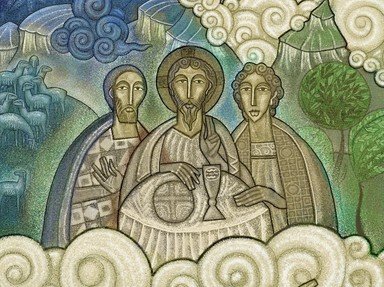 My husband gifted me with a wonderful new Bible. It is a New King James version and contains many study guides. The word origins included here are strictly the opinion of this particular translation of the Bible. Let's take a look...

Quiz Answer Key and Fun Facts
1. I just learned about this word translated from a Latin term meaning to "set apart". It is often used to signify those that are like God and therefore holy; in English, it now means "to make holy". Can you name this word?

Your study verses for this word: 1 Thessalonians 4:3,4 & 7; Romans 6:19, 22 and Hebrews 12:14-17. These verses admonish the reader to separate him or herself from unseemly ways.
2. Another interesting Bible word comes from several related Greek words and means "the practice of worshipping idols". About which of the following words did I just learn?

The best discussion on idolatry is given by Paul in First Corinthians. Paul warns all believers to beware of associating with those who called themselves believers, but who still worshipped idols. Study verses for this word are: 1 Corinthians 10:14 & Colossians 3:5.
3. This word is derived from a Greek verb meaning "to acquit" or "to declare righteous". A noun form of it is used in courtroom settings. What is this word?

Christianity teaches that the Law of God was not given to justify people, but to expose their sins. God sent His Son to die for these sins that humanity may know justification. When someone believes in Jesus, the righteousness of God becomes part of them and they are therefore declared righteous before Him. Suggested study verses: Romans 4:25 & 5:18-19.
4. Cooking fans should recognize this word that was used in several places in the New Testament as a metaphor for "an invisible, pervasive influence". What word would this be?

In Mark chapter 8, Jesus warned, "Take heed, beware of the leaven of the Pharisees and the leaven of Herod." The use of the word "leaven" here was an appropriate imagery to use in describing the control the religious leaders of the day had on the people. Just as the leavening ingredient in bread dough permeates the entire batch, so do ideas affect our minds. Study verses for this word: Mark 8:11-21; Matthew 13:33 and Galatians 5:7-15.
5. Here's a word that is derived from the Hebrew verb 'marar' which means "to be bitter". What is this word that was given as a gift?

The resin made from the gum or sap of an Arabian balsa tree could be pressed and mixed with oil to make perfume and lotion. Myrrh was one of the gifts bestowed on the Christ child by the Wise Men. Myrrh is mentioned in the Bible in the following verses: Song of Solomon 3:6; Exodus 30:23 and Psalms 45:8.
6. This emphatic word comes from the Hebrew verb 'salal', meaning "to lift up". We could use this in singing praises to God. What is this word?

Found 39 times in the book of Psalms and also in the book of Habakkuk, it is commonly thought that the writers meant for one to lift up one's thoughts to God. Some scholars however, believe that it is a way of denoting a musical pause or key change. Bible verses featuring "Selah" are: Psalms 39:5 & 11 and Habakkuk 3:3,9 & 13.
7. Here's a word with two entirely different meanings, but only one meaning reflects its origin: a Hebrew root word meaning simply "to abstain from food". Which of the following is this word?

At times, fasting can mean abstaining from food, but can also mean abstaining from drinking, bathing, sex, or any number of practices. Fasting was a common practice of the ancient world at times such as mourning and intercessory prayer. It was also required at such times as the Day of Atonement. Passages to study are: Esther 4:15-17 and 2 Samuel 12:15-23
8. There is a Hebrew word translated from another Hebrew word for "ten". We use this word to describe our giving to the kingdom of God. What is the word?

In Genesis 14:20, Abraham set the precedent for the giving of tithes when he gave a tenth of his wealth to Melchizedek. According to the Law, the Israelites were to give a tenth of their annual intake to God. This amount was considered holy. Malachi declared that failing to tithe constitutes robbing God. Learn more with these verses: 2 Chronicles 31:5-12 and Genesis 14:18-20.
9. An interesting, but often misunderstood word, is this Hebrew word that generally means "an agreement between two or more parties". What word am I describing?

For the most part, covenants were made between God and someone. Often, God used a covenant as a way to draw fallen humanity back to Himself. Probably the most well-known covenant God made with man is the rainbow. God used the rainbow as a unilateral promise that He would never again flood the earth.

This particular covenant did not require man to do anything in order for God to uphold His end of the promise. References can be found in 2 Samuel 3:12 and 23:5; Genesis 6:18 and Jeremiah 31:31.
10. Finally, I am thinking of a Hebrew word meaning "to gather together' or "to pick up". What word is this?

In the Old Testament, people gleaned money, stones, manna and even other people. The word is used 34 times as a verb in the Old Testament, with 12 of those occurances being in the book of Ruth. Other verses mentioning this word are: Leviticus 19:10 and 23:22.

I sure hope some of these definitions helped you as much as they helped me. A good study Bible is a wonderful tool. The more I read the word of God, the more is revealed to me.

Thanks for playing my quiz and may God bless you abundantly!
Source: Author cat_brat63 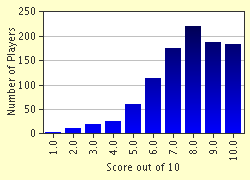