Most people will be familiar with the events in this quiz. I have taken five from the Old Testament and five from the New. The King James Version is used throughout.

Quiz Answer Key and Fun Facts
1. In the Garden of Eden there was a tree, the fruit of which was forbidden to Adam and Eve. How was this tree referred to in the Bible (King James Version)?


Answer: the tree of the knowledge of good and evil

Many people think that it was an apple which Eve picked and shared with Adam but the Bible doesn't identify the tree or its fruit. (See Genesis, chapter 2, verse 17.)
2. In Deuteronomy, chapter 34, we can read how Moses went up from the plains of Moab to the top of Pisgah where the Lord showed him all the lands spread out beneath him - the lands which he had promised to Moses' forefathers. What did Moses do then?

We can read, in the same chapter, that Moses died there in the land of Moab at the grand, old age of 120 years, without ever setting foot in the promised land. He was buried there and it is written, '--- no man knoweth of his sepulchre unto this day'.
3. When the Philistines sent their battle-hardened champion, Goliath, a giant of a man, to challenge the Israelites, who took up the challenge and how did he kill Goliath?


Answer: David with a sling

This well-known story can be read in the First Book of Samuel, chapter 17.
It tells how the young, ex-shepherd boy, who had successfully defended his sheep against dangerous predators, refused to wear armour and, trusting in the Lord, went out with a sling in his hands and stones which he'd picked out of a brook.
4. Two women and a baby appeared before the judgement seat of King Solomon. Each woman was claiming the baby was her own son. In the First Book of Kings, chapter 3, verse 24, we read how Solomon called for a sword to be brought to him. What did he say he was going to do with the weapon?


Answer: divide the child in two

This familiar story shows us the wisdom of Solomon. The real mother was willing to give up her child to the other woman, to save the infant's life. The other woman agreed that the child should be divided so that it would belong to neither of them. Solomon, of course, knew that this would happen and he gave the child into the real mother's custody.
In the words of the Bible: 'And all Israel heard of the judgement which the king had judged; and they feared the king: for they saw that the wisdom of God was in him, to do judgement.'
5. When Shadrach, Meshach and Abed-nego were cast into the burning, fiery furnace, Nebuchadnezzar could see a fourth figure walking in the middle of the fire with the three men who had been thrown into the furnace. What did he say the form of the fourth figure looked like?


Answer: the son of God

Their refusal to worship Nebuchadnezzar's golden image, which he had set up, was the reason why these men were cast into the furnace. After they walked out from there, totally unharmed, Nebuchadnezzar said, 'Blessed be the God of Shadrach, Meshach and Abed-nego', and he decreed that the God of these three men should be honoured by all people.
Look in the Book of Daniel, chapter 3, to find this story.
6. Is the following statement TRUE or FALSE, according to the text of the Bible? Three wise men from the east came to find the new-born King of the Jews and, when they found the infant lying in a manger, they fell down and worshipped him.

The Bible does not mention how many wise men there were. We read that three gifts of gold, frankincense and myrrh were presented and so this is probably why it is assumed that there were three men. The above statement is also false because the wise men found the baby they were seeking in a house and not in a manger.
You can find this story in the Gospel of St. Matthew, chapter 2.
7. Jesus' parents once lost their son on a journey from Jerusalem to Nazareth. They couldn't find him amongst all their friends and relatives who were travelling with them and so they returned to Jerusalem where, after a three-day search, they found him. Where was he?


Answer: in the temple

Jesus was 12 years old when this happened.
His parents found him - as it is written in Luke's gospel, chapter 2, verses 46 and 47 - 'sitting in the midst of the doctors, both hearing them, and asking them questions. And all that heard him were astonished at his understanding and answers.'
8. What word is missing from the following, well-known quotation? It is from 'The Sermon on the Mount' (King James Version) when Jesus was teaching his disciples. 'Let your light so shine before men, that they may see your good works, and ___ your Father which is in heaven.'

These words of Jesus are in the Gospel of St. Matthew, chapter 5.
9. According to the text of St. Mark's gospel, what did Judas Iscariot do with the thirty pieces of silver which were paid to him when he betrayed Jesus?


Answer: He returned them to the chief priests and elders.

In St. Mark's gospel, chapter 27, verse 3, we read 'Then Judas, which had betrayed him when he saw that he was condemned, repented himself and brought again the thirty pieces of silver to the chief priests and elders.' When they refused to take back the money, Judas threw it down on the temple floor. He then went out and hanged himself.
10. Ananias, who lived in Damascus, had a vision in which the Lord spoke to him saying, 'Arise, Ananias and go into the street which is called Straight and inquire in the house of Judas for one called Saul of Tarsus for behold, he prayeth.' Why did the Lord send Ananias to find Saul?

Look in the Book of Acts, chapter 9, to find the story of the conversion of Saul, who was later known as Paul and was the author of most of the Epistles in the New Testament. The little story of how Ananias helped Saul is there too.
Source: Author Jomarion 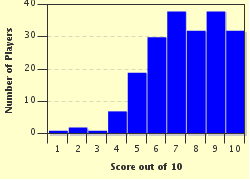 
Other Destinations
Explore Other Quizzes by Jomarion