Figure out the person, topic, Bible section, or story from the three clues given. Have fun!

Quiz Answer Key and Fun Facts
1. 1. I only have a few sentences written about me. They're in I Chronicles. 2. My prayer to God to stretch my boundaries has made me the subject of a few books for all ages. 3. My name means pain. Who am I?

His prayer can be found in 1 Chronicles 4:9-10. The books written about him are by Bruce Wilkinson and include "The Prayer of Jabez" and "Beyond Jabez" among others for teens and children.
2. 1. I am a son of David. 2. I was extremely vain and disloyal to my father and caused a lot of problems because of my selfish ways. 3. I was killed by Joab, one of David's commanders, with three spears.

Absalom really wanted to be king and to succeed David's throne. He went to such great lengths in his effort, including killing his own brother, Amnon, in 2 Samuel 13. 2 Samuel 18 tells how Absalom was slain after a rebellion.
3. 1. I am a book of the Bible, among the prophets. 2. My book starts with a prophecy about a drought or famine and a plague of locusts. 3. My name is usually interpreted as "Yahweh is God." What book am I?

Quotes from the book of Joel can be found in the New Testament in Acts 2:17-21 as well as Romans 10:13.
4. 1. This story can be found in Ezekiel 37. 2. This is the prophecy of the Jews returning to Israel, the promised land. 3. During this story, the Lord is speaking directly to the prophet and telling him what to do. What Old Testament story am I?


Answer: The valley of dry bones

The Lord speaks directly to Ezekiel in this vision. Ezekiel speaks out to a valley of dried up bones and makes them grow tendons and skin and come back to life.
5. 1. I was one of the 12 disciples of Jesus. 2. I credited with writing two books in the New Testament. 3. I was a fisherman before I met Jesus and became a follower of Him.

Peter was born as Simon and his name was later changed to Peter. He and his brother Andrew were fishing when Jesus came and told them to come and be "fishers of men" (Matthew 4:19).
6. 1. Although there are many promises of blessings throughout the Bible for various reasons, I am the only book of the Bible that promises a blessing to those who simply read the text. 2. My pages contain only apocalyptic literature. 3. Some of the earliest manuscripts of this book are titled the Apocalypse of John. Which book am I?

Revelation is the only book of the Bible to be completely composed of apocalyptic literature and teachings.
7. 1. Chapter 13 of I Corinthians is about this topic. 2. When a lawyer tests Jesus by asking what the greatest commandment is, Jesus's responses both contain this topic. 3. Many of the Psalms also contain this topic. What am I?

I Corinthians 13 is a very famous section of the Bible and is very commonly read during a marriage ceremony. Matthew 22:37-39 give Jesus's responses to the lawyer.
8. 1. This is the longest chapter of the Bible. 2. This chapter is written as an acrostic poem. In each stanza, each line begins with the same letter of the Hebrew alphabet. 3. Almost every verse contains a synonym for the Torah. Which book and chapter am I?

Psalm 119 contains 176 verses divided into 22 stanzas of 8 lines each. It is the prayer of someone who delights in the Torah or the laws of God. The entire psalm has been set to music.
9. 1. My name means "wished-for child," "bitterness," or "lifted up." 2. Moses and Aaron were my brothers. 3. I'm the one who hid Moses, at my mother's request, along the river to save him from the Pharaoh's order to kill all the baby boys.

Miriam watched in Exodus 2 as Pharaoh's daughter discovered Moses in the river. She later suggested that she hire a nurse to care for their newly adopted baby, and went further to suggest Jochebed, his birth mother.
10. 1. My first Bible appearance is in the Book of Acts. 2. Paul asked me to accompany him on his second missionary journey to Derbe, Lystra, Troas, Phillipi, Thessalonica, and Beroea. 3. I was in prison with Paul, praying and singing to God, when an earthquake came, opened the prison doors, and broke the chains.

Paul and Silas, along with the rest of the prisoners, remained in their jail cells even after the doors were opened by the earthquake. They used this time as a testimony to speak to the guard about Jesus. (Acts 16)
Source: Author rsantan 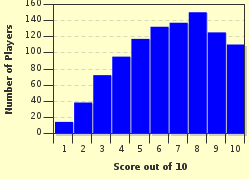 Related Quizzes
1. Biblical Definitions Average
2. Husbands and Wives in the Bible Easier
3. Bible Verses Easier
4. English Bible Translations Difficult
5. The King James Bible Very Difficult
6. King James Bible: Do You Know The Order? Average
7. Genesis: In the Beginning Average
8. The Gospel According to Aslan Tough
9. Craigslist meets Qumran Average
10. For the Bible Tells Me So Tough
11. Bread in the Bible Average
12. 25 Miracles in the Bible -- 'A' Through to 'Z' Average


Other Destinations
Explore Other Quizzes by rsantan