Genesis: In the Beginning Trivia Quiz

The book of Genesis tells the beginning of all things, including the universe, life, man, death and sin. I used the New American Standard Bible as my guide. Hope you enjoy this one!

Quiz Answer Key and Fun Facts
1. Which one of the four rivers was not a division of the river flowing out of Eden?

The river out of Eden divided into four rivers. The Pishon flowed around Havilah. Gihon was around Cush and the Tigris flowed east of Assyria. The fourth was the Euphrates. (Genesis 2:11-14)
2. When Cain left the presence of the Lord, where did he settle?

After Cain murdered his brother Abel, he was cursed by God and left him. He settled in Nod, which was east of Eden. (Genesis 4:16)
3. Which was not one of Noah's sons?

Seth was the son of Adam and Eve. He was born after the murder of Abel. Shem, Ham and Japheth were sons of Noah. (Genesis 6:10)
4. During the time of Noah, how long did it rain when God flooded the earth?

Lot was Abram's nephew. He was the son of Haran, Abram's brother. When Abram left his homeland, Lot went with him. (Genesis 11:27)
6. What was Abram's home city, where he and his brothers were born and where his brother Haran died?

He was from Ur. He lived there with his father, Terah, and brothers Nahor and Haran. God sent Abram out of Ur to a land that he wanted to show him. (Genesis 11:31)
7. When Abram and Sarai came close to Egypt, who did he tell Sarai to say she was?

Sarai was beautiful. Because of her beauty, Abram thought the Egyptians would see her and want her for their own. So that he wouldn't be killed, he told her to pose as his sister. She obeyed. When Pharaoh took her, he gave Abram sheep and oxen in return but God cursed Pharaoh. (Genesis 12:11-13)
8. How old was Abraham when he was circumcised?

God made a covenant with Abraham promising him land and multiplying nations. In return, all men had to be circumcised, as well as all newborn boys once they reached 8 days old. Abraham was 99 years old when he was circumcised. (Genesis 17:24)
9. What was the name of the field where Abraham buried Sarah?

Sarah was buried in the cave of Machpelah in Ephron's field. Abraham paid 400 shekels of silver for that land and cave. (Genesis 23:15-20)
10. Whom did Isaac marry? 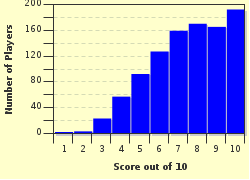