These "Dead Sea Personals" were found recently in a long buried jar where they languished, rolled up in the desert, until just recently. Who would have posted or responded to the following personal ads?

Quiz Answer Key and Fun Facts
1. Who responded to this personal? "Single male seeks Single Female for long walks in my perfect world. I am looking for someone who shares my passion for gardening and who can make a killer fruit salad. Other hobbies include naming things and wandering alone aimlessly. Good sense of humor a must. I hope you can take a good ribbing."

Eve is known by two names. "Ishshah" means "woman", but is not so much a given name as it is a descriptive word that implies that she was created to have a unique relationship to Adam. "Eve" means "life" and indicates that it is from Eve that all successive generations emanate. So there you have it in a word or two.

A short nap, a 'ribectomy' and voila! - the delightful lifetime partner who brings forth life. Neat trick.
2. Who responded to this ad?: "Spry, patriotic outdoors gal in search of man for outdoors fun. I'm into camping, hiking, and very handy with a tent peg!"

Jael was the wife of Heber the Kenite in the days of Deborah, one of Israel's greatest Judges. After the defeat of the Canaanites by Barak, Sisera, the captain of the Canaanite army, ran and wanted to hide amongst the Kenite tribe. Jael invited him into her tent for a refreshments and nap time.

As Sisera lay sleeping (he'd done plenty of running around and gotten lots of fresh air that morning) Jael drove a tent stake through his temples, pinning his head to the ground. When Barak showed up in pursuit, she brought him into the tent for show and tell.
3. Who responded to this? "Tired of games? This handsome, ripped Male is seeking good times with the right Female. I don't want someone to jaw like an ass, I'm just into casual encounters - I've been burned before. Confidentiality is a must."

Delilah was a Philistine woman of the Sorek Valley who was known for her good looks, her charm, and her effectiveness with powerful men. She was engaged by the Philistine leaders to discover the Secret of Samson's strength in the hopes of bringing about his defeat.

After multiple visits, Samson, in a moment of intimate indiscretion told Delilah that the secret to his strength was in his hair. She called her servant in to cut his hair from his head, and Samson was rendered powerless and taken by the Philistines.
4. Who placed this ad? "Older gentleman seeks Female for traveling companion, maybe more. A delightful laugh is a must. Do you believe the impossible can come true? Then you're the woman for me. I'm into role playing. You must be too."

As Abraham began to encounter more and more people outlying Egypt near the end of his long journey from Sumeria, he became increasingly concerned that Sarah's beauty and desirability could be the cause of his demise. He was in real danger of being killed for his wife.

His response was clever and telling of his personality. By pretending that Sarah was his sister, rather than his wife, the customs of the day dictated that suitors would lavish him with riches for the right to court her. Eventually, her beauty came under the scrutiny of the Pharaoh, who rewarded Abraham handsomely.

When his deception was discovered, Sarah was returned to him, but he was allowed to keep his parting gifts which consisted of livestock and slaves. Shrewd, no? I think yes!
5. Who responded to this personal? "Well bred Female seeks older, successful professional gentleman to care for her every need. I'm looking to have a late life baby. I hope you will oblige. The perfect man will be hard working and religious, oh and the less conversation, the better!"

Elizabeth was respectable and well-connected, having descended from Levites. Her husband Zechariah was a priest as well. Together, they enjoyed a high social status. Elizabeth became pregnant late in life - at the same time as her much younger cousin Mary - and gave birth to John the Baptist, who wasn't a Baptist at all until well after he was out of diapers.

Her husband Zechariah was struck dumb temporarily, ensuring many quiet nights at home - just the sound of the crackling fire and the clacking of the knitting needles during the last trimester of Elizabeth's pregnancy.
6. Who responded to this ad? "Female who knows the meaning of loyalty has recently gotten out of a long term relationship and moved to the area. In search of successful Male that enjoys curling up and cuddling all night long. Let's see what develops."

Boaz was a resident of Bethlehem and kinsman of Elimelech, Naomi's husband. He was a man of position and wealth. When the widow Ruth went to glean from his field, Boaz liked what he saw and set her up at his place. While she was supposed to be sleeping with the workers, Boaz woke up one night to find Ruth curled up at his feet.

He said "Stop! You had me at ... " (whatever it is that Ruth might have been saying in her sleep.) Following the arcane rituals of kinship and Mosaic law, Boaz worked it all out and married Ruth. Together, they begat Obed who begat Jesse who begat King David.
7. Who placed this ad? "Bored army wife in search of no strings attached fun while hubby is away. I am attractive, calculating and clean and discreet. You be too."

Bathsheba is most likely not the innocent victim of King David's desire that most assume. She would have been well aware that her choice of bathing time and place was royally exhibitionist. After the arranged death of her husband Uriah, Bathsheba married David and she gave birth to royal heirs.

When David was no longer virile enough to be considered king, Bathsheba acted swiftly through her powerful allies to have favored son Solomon installed as King and herself as Queen Mother - a position she solidified by falsely accusing her step-son Adonijah of treason.
8. Who placed this ad? "You got what I want, I got what you need! Older financially secure gentleman loves to party and seeks attractive young woman for marriage who can go behind me and cover for my social gaffs. You don't have to be a drinker as long as I can still tie one on!"

Nabal was a Maon rancher who owned 3,000 sheep and 1,000 goats. His greatest possession was his intelligent and beautiful wife Abigail. Despite his wealth, Nabal was surly and evil. When David's men came around looking for protection money, Nabal balked, not trusting that these men were really David's servants.

He foolishly made disparaging remarks about David and his ancestry as he sent them on their way. Abigail, immediately realizing his fatal error, took steps to ingratiate herself to David - eventually to the point of becoming his wife. Nabal died from the shock of realization.
9. Who placed this ad? "Father of six seeks long term relationship and possibly marriage with the right woman. I have been married to the wrong woman for seven years! You must enjoy traveling and sleeping outdoors. I've really been wrestling with this, so serious inquiries only."

"It's sad to belong to someone else when the right one comes along." Jacob, having cheated his twin brother Esau out of his birthright has, in turn, been tricked by Laban into marrying his older, uglier daughter Leah. Jacob, after working off 14 years of indentured servitude and fathering six children with Leah is hankering to marry Rachel. Jacob's children with Leah were sons Reuben, Simeon, Levi, Judah, Issachar, Zebulun, and a daughter, Dinah
10. Who responded to this personal? "I'm a fun-loving girl who plays hard and likes to be treated like a queen! I'm alluring and a great talker. I love getting to know lots of other men and I like outdoor activities. Nothing beats getting all dolled up and going to the dogs!"

Jezebel was the wife of King Ahab. She was a Phoenician who was dedicated to the worship of Baal, a fertility god. Baal worship contained sexual immorality and infant sacrifice. In fulfillment of Elijah's prophecy, Jezebel was tossed from her window by eunuchs, dashed to pieces in the street. Her remains were trampled by war horses and eaten by dogs.
Source: Author sidnobls 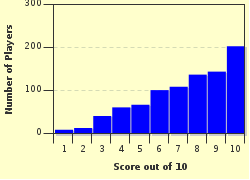 Related Quizzes
1. Biblical Definitions Average
2. Husbands and Wives in the Bible Easier
3. Bible Verses Easier
4. English Bible Translations Difficult
5. The King James Bible Very Difficult
6. Guess the Bible Story from Three Clues! Average
7. King James Bible: Do You Know The Order? Average
8. Genesis: In the Beginning Average
9. The Gospel According to Aslan Tough
10. For the Bible Tells Me So Tough
11. Bread in the Bible Average
12. 25 Miracles in the Bible -- 'A' Through to 'Z' Average


Other Destinations
Explore Other Quizzes by sidnobls