The Gospel According to Aslan Trivia Quiz

The Narnia Chronicles have long been a great favourite, suitable for everyone. Many have seen parallels in these stories to the Bible, and this quiz explores a few that I have come across. I used the RSV and the English edition of the Chronicles.

Quiz Answer Key and Fun Facts
1. When the serpent tempted Eve he was very careful to keep his words truthful - it was a masterful piece of manipulation designed to fool her into believing him and tasting the fruit. A similar story is found in 'The Magician's Nephew' where Digory is in conversation with Jadis over the Apple in his pocket. What did Jadis say which stopped him from taking the Apple home to his mother?


Answer: "You needn't take the little girl back with you, you know."

Just as the serpent in Genesis 3:4-5 spoke the truth when he said, "You will not die; for God knows that when you eat of it your eyes will be opened, and you will be like God, knowing good and evil", Jadis also was truthful when she said, "It is the apple of youth, the apple of life. I know, for I have tasted it; and I feel already such changes in myself that I know I shall never grow old or die".

The difference between the serpent and God, and Jadis and Aslan, is that they only tell part of the truth to manipulate.
2. In the chapter 'How Bree became a Wiser Horse' the proud war stallion Bree met Aslan for the first time. Bree had sung the praises of the land of Narnia throughout 'The Horse and His Boy', telling Shasta about the Talking Beasts who lived in freedom. He did not believe, however, that Aslan was really a Lion, and an important lesson was learned when he came face to face with the Lion himself and was challenged to touch his body. Which Biblical character had an experience which mirrors this part of Bree's history?

Thomas was not with the other Disciples when Jesus first appeared to them in the upper room and stated firmly that he did not believe that he had risen, and would not believe until he had seen the risen Christ with his own eyes and touched his flesh. A week later Jesus challenged him to touch his wounds to satisfy his doubting spirit and believe. (John 20:24-29)
3. Lucy was called by Aslan in the middle of the night in 'Prince Caspian' - something similar to the incident when the young Samuel is called to speak to God in the dark hours. Which of the following statements is true?


Answer: Samuel was sleeping near the Ark of the Covenant

Lucy set about waking everyone else up to start walking towards Aslan's How after she spoke with Aslan; they were not happy about it, because they could not see the great Lion, but went with her. This part of Samuel's story can be found in 1 Samuel 3:2-18, and there you will read that he was sleeping in the temple of the Lord, and originally thought that it was the old priest, Eli, who was calling him in the middle of the night. Eli was the one who told him that it was God speaking to him.
4. Given that Paul the Apostle persecuted Christians (Acts 9:1) before his miraculous encounter on the Damascus Road (Acts 9:3) and subsequent conversion (Acts 9:17-18) when the scales fell from his eyes and he was baptized (Acts 9:18), and that he went on to evangelise the known world (Acts 14;1-7 among others), which of the children would you say most closely resembles this biblical character?

Although Edmund was a traitor at the beginning of 'The Lion, the Witch and the Wardrobe', his 'conversion' was not miraculous, nor did he evangelise afterwards. Both Jill and Polly were on the side of right from the beginning, but Eustace was described as a persecutor almost from the moment we are introduced to him. Having overheard his cousins talking about Narnia during a previous holiday, he teased them about their 'imaginary' adventures. During his trip on the Dawn Treader he became a dragon due to his 'dragonish thoughts' and was changed back to a boy by Aslan in a private encounter when his scaly dragon's skin was removed and he was washed in a pool. Eustace was the only one of the children to speak to another child (Jill) about Aslan and Narnia, thus also making him an evangelist.
5. Which biblical King put things in Jerusalem back to rights in a similar way to what King Caspian did in the land of Narnia?

King Josiah was eight when he became King of Judah, but it was not until he was twenty-six that the Book of the Law was found. After it had been read the King and the Priests realised how far the nation had strayed from God's way and turned the country around to follow God's Law again (2 Kings 22:1 - 23:25).

Although King Caspian did not re-establish a religion, he was the king-pin in the turnaround which brought Old Narnia out of hiding and to living openly with the humans who once denied their existence.
6. After the Resurrection Jesus appeared to the Disciples and his followers many times; on one of these occasions they were out fishing and saw Jesus on the shore. Peter jumped out of the boat and swam ashore to him to see that Jesus had lit a fire and was cooking breakfast (John 21:1-14). Which of the children had a similar experience (but for the swim!)?

At the end of 'The Voyage of the Dawn Treader' the three children came across a snowy white Lamb beside a camp fire on which fish was cooking. The Lamb turned into Aslan as he was speaking, and he said of our world, "There I have another name. You must learn to know me by that name.

This was the very reason why you were brought to Narnia, that by knowing me here for a little, you may know me better there' when Lucy lamented that she wanted to see Aslan again and couldn't if she wasn't to return to Narnia.
7. When Peter, Susan and Lucy are walking to meet with Aslan they meet Father Christmas, who gives them special Gifts which become part of Narnian history. Peter's sword defeats the Wolf and Aslan knights him with it, Susan's Horn is the means of bringing the children back to Narnia to help Prince Caspian and Lucy's cordial is used when she is sailing on the Dawn Treader as well as after various battles. Spiritual Gifts are mentioned in the New Testament, including 1 Corinthians 12. Verse 11 shows that the Gifts of the Spirit are similar to the Gifts given in 'The Lion, the Witch and the Wardrobe', but in what way?


Answer: they are all given to each individually according to the giver

It is easy to see Lucy's cordial as the Gift of Healing, but not so easy to identify the other Gifts; 1 Corinthians 12 lists them as Wisdom, Knowledge, Faith, Healing, Miracles, Discernment, Tongues and Interpretation. Verse 7 says 'To each is given the manifestation of the Spirit for the common good', which covers the Gift of Susan's Horn. Peter's Sword and Shield could be referenced to the Armour of God as listed in Ephesians 6:16-17.
8. Only twice did any characters pray to Aslan throughout the Chronicles. One took place in the final book, 'The Last Battle', when King Tirian was tied to a post and appealed to Aslan to save him and the rest of Narnia, and if he could not come in person, to allow his voice to travel across the worlds to speak to the Friends of Narnia himself. Did Aslan grant his request?


Answer: sort of - he could be seen by the Friends of Narnia, but he was unable to speak

Prayer for deliverance of a nation is not a new idea. At least three of the Psalms are prayers for Israel, (70, 74 and 79), and Jesus very likely included prayers for the Jewish people when he went off to pray alone.

The other incidence of prayer in the Chronicles was when Lucy was on board the Dawn Treader, and she called out to the Lion to save them from the darkness of the 'Island where Dreams come True'. Lucy had also spoken to the trees in 'Prince Caspian', hoping to wake them up, but as she was not talking to Aslan himself, I do not count this as 'prayer' in the biblical sense.
9. Both the Narnia Chronicles and the Bible have a good share of memorable characters; which of the following pairs could be considered to be alike, given that both are pessimistic and inclined to gloominess?

The other given pairings could be considered alike as well, but not for the reasons stated (David and Caspian were both Kings who were chosen as youths, King Frank was the first Human resident of Narnia along with Queen Helen, and Peter was asked to close and lock the stable door in 'The Last Battle', just as Simon Peter was given the keys of the Kingdom of Heaven, as recorded in Matthew 16:17-20), but it is the pairing of Puddleglum and Jonah that matches the description of pessimistic and inclined to gloominess.

However, Jonah chose to run away from the job he was given, while Puddleglum teamed up with Eustace and Jill even though he constantly referred to the mission as impossible.
10. When people think of biblical connections with the Narnia Chronicles, one incident is likely to spring to mind before any other - Aslan's sacrifice in 'The Lion, the Witch and the Wardrobe'. There are many parallels but also a lot of poetic licence if one wanted to compare the two objectively. Which of the following statements is true of the Biblical account of Jesus' death and resurrection, but not true of the story of Aslan's death and resurrection?


Answer: He was taken from the place of execution and placed in a grave

Aslan was unbound by mice, but the girls did not move him from the Stone Table, whereas Jesus was placed in a grave supplied by Joseph of Arimathea (John 19:38-42). There is a little dispute over which women came to the grave on the third day, but none whatsoever about the fact that it was the women who first saw the empty grave (Matthew 28, Mark 16, Luke 24, John 20); Susan and Lucy had moved away from Aslan's body, then ran back when they heard the loud noise of Aslan's resurrection. Aslan did not say a single thing while he was with the forces of evil around the Stone Table; Jesus did not respond at all to the taunts, although he did speak before and during the crucifixion (Matthew 27, Mark 15, Luke 23, John 19).

When Jesus died the curtain which hid the Holy of Holies in the Temple was ripped from top to bottom (Matthew 27:51), and when Aslan came back to life the Stone Table was broken into two.
Source: Author ArleneRimmer 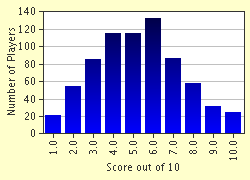 
Other Destinations
Explore Other Quizzes by ArleneRimmer