A version of the Bible appeared in the 17th century which is still widely read today. How much do you know about it? Try these multiple choice questions using English spelling. All quotes taken from The King James Bible.

Quiz Answer Key and Fun Facts
1. English translations of the Bible were in existence before the advent of the King James Bible. On which Bible is the King James version mostly based?

Work began on the translation in 1604. It was first published in 1611.
3. How many scholars were involved with the work of translation for the King James Bible?

The correct answer is 47, although it was intended there should be 54.
4. Which Greek texts were used for the New Testament translation of the King James Bible?

Textus Receptus is the name given to the body of printed Greek texts of the New Testament which were used for translations by Luther, Tyndale, and later the Scholars appointed by King James.
5. The epistle dedicatory of the King James version of the Bible praises the King's predecessor Queen Elizabeth. It refers to her as being what?

In the opening paragraph of the epistle dedicatory to King James, the late Queen Elizabeth is referred to as "that bright occidental star".
6. The idea for a new translation of the Bible was put to King James in 1604. What was the reason given for this?


Answer: Previous versions were considered to contain omissions and inaccuracies.

The King was persuaded that a new translation of the Bible was necessary at a conference held at Hampton court in 1604.
7. We know it as the King James Version of the Bible, but when was it first referred to as such in print?

I have yet to find out why, but the first time the King James Bible was referred to as such in print was 1884.
8. Let's consider archaic words. The word "asswaged" appears in the Kings James version of the Bible. What does "asswage" mean?


Answer: To abate or subside

Genesis 8:1 reads "And God remembered Noah, and every living thing, and all the cattle that was with him in the ark: and God made a wind to pass over the earth, and the waters asswaged."
9. More archaic words and phrases in the King James Bible: in Paul's epistle to the Romans, he says that he "was let hitherto". What does he mean by this?


Answer: He was hindered

Romans 1:13 reads "Now I would not have you ignorant, brethren, that oftentimes I purposed to come unto you, (but was let hitherto)."
10. One more archaic word: in the King James Bible, the word potsherd is used to describe what?

Job 2:8 -- "And he took him a potsherd to scrape himself withal; and he sat down among the ashes."
Source: Author Hinds-feet 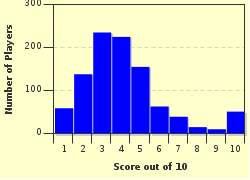 
Other Destinations
Explore Other Quizzes by Hinds-feet