There were many important, well-known women in the Bible. See if you can remember them from the Bible stories that you might have heard before. *Please Rate this Quiz Afterwards!*

Quiz Answer Key and Fun Facts
1. This woman was from the Valley of Sorek. Some Philistines came to her and offered her silver if she could find the secret to the strength of an extraordinarily strong man. Who was this woman?

Samson and Delilah! Samson lost his strength after the Philistines cut off all his hair. Of course, it wasn't the short hair that made him weak but the promise with God that he broke. (Judges 16)
2. This woman poured expensive perfume on Jesus' feet and wiped them with her hair. What was her name?

Martha, who was Mary's sister, scolded Mary for not helping her prepare dinner. However, Jesus said that Mary was doing right by listening to him preach because the eternal is always more important than the earthly. (John 12:1-8)
3. This woman hid two Israelite spies in her house in Jericho. Later, when the Israelites invaded this city, this woman and her family were spared. What was her name?

It says in James 2:25, "Was not even Rahab the prostitute considered righteous for what she did when she gave lodging to the spies and sent them off in a different direction?" God used Rahab to help the spies and he rewarded her and changed her life. (Joshua 2)
4. She was tricked into do something God forbade. She persuaded her husband to do the same. God punished them. What was her name?

Eve was deceived by the serpent to eat from the Tree of the Knowledge of Good and Evil. She also gave some of the fruit to Adam. Because they disobeyed God, they were banished from the Garden of Eden. (Genesis 3)
5. King David committed adultery with this woman and then sent her husband to be killed in battle. What was her name?

God punished David for committing adultery. God killed the firstborn of King David and Bathsheba. In the end, David completely repented and married Bathsheba. They had other children, one of whom was Solomon, who eventually became king. (2 Samuel 11)
6. She became a mother at a very old age. She was the mother of Isaac. Who was she?

Sarah's husband was Abraham.
7. This woman followed her mother-in-law to Bethlehem after her husband passed away. She was the mother of Obed.

She was then married to Boaz there. (Book of Ruth)
8. According to the Gospel of Matthew, Mary was a virgin when she was pregnant with Jesus, and she was not married to Joseph when the Magi came to visit them.

She was married by then. Mary's husband was Joseph, who was a descendant of David. In Matthew 1:24-25 it says, "[Joseph] took Mary home as his wife. But he had no union with her until she gave birth to a son." (Matthew 1:16-25)
9. Esther Part One: Queen Esther was the replacement of this Queen who had disobeyed King Xerxes.

Vashti was banished from the kingdom. (Esther 1-2)
10. The Story of Esther, Part Two: Two men had conspired to murder the king. Mordecai found out about the plot and alerted the king, Esther's husband. The plot was unsuccessful. What were the names of the two men?

Mordecai's reward was riding around the city on the king's horse. (Esther 2:19-23)
11. This woman was the sister of Lazarus. She was very caught up with preparing dinner for Jesus when he came to her house.

Mary was the one who sat and listened to Jesus' teachings. (Luke 10:38-42)
12. Jacob worked seven years for Laban in exchange for marrying this woman (Laban's daughter). However, Laban tricked Jacob and gave Jacob his other daughter instead. Jacob then had to work seven more years for the woman that he wanted. Who was this woman that Jacob wanted to marry?

Elizabeth was married to Zechariah. (Luke 1:5-58)
14. After her husband and her sons died, this woman was prepared to go back to her hometown (Bethlehem). She also told her daughters-in-law to go back to their homeland (Moab) and find other husbands. What was her name?

Naomi's daughters-in-law were Ruth and Orpah. Her sons were named Mahlon and Kilion. (the Book of Ruth)
15. This woman gave birth to twin boys. The younger bought the elder's inheritance. What was her name?

Hope you had fun. **Please rate this quiz!** Her twin boys were Jacob and Esau and she was married to Isaac. (Genesis 27:1-17)
Source: Author sweet_cake 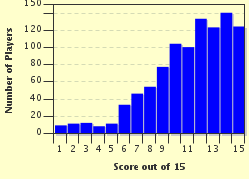 
Other Destinations
Explore Other Quizzes by sweet_cake