These are just a few of the ladies who, in my opinion, did great things in the Bible.

Quiz Answer Key and Fun Facts
1. She was the queen who refused to be shown off at King Xerxes' banquet.

Ironically, her name means "beautiful woman". Xerxes was so angry he sent a decree out that all men should be the head of their own households, and banished Vashti from his kingdom, because he feared other women might emulate her. He then searched for a new girl to be queen. He ended up choosing Esther. You can read about it in the book of Esther.
2. She served as a judge. This title was given to individuals who served as political, military, and spiritual leaders. You go girl!

Her many gifts won her the position usually reserved for men. You can read about her in Judges 4 and 5. There is another Deborah mentioned in the Bible as well. She was the nurse of Isaac's wife, Rebekah (Genesis 35:8).
3. She replaced Vashti, and according to Biblical text, helped save the Jews of Persia from extermination.

Her cousin Mordecai uncovered an evil plot hatched by a man named Haman. Mordecai persuaded Esther to help him, and together they foiled Haman's plot. Haman ended up being hung on the gallows meant for Mordecai. Interesting side note - according to Esther 2:7, she was also known as Hadassah, a name meaning "myrtle". Read all about Esther in the book bearing her name.
4. She was the prophetess present when the baby Jesus was brought to the temple after his birth.

She recognized him as the promised Messiah. This is recorded in Luke 2:36-38.
5. She was a woman of Athens who converted to Christianity about 50 AD, after she heard Paul preach.

It is interesting that she heard Paul preach, because it indicates she was an educated woman valued as a companion of men, rather than just "someone's wife". This is interesting because some people today feel that Paul was a woman-hater, and this particular event could be used to refute such an argument.
6. She was a woman who won affection in Joppa by showing concern for widows and other needy people. According to Biblical texts, when she died, there was such an outpouring of grief that Peter prayed, and she was revived.

Her name actually is the Greek version of the name Tabitha, which means "gazelle". You can read about her in Acts 9:36-43.
7. She was the wife of Heber the Kenite. She killed Sisera, the defeated general of the Canaanites of Hazar.

This was done in a war of liberation led by Deborah. Girls unite! Read about it in Judges 4:17-22.
8. She was the teenage girl who, according to Christian belief, gave birth to a son who would be the Messiah.

Yes, it was Mary. Elizabeth bore John the Baptist, who was a forerunner for Jesus. Martha was the one bustling about when Jesus was visiting, and Mary of Magdalene was one of his other followers.
9. She gave birth to Samuel after praying desperately for a son.

Yep, she sure did. Samuel served as Israel's last judge. Read Hannah's poignant prayer of thanks in 1 Samuel 2.
10. She was a rich woman in Philippi who became Paul's first convert in Europe. She hosted the church that was formed there around 50 AD.

Yep. She was a well-to-do business woman. Scriptures such as these are used by many to support the argument that Paul was not a woman-hater - that the scripture he wrote about women being quiet pertained only to the particular place he was writing to.
Source: Author SonShine77 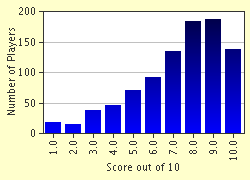 
Other Destinations
Explore Other Quizzes by SonShine77