10 Average Questions about Women in the Bible

How much do you know about women in the Bible? All references are from the New King James Version of the Bible.

Quiz Answer Key and Fun Facts
1. Which woman was the Jewish queen of Persia?

Esther initially hid her Jewish heritage. She revealed her background only when Haman threatened to exterminate the Jewish people. (Reference: Esther 2:5-17)
2. Which woman did Peter raise from the dead?

Dorcas was named as a female disciple who was full of good works and charitable deeds. She was also known by the name Tabitha (Acts 9:36-43).
3. This woman was barren, but when God answered her prayer for a child, she dedicated her newborn son's life to the Lord's work. Who is she?

Hannah is one of the strongest female figures in the Bible, and a prime example of a dedicated mother (I Samuel 1:1-28).
4. Which woman committed adultery with David, but a few years later gave birth to Solomon, the wisest king in the Bible?

From his palace, David saw Bathsheba bathing on her rooftop and was amazed by her beauty. As a result of their affair, David had Bathsheba's military husband sent to the front lines of battle to be killed. However, God allowed David and Bathsheba's first child to die for the consequences of David's murderous sin and their adulterous affair (II Samuel, chapters 11-12).
5. She was an 84-year-old woman who saw baby Jesus when he was brought to the temple for his circumcision.

Anna was widowed after she was married for only seven years, and she dedicated the rest of her life to temple services (Luke 2:36-38).
6. Which woman was a prostitute who married Hosea, the Old Testament prophet?

God instructed Hosea to marry a whore because the Israelites had turned their back on Jehovah and went "whoring" after other gods. As a result of his marriage to the prostitute, Hosea placed himself in God's shoes and discovered how God felt about his people (Hosea 1:1-3).
7. Which woman was a Gentile and the great-grandmother of King David, placing her in the genealogy of Jesus Christ?

Ruth followed her Jewish mother-in-law, Naomi, back to Israel after their husbands died in the land of Moab. Tamar and Rahab were also Gentile women in the ancestral lineage of Jesus, but Ruth was the great-grandmother of King David (Ruth 4:13-22 and Matthew 1:5).
8. Which woman was Jacob's first wife?

Jacob was in love with Rachel, his uncle Laban's younger daughter, and he worked seven years for the privilege to marry her. However, Laban wanted his older daugther, Leah, to wed first, so he deceived Jacob and gave him Leah as his bride. Because the bride wore heavy veils, Jacob did not know the true identity of his wife until the next morning (Genesis 29:16-25).
9. Which woman was Moses and Aaron's sister?

Miriam watched her baby brother Moses when he was placed in the bulrushes and found by Pharoah's daughter (Exodus 2:3-5), and she grew up to be a prophetess (Exodus 15:20).
10. Which woman bore the twins Jacob and Esau?

Rebekah was Isaac's wife, and because she was barren for many years, her only children were the twin sons (Genesis 25:20-26).
Source: Author littlewoman2 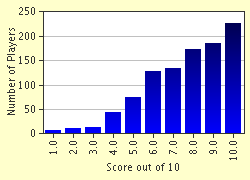 
Other Destinations
Explore Other Quizzes by littlewoman2