Women of the Bible Trivia Quiz

See how well you can identify these women from the Bible.

Michal was King Saul's daughter, given to David despite Saul's jealousy of him.
2. Who helped Israelite spies hide in Jericho?

Rahab was a prostitute, but because of her faith, only she and her family survived when the Israelites attacked and overtook Jericho.
3. What was the name of Rebekah's (wife of Isaac) nurse?

Genesis 35:8 is our only reference to her name, but when Rebekah left to marry Isaac, she took Deborah with her.
4. Who was jealous of her servant, who had borne her husband's first child?

Sarah had Hagar sleep with her husband Abraham because she could not have children, and didn't believe God would open her womb. God did, but only after Hagar's son, Ishmael was born.
5. Which of these women was the sister of Lazarus?

Mary was the second sister of Lazarus.
6. Who was married to Er, slept with his brother Onan, and tricked their father into sleeping with her?

Tamar tricked Judah into sleeping with her because both Er and Onan died, and he denied her her right to children through her marriage into his family. She never technically committed adultery; it was Judah who was in the wrong. She is in the line of Christ.
7. Who allowed a slave to put a ring into her nose as a symbol of her willingness to marry?

Rebekah met Isaac's servant by the well, and agreed to marry Isaac, sight unseen.
8. Whose husband had to work fourteen years to make her his wife?

Jacob had to serve in Laban's fields fourteen years in order to take Rachel as his wife - and even then, only after he had been forced to marry Rachel's sister Leah first (after only seven years of labor).
9. Before King Xerxes married Esther, who was his queen?

Vashti refused to come when Xerxes called for her, so he dismissed her, choosing Esther to be his new queen. Because she became queen, Esther ended up saving Xerxes' life, as well as the lives of her people.
10. Which of the following women slept on a threshing floor with her future husband, so that he would marry her?

Ruth went to Boaz on the advice of her mother-in-law, so he would see her faithfulness, and take her as his wife.
Source: Author valrenee 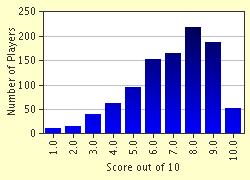 
Other Destinations
Explore Other Quizzes by valrenee