The information for this quiz is taken from the KJV. I will describe a person from either the Old or New Testament and you have to decide who it is. Have fun! It should be pretty simple.

Quiz Answer Key and Fun Facts
1. I was an Evangelist and Jesus' beloved disciple. I am traditionally thought to have written one gospel and three epistles in the New Testament, although modern scholars are not sure which, if any, of them I actually wrote.

I was one of Jesus' closest friends. At His crucifixion He told me to take care of Mary, His mother, and for her to love me as her son.

The Book of Revelation, written by an author named John who was in exile on the island of Patmos, is not now considered by most scholars to have been written by the same person responsible for the other writings attributed to John.
2. I was jealous of my older brother's relationship with our father. I was encouraged by my mother to trick him and stole his birthright, gaining for myself the paternal blessing that was supposed to be passed to the eldest son.

Genesis 32:24 says that Jacob wrestled with a man. But, that could mean that the angel of the Lord was in the form of a man, just like when Abraham met with the two strangers (angels) who told him that Sarah would have a baby. He later said that they were angels.

In Genesis 32:25 it says that the man touched the hollow of Jacob's thigh. The thigh was put out of joint. You cannot put a thigh out of joint just by touching it unless you have the power and strength of God. In Genesis 32:30 Jacob says he had seen God face to face.

This implies that he realized the person he wrestled with was God, or the angel of God.
3. When my husband died, I left my native country to travel with my mother-in-law to a country that was foreign to me. Here I met Boaz and married him.

Boaz and I had a son whose name was Obed. Obed's grandson was David, the future king of Israel.
4. My mother put me in a basket in the river. Pharaoh's daughter found me and raised me as her son until I had to go back to my people, the Hebrews.

I later went on to help free the Israelites from over four hundred years of Egyptian bondage. On Mt. Sinai, I walked on holy ground and saw God's back and heard his voice through the bush that was burning, but not consumed.
5. I captured Christians and sent them to their death. Later I, too, became a Christian and was one of the most zealous and well known missionaries of all time.

I was beaten, stoned, shipwrecked, and sentenced to death many times. One time I was freed from jail in the middle of the night by an angel. Little did I know that my friends were all in one house praying for me all night.
6. My brothers hated me and sold me into slavery. They told my father I was dead. Eventually I became to be the second in command of the whole nation that I had been a slave in.

I put my brothers through a test later in life to see if they had changed since they sold me into slavery. I even took one of them captive so that they would return with my youngest brother, Benjamin.
7. I listened to my enemy and gave into temptation only to be kicked out of my beautiful home.

My husband Adam and I walked and talked with God every day in the Garden of Eden.
8. I was the wisest man that ever lived. I built a beautiful palace. I was a son of David.

The Queen of Sheba traveled far just to see how wealthy I truly was.
9. I was incredibly strong. No one could defeat me until one night when I lost the battle because of my disobedience to God. I fell in love with a woman of the enemy.

When my strength did return, I was at a party, chained up so people could mock me. I pushed down the two pillars that I stood between. This caused the building to collapse killing me and the Philistines.
10. Jesus raised our brother from the dead. Jesus was our friend and stayed and fellowshipped with us often.

We lived in a small town called Bethel. Our brother is Lazarus. This is one of the few times that it is recorded that Jesus wept.
Source: Author alleycat7 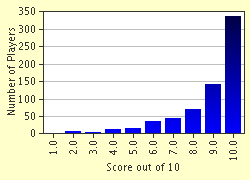 
Other Destinations
Explore Other Quizzes by alleycat7