Welcome to number 13 in this series. As always, the NIV translation has been used in compiling this quiz. Good luck and have fun!

Quiz Answer Key and Fun Facts
1. For $100, to which very small seed does Jesus liken the kingdom of Heaven in Matthew 13?

See Matthew 13:31-2. This parable seems to suggest that though the kingdom of God may start very small, it will grow to worldwide size, which is certainly what has happened with the Christian faith.

See Acts 13:1. Lucius of Cyrene is named as one of the prophets and teachers.

See Matthew 14:1-12. Herodias' mother persuaded her to ask for it.
4. For $500, according to the book of Acts, in which city were followers of Jesus first called Christians?

Acts 11:25-27. This appears to be the beginning of a recognition of Christians as a separate group. In the early days, Jesus' followers continued to attend the synagogue and worship there, although it is recorded elsewhere in Acts that they also met in private homes.

The word Christian comes from the Koine Greek word Christos, which is a translation of the Hebrew word, Messiah, which means Anointed One.
5. For $1,000, in Numbers 13, the spies who returned from Canaan compared themselves to which insect?

Numbers 13:33. In my opinion, this says more about the spies than about the Nephilim, whom they encountered. It is because the spies' opinion of themselves was so low, that they feared the people who already inhabited the land.
6. For $2,000, in Matthew 13, which type of soil is NOT mentioned in Jesus' explanation of the Parable of the Sower?

See Matthew 13:1-23. It is interesting that there is no mention of ground that has been prepared by a gardener, which you might expect.
7. For $4,000, to whose house does God send Jeremiah in Chapter 18?

Jeremiah 18. This is a beautiful picture of the restoration that God wants to do for his people of Israel. They have failed him many times, but God never gives up on them. Many Christians believe that it is also a picture of the restoration and healing that God wants to do in their own lives.
8. For $8,000, which of these is NOT one of the purposes mentioned by Isaiah in Chapter 61 for which God's messenger was sent?


Answer: to turn water into wine

Isaiah 61:1-3. This passage is quoted by Jesus early in his ministry (Luke 4:14-28), when he preaches at the synagogue in his home town of Nazareth. He says that this passage has been fulfilled that day, which causes great consternation and rejection amongst his hearers.

Turning water into wine was of course the first miracle that Jesus performed at a wedding in Cana. You can find this story in John Chapter 2.
9. For $16,000, when the Israelites left Egypt, why did God not lead them through the land of the Philistines, although it was the shortest route?


Answer: Because they might change their minds and return to Egypt

Exodus 13:17-8. God knew that if the Israelites faced war immediately after leaving Egypt, they would be tempted to return. Instead he led them by the desert road towards the Red Sea.

It is true that at least some of the Philistines were giants - Goliath, whom David later killed, was a Philistine. However, that is not given as the reason here.
10. For $32,000, according to Romans 13, which of these has fulfilled the law?


Answer: whoever loves others

See Romans 13:8. According to Paul, we can fulfill the law by loving others. As part of this, we may find ourselves helping those in need, giving all our money to the poor or even healing the sick. But love is the key, he says, and should be the motive for everything we do and say.
11. For $64,000, what was Gideon doing when the angel of the Lord first came to speak to him?


Answer: threshing wheat in a winepress

See Judges 6:11. Gideon was threshing wheat in a place where he couldn't be seen, because he was afraid of the Midianites. In the light of this, it is surprising that the angel greets him as a 'mighty warrior'. (v12)

However, as you can read in Judges chapters 6-8, God used Gideon to defeat the Midianites.
12. For $125,000, in the book of Ruth, how does her guardian-redeemer show that he is passing responsibility for her to Boaz?


Answer: By removing his sandal

See Ruth 4:8. Boaz was willing to marry Ruth, but there was a closer relative, who had first claim on her.

Verse 7 of the chapter gives an explanation of this custom: 'Now in earlier times in Israel, for the redemption and transfer of property to become final, one party took off his sandal and gave it to the other. This was the method of legalizing transactions in Israel'.

The Hebrew word for guardian-redeemer is a legal term for one who has the obligation to redeem a relative in serious difficulty (see Leviticus 25:25-55).
13. For $250,000, in Romans 15, Paul mentions a country, which he hoped to visit, although there is no evidence in the Bible that he actually did so. Which European country is this?

See Romans 15:28. In this verse, Paul talks of his plans to visit the Christians in Rome after he has visited Spain.

Since Spain was at the Western end of the Mediterranean Sea (and of the Roman Empire in the first century AD), it was considered to be at the end of the known world.
14. For $500,000, Romans 14 may appear at first glance to be about vegetarianism. But which of these best describes the true message of this passage?


Answer: Everything that does not come from faith is sin

That line comes directly from Romans 14:23. In this chapter, Paul says that people should not judge each other by what they do or don't do in terms of eating habits or observing Christian festivals. He says that God is the only one who knows people's motives and intentions and they are ultimately answerable to him, not each other.
15. For $1,000,000, in Exodus 14, what did God tell Moses to do, in order that the Red Sea would part so that the Israelites could pass over and escape the Egyptians?

Exodus 14:16. The Israelites could see the Egyptian horses and chariots following them and they were afraid. Moses told them to stand still and trust the Lord (v15), but the Lord told him to raise his staff and stretch his hand over the sea, so that the waters would part and they would be able to pass over on dry land.
Source: Author cal562301 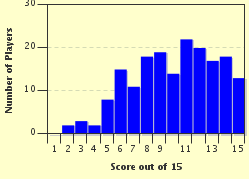