Welcome to Millionaire Style Bible Quiz #8. As always, all references are from the New International Version of the Bible. Good luck and have fun!

Quiz Answer Key and Fun Facts
1. For $100, how old was Jesus when he got lost in Jerusalem for three days, whilst visiting the Temple with his parents?

Luke 2:41-52. Jesus was amazed that his parents didn't understand his need to be in God's house, but, even so, they did not understand (v50).

The teachers in the temple were amazed at the understanding and knowledge that Jesus showed at such a young age.
2. For $200, several times in Luke Chapter 2, it is obvious that Mary, the mother of Jesus, heard and saw things that she did not understand. What does the Bible say she did about this?


Answer: treasured them in her heart

Luke 2:19, 51. In verse 19 it also says that she pondered on them in her heart. I think this is a good thing to do with things about God which we do not understand, as understanding may come later.
3. For $300, what is the first thing that God said to Adam and Eve after they had sinned by eating the fruit from the Tree of the Knowledge of Good and Evil, which God had forbidden them to do?


Answer: Where are you?

Genesis 3:9. Adam and Eve were hiding because they were ashamed of their nakedness, so presumably they were not aware of it before they committed the sin.

Although God did go on to ask them who told them that they were naked and for more information about how and why they came to eat from the forbidden tree, this was not the first thing he said to them.
4. For $500, when God first spoke to Samuel in the night when he was sleeping in the temple, who did Samuel think it was that was calling him?

1 Sasmuel 3. God called to Samuel three times and each time he thought it was Eli, the priest. Then Eli realised that it must be God who was speaking. He encouraged Samuel to respond with the words "Speak, for your servant is listening." (verse 10). Samuel did this and God gave him an important message for Eli.

Hannah, Samuel's mother, was one of several women in the Old Testament, who were initially unable to have children, which was a cultural disgrace in that society. She promised that if God gave her a son, she would dedicate him to God's service. So when she had Samuel, she took him to the temple as soon as he was weaned, so that he could serve God alongside Eli the priest. You can read this story in 1 Samuel 1 and 2.

Samuel grew up to be a very wise man and prophet.
5. For $1,000, which of these is not one of the titles given to the coming Messiah in Isaiah 9?

Isaiah 9:7. Christians believe that this passage refers to Jesus and that His kingdom has not been seen in all its fullness on earth yet, but will be seen when he returns.

Alpha and Omega is one of the names by which God calls Himself in the New Testament book of Revelation, eg, Revelation 1:8.
6. For $2,000, which two prophets appeared on the Mount of Transfiguration alongside Jesus?

Mark 9:2-13. Peter, James and John were with Jesus. Their response, typified by Peter, was to want to stay on the mount. However, the Bible says that they did not know how to respond, because they were so frightened (verse 6).

Jesus forbade the disciples from telling anyone about what had happened until after He had risen from the dead, but it is obvious that they did not understand even what that meant (verses 9-10).
7. For $4,000, in what village was the house of Mary, Martha and Lazarus, where Jesus loved to spend time?

Bethsaida is the name of a pool in Jerusalem, where Jesus healed a man who had been lying there for 38 years, waiting for someone to lower him into the water, which was said to have healing powers. You can read this story in John 5.

Bethphage is a village on the Mount of Olives, which is mentioned in Matthew 21:1.

Bethlehem, as most people know, is the town where Jesus was born.

Beth is the Biblical Hebrew word for house.

2 Samuel 9. 2 Samuel 4 tells us that Mephibosheth was lame because his nurse dropped him when they had to flee following the death of Saul and Jonathan. He was 5 years old at the time.

Because Jonathan had been such a good friend, like a brother, to David, he wanted to do good to at least one member of his household, so he took Mephibosheth into his palace and treated him like one of his own family.

Ziba was the servant of Saul, who told David about Mephibosheth.

Joab and Aber were officers in David's army.
9. For $16,000, why does the Bible say the Pharisees watched Jesus closely when a man came to him for healing on the Sabbath?


Answer: They were looking for a reason to accuse him

Mark 3:1-6. Jesus had already upset the Pharisees, because his teaching was contrary to their own.

Here they were looking for an opportunity to accuse him of breaking Jewish laws by working on the Sabbath. However, Jesus confounded them by asking: "Which is lawful on the Sabbath: to do good or to do evil, to save life or to kill?" (verse 4). The Pharisees obviously had no answer to that that they were prepared to give, so they remained silent.

After Jesus had healed the man, the passage tells us that the Pharisees started to plot with the Herodians on how they might kill Jesus (verse 8).
10. For $32,000, which of these was not one of the seven deacons chosen to serve the early church in Acts 6?

Acts 6:5. Apart from Philip and Stephen, nothing more is heard of these men in the New Testament.

Eutychus was the young man who fell out of a window whilst Paul was preaching and was restored to life by the apostle. You can read this story in Acts 20.
11. For $64,000, from which of the minor prophets in the Old Testament is this verse taken? "The LORD your God is with you, he is mighty to save. He will take great delight in you, he will quiet you with his love, he will rejoice over you with singing."

1 Timothy 6:10. This is one of the most misquoted verses in the Bible. It is most often misquoted as 'money is the root of all evil'. Money in itself is neutral in the Bible - it is neither good nor bad. It is our attitude towards it and what we do with it that counts.

This is what Paul is saying here.
13. For $250,000, what happened when the priests brought the ark of the covenant into its appointed place in the temple?


Answer: the glory of the Lord filled the temple

1 Kings 8:1-20. When the priests withdrew after placing the ark in the inner sanctuary of the temple, the glory of the Lord filled the temple, so that the priests could not fulfill their services (verses 10-11).

Sacrifices were made before the ark was brought into the temple. Verse 9 tells us that so many sheep and cattle were sacrificed that they could not be recorded or counted.
14. For $500,000, in Ezekiel 3, the prophet was given a scroll to eat. How is its taste described?

Ezekiel 3:1-15. The Lord was giving Ezekiel a hard message for his own people and God already knew they would refuse to listen. But God still gave them the chance to repent from their wickedness.

Although the scroll was as sweet as honey in Ezekiel's mouth, it says later in this passage that he went in bitterness and in the anger of his spirit, with the strong hand of the LORD upon him (verse 14).
15. For $1,000,000, who told Naaman that Elisha could heal him of his leprosy?

2 Kings 5. This slave girl was one of the most insignificant people in Naaman's household, but she had faith in God and she knew that Elisha could heal him.

The Bible shows that God can use even the most insignificant people (from a human point of view) in His purposes. 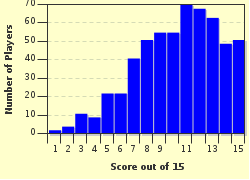