Here is number 10 in the series. As always, the NIV translation has been used in compiling this quiz. Good luck and have fun!

Quiz Answer Key and Fun Facts
1. For $100, according to John's gospel, how many baskets of leftovers were gathered up by the disciples following the feeding of the 5,000?

John 6:13. This was after everyone had had enough to eat (v12). It is obvious from this passage that most of the people followed Jesus because of the miracles He had done and for supplying their physical needs (e.g. healing and food) - see verses 2 and 26.

However, Jesus went on to tell them that He could satisfy their spiritual needs as well in verses 25-58. The response of many of His followers was to turn away from Him (60-70).
2. For $200, of whom or what was it said in Matthew 6, that 'not even Solomon in all his splendor was dressed like one of these'?


Answer: the lilies of the field

Matthew 6:29. In this passage, Jesus talked about trusting God and not worrying about what will happen in the future. He will take care of those who trust Him, He said, just as He takes care of the lilies of the field and the birds of the air.
3. For $300, when Jesus sent the twelve disciples out in Mark 6, what were they allowed to take with them?

Mark 6:6b-13. In fact, they were expressly forbidden to take the other things. It is obvious from the passage that they were expecting to receive hospitality wherever they went. Indeed, this was the custom in the ancient Near East.
4. For $500, how long, according to Luke 6, did Jesus spend praying before He chose His disciples?

Luke 6:12-15. Jesus often went up the mountain to pray to God when He had an important decision to make. He did this at night, possibly, because He was less likely to be interrupted by the disciples or the crowds, when He needed to pray in private.
5. For $1,000, according to 1 Peter, how many people were believed to have been saved from the flood by going into the ark that Noah built?

1 Peter 3:20. According to this passage (and Christian tradition), only Noah, his wife, his three sons (Ham, Shem and Japheth), and their wives were saved. However, thanks to arpeggionist for pointing out, that the account in Genesis 6 does not tell us exactly, how many were saved in a time when polygamy was common.
6. For $2,000, Isaiah had a vision in the temple in the year that which king died?

Isaiah 6:1. We know from the account of his life in 2 Chronicles that Uzziah was a good king for most of his life. But later he became proud and entered the temple to burn incense, something which only the priests were allowed to do. Because of this, he suffered from leprosy, and had to live in a separate house for the rest of his life. You can read this story in 2 Chronicles 26.
7. For $4,000, according to the book of Proverbs, which insect should the sluggard consider?

Proverbs 6:6. The dictionary definition of a sluggard is 'a slothful person; an idler'. Ants are always so busy that they could never be described as slothful or idle!
8. For $8,000, what percentage of someone's income is a tithe?

In such passages as Malachi 3:6-18, God says that his people are robbing him because they are not him the full tithe, as commanded in, for example, Leviticus 27:30-32.

The Torah, and thus Judaism, emphasize that it is the amount that matters when tithing and other financial obligations are involved. More than once the Torah commands Jews how 'the rich should not give more, nor the poor less' than the amount specified, whether it is the percentage for the tithe (in Hebrew known as the 'ma'aser' or 'tenth portion'), or the half-shekel for census purposes, or five shekels for the redemption of the firstborn. (Thanks to arpeggionist for this additional interesting information.)

The New Testament does not lay so much emphasis on tithing. In 2 Corinthians 9:7, Paul says: 'Each man should give what he has decided in his heart to give, not reluctantly or under compulsion, for God loves a cheerful giver'. The emphasis here is on the attitude of the giver's heart, rather giving out of obligation.

Many Christian churches today encourage their members to tithe their income.
9. For $16,000, in Galatians 6, what does Paul say he will boast in?


Answer: the cross of our Lord Jesus Christ

Galatians 6:11-16. Here he is arguing against the Jewish believers of the early church, who wanted to impose circumcision on all non-Jewish believers.

Paul says that it is not the outward ceremonies that are important, but rather the work of the cross in our lives, which transforms believers.
10. For $32,000, according to Hosea 6, what does God desire rather than sacrifice?

Hosea 6:6. God desires mercy. In the early verses of this chapter, God promises through His prophet that if His people repent, He will heal them and bind up their wounds.

He also says that God desires acknowledgement of Himself, rather than burnt offerings. The heart's attitudes are more important than outward signs.
11. For $64,000, in the book of Exodus, what were the names of the Hebrew midwives who were ordered by Pharaoh to kill all the male children born to the Hebrew women?

Exodus 1:15. However, these ladies were courageous and trusted God. They told Pharaoh that the Hebrew women gave birth too quickly for them to be able to attend them. Because of their courage, the Hebrew people and the ladies themselves were blessed by God.

Zipporah was Moses' wife and Miriam was his sister. Rebekah was Isaac's wife and Rachel was married to Jacob.
12. For $125,000, which of the tribes of Israel was not numbered in the census of the people?

Numbers 1:47-54. This is because the tribe were given the responsibility of caring for the Tabernacle.

For the same reason, they were not given their own area of land when the Israelites entered the promised land. Instead they were given towns in the other tribes' territories. See, for example, Numbers 35 and Deuteronomy 10:9.
13. For $250,000, how frequently were the Israelites commanded to celebrate a year of jubilee?

Leviticus 25:10. The year of jubilee was an opportunity for each family to have a reunion and hold a great celebration.

Perhaps the origins of celebrating special anniversaries, such as a Golden Wedding after 50 years, lie in this Old Testament custom.
14. For $500,000, what occupation did Amos, the Old Testament prophet, have?

Amos 1:1. Amos pronounced God's judgement on Israel and on some of her neighbours, such as Moab.

The word described in the original Hebrew as the profession of Amos is 'boker', which translates more literally as 'rancher' (in modern Hebrew it's the word for a cowboy), and not as 'shepherd'.
15. For $1,000,000, from which book does this blessing come? "The Lord bless you and keep you; the Lord make his face shine upon you and be gracious to you; the Lord turn his face toward you and give you peace."

Numbers 6:24-26. This is often known as the Aaronic blessing, because Aaron and his sons were told to use it to bless the Israelites. Today, it is often used as part of the Christian marriage service.

The Aaronic blessing, better known as the priestly benediction in Judaism, serves in Jewish rituals more than in Christian ones. In Israel, the 'Cohanim', the descendants of Aaron, recite this benediction every day in synagogue services (outside of Israel it is done only on holidays). And in that context it has served Jews for far more time than it has been popular in Christianity. (Courtesy of arpeggionist.)
Source: Author cal562301 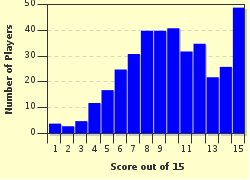