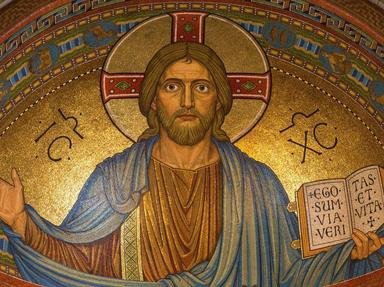 They Passed By Here Trivia Quiz

There are numerous places mentioned in the Bible. See if you can figure out some of these hidden in these puzzles.

Quiz Answer Key and Fun Facts
1. Anagrams: Rearrange the capitalized letters to form a body of water. The disciples couldn't LIE down as the GALE blew strongly.

The Sea of Galilee features many times in the Gospels in the New Testament. The clue in the question refers to the time when Jesus and His disciples were travelling by boat across the sea of Galilee. A strong storm arose and the disciples feared the boat would sink. Jesus, who was asleep, got up and rebuked the storm which immediately calmed down.
2. Fractured Words: Say the words out loud and a famous mountain should spring to mind. Seen Eye

Mount Sinai is first mentioned in the book of Exodus in the Old Testament. Moses spent forty days atop this mountain from where he received the Ten Commandments from God.
3. Add a letter: Add a letter to the synonym of the clue to form a garden. E + Lair

According to the book of Genesis, human existence began at the Garden of Eden. Adam and Eve were banished from this place of paradise when they disobeyed God and ate from the Tree of Knowledge of Good and Evil.
4. Wordwise: Say what you see and you will find a city. EVNEH

In the book of Jonah, God commands the prophet Jonah to go to Nineveh and deliver his message to the people of the city. Jonah initially tries to run away by taking a ship sailing in the opposite direction. When he finally does go to Nineveh and preach about God, the king along with all the people of the land repent for their sins and turn to God.
5. Cryptic: Solve this cryptic clue to find a Biblical mountain. Did the twisted bone found on the peak belong to Moses?

Twisted is a clue that the answer is hidden in scrambled form in the sentence. BONE = NEBO.

During the years that the Israelites were wandering in the desert, they complained about not having enough water. God commanded Moses to speak to the rock and he would make water gush out. Instead in anger, Moses struck the rock with his staff. This disobedience displeased God and Moses was not allowed to enter the Promised Land. Moses could only see the Promised Land from Mount Nebo and it is where he is believed to have died.
6. Hidden Words: Find the place hidden in the sentence below. For Elizabeth, any visit from Mary was good news.

Bethany was the home town of Jesus's close friends, Mary, Martha and Lazarus. It was here that Jesus raised Lazarus from the dead.
7. Rebus: Combine synonyms for the terms given to form a Biblical city destroyed for its evil citizens. Piece of earth + Yoga chant

Sodom is first mentioned in the book of Genesis. God informs Abraham that he intends to destroy the cities of Sodom and Gomorrah because of the vile deeds of their citizens. Though He agrees to Abraham's pleas for mercy, on not finding even ten righteous people in the place, the angels of God command Abraham's nephew, Lot and his family to leave the place before it is destroyed.
8. Missing Vowels: Fill in vowels appropriately to get the name of a place. NZRTH

Nazareth is regarded as the childhood home of Jesus. It is also considered to be the place where angel Gabriel informs Mary that she will give birth to the Messiah. The Church of the Annunciation, the largest Catholic church in the Middle East, is found at this site.
9. Hidden Words: Find the place hidden in the sentence below. Solomon relaxed as he basked in the attention from the queen.

In the book of 1 Kings, there is an account of the Queen Sheba visiting King Solomon to test for herself his intelligence after hearing many glowing tributes to his wisdom.
10. Rebus: Combine synonyms for the terms given to form a Biblical place. Second letter of the Hebrew alphabet + French article + Edge

Bethlehem is identified as the birthplace of Jesus. While Joseph and Mary lived in Nazareth, they had travelled to Bethlehem for the Census and it was while they were there that Jesus was born.
Source: Author zorba_scank 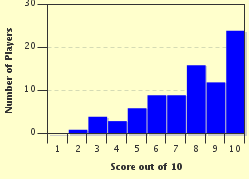 Related Quizzes
This quiz is part of series Wordplay by Category:

Some of the many wordplay quizzes I have created in different categories.