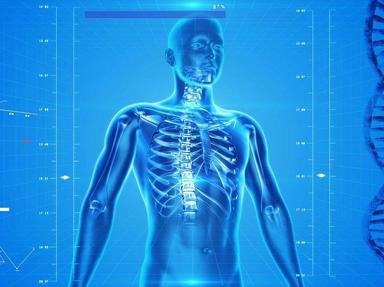 Quick! How many body parts can you think of that have three-letter names? If you can't name ten, this quiz may help.

Quiz Answer Key and Fun Facts
1. Most people have ten of these, five on each foot. What body part is it?

One of the earliest known prosthetic devices is a wooden big toe found on a mummy from approximately 1000-700 BC.
2. Anatomically speaking, this word refers to only to the area between the knee and ankle, but generally people use it to refer to the entire lower limb. Most people have two, but Long John Silver ended up with only one. What is it?

The iconic pirate Long John Silver was a character in Robert Louis Stevenson's "Treasure Island", first published as a serial in "Young Folks" magazine in 1881-1882. Any medical dictionary makes it clear that the definition for a doctor is that leg means only the lower leg.
3. Just about everyone has this joint, where the femur attaches to the pelvis, but it is more prominent in adult women because the area widens during puberty. What is this area of the body called?

A person's waist-to-hip ratio (WHR) is sometimes used as a health indicator.

While most people have two pairs of these "floating ribs", it is not uncommon for people to have only one pair or even three pairs.
5. Technically, this word only refers to the part of the anatomy between the shoulder and elbow. In common usage, the word refers to the entire upper limb down to the wrist. In television and film, Dr. Richard Kimble searched for a man with only one. What is it?

In both the 1963-1967 television series "The Fugitive," and in the 1993 film, Dr. Richard Kimble is falsely convicted of his wife's murder but escapes and searches for the real killer, a "one-armed man." In the original television show, the killer was portrayed by Bill Raisch, who lost his right arm in World War II.

In the 1993 movie, the two-armed Andreas Katsulas played the one-armed man.
6. This part of the body moves when you're eating. Unless you've broken it and it's wired shut; then you're probably eating through a straw. In any case, remember that when chasing sharks you're probably going to need a bigger boat. What body part is this question about?

The 1975 film "Jaws" is about a rogue shark terrorizing a coastal community. One memorable line from the film is: "You're gonna need a bigger boat."
7. Shhhhh! Without this body part you would be a very messy eater, have trouble talking, and be a lousy kisser. And you certainly wouldn't be able to whistle. What is this body part called?

"You know how to whistle, don't you, Steve? You just put your lips together and... blow," is a line, spoken by Lauren Bacall, from the 1944 film "To Have and Have Not." Some people incorrectly believe the quote is from "Casablanca" (1942). Both films star Humphrey Bogart as an expatriate American getting involved with the resistance movement during World War II.
8. Located in the orbital of the skull, this organ is strongly associated with vision. This colorful body part comes in blue, brown, green, hazel and other colors, but what is it?

Van Morrison's signature song "Brown Eyed Girl" was released in 1967. 40 years later, the song was inducted into the Grammy Hall of Fame in 2007.
9. Listen and you will hear that this question is about the... what?

Disney's 1941 film "Dumbo" was about a little elephant with extremely large ears that are initially a source of ridicule, until he uses them to fly. Although the other elephants talk in the film, Dumbo never speaks, and his mother's one line in the film is to name her son "Jumbo, Jr."
10. The technical term for this part of your body is the gingiva. It's the tissue surrounding the alveolar bone that holds your teeth. What is it?

Periodontology is a dental specialty that focuses on the structures around the teeth, such as the gingiva or gums.

"Bleeding Gums" Murphy was a character in early episodes of "The Simpsons" cartoon show (1989-). He explained his nickname by stating that he had never been to a dentist.
Source: Author jcpetersen 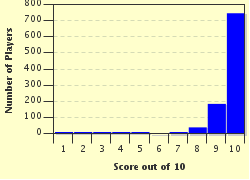 Fill in the Blank questions where each answer is just a three letter word.


Other Destinations
Explore Other Quizzes by jcpetersen