It's an ill wind that blows nobody any good - maybe. This is a quiz about some of the winds of the world, and I hope you will find it interesting.

Quiz Answer Key and Fun Facts
1. This wind blows across France from the North West. It speeds down the valleys of the Rhone and Durance and mainly affects Provence, although it is also felt as far away as Sicily and North Africa. What is its name?

The Mistral is a strong, cold wind and in Provence the trees are bent in the direction of the Mistral. Provencal farmhouses are traditionally built with their backs to the wind. The Mistral can cause damage to crops and is said to cause headaches, but it also helps to ensure the good weather for which the south of France is famous, by cleaning and drying the atmosphere.
2. This wind is hot, dry and dusty and blows southwards from the Sahara Desert to the Gulf of Guinea on the west coast of Africa, most strongly from November to March (winter). It can block out the sun for days on end and the dust it carries may spread out over the Atlantic Ocean. What is is called?

The high level of dust in the Harmattan is a health hazard and it can cause crop damage. Air services are often subject to cancellation because of the dust. In summer it may interact with the monsoon winds and cause tornadoes to form.
3. This next wind blows in Australia in the summer and mainly affects Victoria and New South Wales. It's another hot, dry wind which picks up clouds of dust. What's its name?

The wind got its name because it blows across a district of Sydney called Brickfields, where it picked up red brick dust in the early days when Sydney was being built. The wind blows from the dry, sandy interior of Australia where it is very hot, to the coast, and it can last for several days. Once this front has passed, it's almost always followed by a strong 'Southerly Buster' of cool, cloudy air from the sea.
4. This wind blows in the western regions of Canada and America, and takes its name from the native people of the area. It's another hot, dry wind and is also known as the 'Snow Eater'.

The Chinook arises where the plains and prairies meet several mountain ranges. The wind flows off the mountains' eastern slopes and is capable of melting 30cms of snow in a few hours. And it doesn't just melt, it evaporates in a process known as 'sublimation', leaving no puddles behind. Hence the name 'Snow Eater'.
The wind can cause huge changes in temperature in a matter of minutes. In 1972 in Montana, the temperature rose from -48c to +9c in a few minutes.
The Chinook can last from a few days to several weeks, and whereas in winter it can provide some welcome relief from the cold, at other times it can cause dust storms and fires, and people may suffer from headaches and sleeplessness.
5. In the days of sail, mariners took advantage of the strong westerly winds that blow in the Southern Hemisphere to make a fast passage. What is the name of these winds?

The Roaring Forties are found between 40 and 50 degrees Latitude; unlike the similar Latitudes north of the Equator, there is very little land there, and this allows the wind to pick up speed without being interrupted by landmasses.
Sailing vessels used the Roaring Forties to round the Cape of Good Hope and cross the Indian Ocean towards Australia and the East Indies. Returning home, they would continue to sail eastwards, crossing the Pacific Ocean and rounding Cape Horn to reach the Atlantic Ocean.
There are similar conditions further south in the 'Furious Fifties' and the 'Screaming (or Shrieking) Sixties.
6. In South Africa there is a famous south easterly wind that blows during the summer months from around September to March. It swirls down from False Bay to Cape Town and helps to keep the air fresh and sparkling. What's its traditional name?

The Cape Doctor is so-called because its action helps to remove pollution from the air. One of its most famous manifestations is when it picks up warm moist air from False Bay and carries it around the eastern flank of Table Mountain. The air gets pushed up the side of the mountain and as it rises clouds are formed. These clouds hang densely over the top of Table Mountain and are known - for obvious reasons if you see them - as 'the Table Cloth'.
Nowadays the wind is probably more often referred to as the 'South Easterly'.
7. There are areas both north and south of the equator where the prevailing winds are light and the weather generally hot and dry. In the days of sail, ships could often find themselves becalmed and might, in consequence, have to dispose of onboard livestock as their drinking water ran out. What name is given to these Latitudes?

The Horse Latitudes are found at around 30 degrees of Latitude both north and south of the Equator.
It is said that the name 'Horse Latitudes' arose because Spanish sailors transporting horses to the West Indies would often have to resort to throwing dead or dying horses overboard, as it became impossible to keep both them and the sailors alive as their drinking water ran out. It seems a bit unlikely that this is true as is would have meant an awful lot of waste, and so why would they choose to use this route in the first place.
An alternative explanation is that sailors on long voyages would get an advance of their pay, which they often spent all at once. Having no money left they might get a further advance form the ship's paymaster, leading them into debt. This was called 'dead horse time', (I don't know why) and by the time that the ship had reached the 30 degrees of Latitude, they might have managed to pay off the debt. This would be celebrated by making a straw effigy of a horse and throwing it overboard after parading it round the deck and a few ceremonies. Horse play? Horsing around? I have no idea of the truth.
8. This wind afflicts North Africa and the Arabian Peninsula. Its name is derived from the Arabic word for 'fifty' because it can blow intermittently for up to fifty days. It can cause electrical disturbances that render compasses useless, and there is generally nothing to do but take cover when it arrives. What is it called?

The Khamsin blows eastwards from February to June along the southern Mediterranean, and picks up dense clouds of dust as it goes. The winds can reach up to 140kph and cause swift rises of temperature, as much as 20c in a short time.
The local people take cover when they see the dust approaching, but Napoleon's troops during his Egyptian Campaign were slow to react, not knowing what was to come, and found themselves blinded and choked by the dust. The Armies fighting in the desert during WW2 had the same problems, plus the effect the dust had on their machinery.
9. This is yet another hot, dry wind, this time to be found affecting coastal Southern California and northern Baja California. It shares its name with a town in Orange County, California. What is it called?

The Santa Ana blows in autumn and winter, and can be cold or hot depending on the temperature of the areas in which it arises - the Great Basin and the upper Mojave Desert.
The hot wind can cause wildfires to spread, and the cold one can cause fog to form.
10. The final wind in this quiz is the one that blows from the Bay of Bengal and brings heavy rain to the Indian Subcontinent. What is it called?

Monsoon winds occur in West Africa as well as Asia-Australasia. They are seasonal reversing winds, and in India the winter Monsoon blows from the north east. Winter in most of India is warm and dry and the wind is also dry - temperatures can reach over 40c.
The summer Monsoon comes from the south west and carries moisture picked up from the Indian Ocean. It blows between June and September and brings the torrential rain that is essential to agriculture, but can also be extremely destructive. This is the 'Monsoon' that most people think of when the term is used.
Source: Author invinoveritas 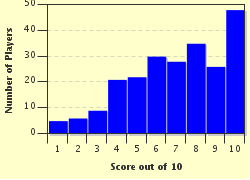 Related Quizzes
This quiz is part of series Invinoveritas invites you:

A few of my older quizzes - please remember to rate! Thank you.


1. Of Lice and Men Easier
2. An Ill Wind Blows Average
3. It's all Greek to me Easier
4. The Road More Traveled Average
5. Duck! Average


Other Destinations
Explore Other Quizzes by invinoveritas