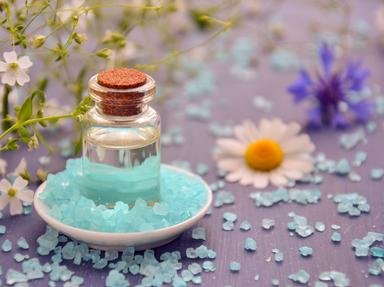 Mankind has used extracts of various flowers to treat different medical treatments since time began. Here are ten of these treatments from lovely flowers used long ago.

Quiz Answer Key and Fun Facts
1. The beautiful delphinium is very poisonous. If large amounts of this plant's extracts are taken, it can cause death. In medieval England, it was believed that the extract from this plant could protect against the sting of which deadly crawling creature in particular?

Scorpions are found in every continent of the world with the exception of the Antarctic. There are over 1,700 species of delphinium, but only 25 are believed to be deadly for humans. The delphinium, also known by the name larkspur, is usually purple in colour, but can come in other colours as well.

The English herbalist John Gerard (1545 - circa 1611) wrote in his work "Herball or General Historie of Plantes" (sic) that drinking "the seed of larkspur was thought to help against the stings of scorpions".

Although he doubted that himself, he did believe that an extract from the plant was effective in the treatment of asthma and dropsy. He also recommended its application against lice and nits.
2. The humble little dandelion has been used by mankind in many ways over time. In folk remedies in Europe, North America and China, it was once used to treat problems related to a bile-producing organ of the body. Which organ was this?

Dandelions have been around for many thousands of years in Europe and Asia. The uses to which this little plant were put, and sometimes still are, are quite amazing. These include the consumption of the leaves and buds for food, either eaten raw or cooked.

Its petals were utilised in the making of wine, tea, and coffee - caffeine free at that. It enriches the soil with nutrients, attracts insects that aid in pollinating, and even helps fruits to ripen beautifully. In China, Europe and North America, as reported in the 2006 "Journal of Ethnopharmacology," it was used in folk remedies as a diuretic, to treat inflamed muscles and joints, and to ease liver and urinary tract problems.

However, a handful of people who are overly prone to allergic reactions don't take too kindly to this plant, so it is inadvisable to try any of those folk uses now unless seeking medical advice first.

This applies to all flowers in this quiz.
3. Roses are exquisite and prized since time began for their beauty and their scents. The ancients used the plant to help ease stomach pains and problems. By the late 20th century, their properties were being investigated as a possible treatment for which serious condition?

The beautiful rose is not only lovely to look at, and a delight to the olfactory senses, it has several other uses as well. In China the Rosa Chinesis bloom was used to treat stomach problems, arthritis, wounds and ulcers. As reported by V.Matthews in an article in "The New Plantsman" Vol 1, 1994, this plant is also "being investigated as a food that is capable of reducing the incidence of cancer, and as a means of halting or reversing the growth of cancers". This can be found in the book "Plants For A Future: Edible & Useful Plants For A Healthier World" by Ken Fern, published in 1997. The ISBN number for this work is 1 85623 011 2. Hopefully, something good will emerge from this.

Roses are full of health giving vitamins. Attar of roses, an essential oil, is distilled from the rose, and used in perfumes. That is a production technique that began in ancient Persia. Rose water, another manufactured product from this plant, is used in the manufacture of various cosmetics. Then there is rose syrup which is used as an ingredient in some foods; and rose hip, which is used to make jams and jelly, and in various skin and beauty products.
4. Ancient Egyptian doctors used the seed of which plant to relieve any pain experienced by their patients?

Morphine and codeine properties are found in the seeds of poppies. These have been used for thousands of years to treat pain, and even well into the 21st century still utilised for this purpose. Unfortunately, opium can also be extracted from a certain breed of poppy.

This has been so abused over time that the beautiful, delicate flower is developing a bad reputation, so much so that I'm rather dubious about exclaiming in delight at its loveliness - in case I get arrested. There it sways then, this delicate, exquisite flower on its slender stem, waving its beautiful perfume around alluringly, a wicked floral personification of the tree of the knowledge of good and evil...and huh..wh..sorry, I got carried away! Too many poppies grow in my garden.
5. By the early 21st century, the dainty little sweet pea flower was being experimented on for its potential ability to stop a disfiguring skin condition caused by what?

This was reported in Britain's "The Guardian" in 2008. Oddly enough, the sweet pea doesn't have the actual ability to stop these contractions as such. What it does have, however, is a peculiar ingredient that leads to loose skin. It is this ability that scientists are trying to harvest for use on humans whose skin has tightened up unpleasantly following skin grafts.

The sweet pea's negative properties are therefore being harvested for positive purposes. Otherwise, it's best to avoid trying to meddle with this little flower.

It can be quite toxic.
6. The flowers snowdrops and daffodils are used today to produce a drug called Galantamine. What medical condition is the target of this drug?

The name is derived from the scientific name for the snowdrop, Galanthus. The drug is derived from an alkaloid found in the bulbs of some varieties of snowdrop and other flowers, including daffodils.

Daffodils are part of the Narcissus family. Their bulbs, which are sometimes mistaken for those belonging to onions, are poisonous. Their sap can also cause dermatitis outbreaks on the hands of florists. This is known as Daffodil Itch. However, for centuries the Japanese used the root of this plant, mixed in with a paste of flour, to treat wounds. They were also used in ancient Rome as an "emollient, erodent, (and a product) to disperse whatever had collected in any part of the body".
7. The acorus plant, which thrives near small bodies of water, was used in ancient Greece as a treatment for which ocular condition?


Answer: Inflammation of the eye

The little acorus is known by quite a few other names as well. These include sweet flag, calamus, sweet cinnamon, myrtle grass, flag root and beewort. In the ancient worlds of the Orient and Egypt, it was used for thousands of years for its sedative, diuretic, laxative and carminative properties - and as an aphrodisiac. Naughty! The uses to which it could be put gradually spread to the rest of the known world in days of yore, where, in addition to those already listed, it was found that the dried and powered root, if pushed up the nostrils, could counteract the effects of catarrh.

In medieval Britain it was strewn on the floors of medieval buildings because of its sweet perfume - and as a material to thatch the roofs of cottages. How unfortunate would it be if its effects as a laxative kicked in at the same time as its aphrodisiacal properties? Decisions, decisions.
8. By early 2012, the milky sap from the pretty allamanda flower was being investigated for its beneficial properties in which medical field?

This refers to the Allamanda cathartica in particular. This pretty flower is being investigated as a possible aid in the treatment of cancer as well as for its antibacterial qualities. It is also used in the treatment of malaria. Known also for its powerful cathartic properties ever since it's been around, the allamanda shouldn't really be mucked around with by the inexperienced gardener however.

Its sap can cause rashes, itching and painful blisters. As a decorative plant, it's quite lovely, and its different families display either white, purple, pink, yellow or orange blossoms.

In Australia, such is its prolific growth, that it has now been classed as an invasive species. Australia has never welcomed any invasive species with open arms, whether it is plant, animal - or human.
9. Now here's one very interesting little flowering for you. The amaranthus, long looked upon as a weed in several countries, is highly prized in others. It could even be a miracle plant for tomorrow. Before we get to that, however, for which medical aid did the ancient Chinese civilisations use it?

They also used amaranthus to heal infections and persistent rashes. This small plant is just amazing. It's been grown as a food grain for more than 8,000 years in some countries and gives the same amount of yield as rice or maize. The list of healthful properties it contains is quite astonishing, and includes protein, iron, manganese, phosphorus and lysine - just to name a few. And it's gluten free! Finally, after years of pooh-poohing it in the west, it began to be cultivated in earnest there during the late 20th century. The Aztecs used it for centuries as part of their staple diet until the Spaniards came along and inexplicably banned it. It is grown today in Mexico, India and other parts of Asia and the West Indies in large quantities, where it is mixed with other ingredients to give a product rich in iron - and tasty to boot. By 2012, the US was growing thousands of acres of it as a health food product as well. Because it is so easy to produce, it promises to be a possible future solution for a starving world. I'm getting carried away with enthusiasm for this amazing plant!

In China it is quite an acceptable practice to include this plant as part of the everyday diet because of the belief that it enhances eyesight. In Africa (where it grows well in drought conditions) it is beginning to be used to improve nutrition. Some doctors there are using it to improve the red blood cell count in patients as well. Several scientific studies carried out on this plant in Russia indicate that it may also be helpful for hypertension, cardiovascular disease, and cholesterol problems. And the very best quality of the amaranthus is that the plant, when cultivated and maintained, can be used as a lovely ornamental feature in gardens. I am SO going to plant some in mine!
10. The acacia flower, which is related to the wattle, grows very well in Australia and Africa. In Ethiopia, to what unusual use was this plant put?

It actually is considered somewhat of a pest in Australia because it grows so prolifically. Perhaps it wouldn't be looked on with such disdain, however, if one of its particular medical qualities was made more widely known. It's a bit hard to put this delicately, but I'll try: For years in India, this plant has been used by folk medicine specialists as an aid to stop gentlemen from ...er... ceasing their visits too quickly.

Otherwise, various parts of the plant are used in different countries as an ingredient in "soups, curries, omelettes and stir-fries", mixed in with guacamole in other countries and used as a sauce, or made into fritters and snack foods. In westernised countries, its products are used in soft drinks, root beer, energy drinks, lollies, mints and chewing gum. Some astringent medicines are also manufactured from this plant's products, as is tannin and honey.

So there you are then. Just ten of the world's beautiful plants with their health giving properties. It's sad to think, however, because of the control of the giant pharmaceutical companies on medical supplies, and the ease by which these are obtained by us all from pharmacies, that the world is fast losing its incredibly valuable knowledge of nature's own pharmaceuticals. Every home could still, before it becomes too late, have a garden filled with these beautiful, life-giving gifts from God.
Source: Author Creedy 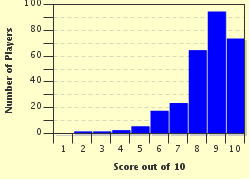