This is a quiz with a variety of questions on motherboards. Good luck!

Quiz Answer Key and Fun Facts
1. How wide is the full AT motherboard?

'A motherboard is the physical arrangement in a computer that contains the computer's basic circuitry and components. On the typical motherboard, the circuitry is imprinted or affixed to the surface of a firm planar surface and usually manufactured in a single step.' - from www.whatis.com. Usually, on a typical motherboard you could find the following parts: CPU, BIOS, serial and parallel ports, expansion slots, and controllers for keyboard, mouse, and disk drives.
2. Which company invented the ATX form factor?

'The form factor of the motherboard describes its general shape, what sorts of cases and power supplies it can use, and its physical organization.' - from www.pcguide.com. ATX form factor was invented in 1995 by Intel and by 1998 was the most popular choice in the new systems.
3. What is one of the differences between AT and ATX form factors?

The other differences between AT and ATX are that in ATX there is an integrated PS2 mouse connector, better power supply connector, 3.3V power support, and better air flow.
4. How many wires do the serial cables have?

It is true even if they have 25-pin connectors. The cable is used for transmitting information to the different computer components. For example, a serial cable is sometimes used to connect a mouse.
5. How many wires do the parallel cables have?

Hard drives are installed separately and are not a part of the motherboard.
7. Which of the following chipsets would not be found on a motherboard?

The keyboard contoller is responsible to for the work of the keyboard and integrated PS2 mouse. According to www.pcguide.com, 'Super IO' chip manages input and output from the serial port, parallel port, floppy disks, and in some cases, the IDE hard disks as well.
8. Which of the following is not a type of a second level (secondary) cache?

10. Abit first made a jumperless motherboard.

'Jumper is a metal bridge that closes an electrical circuit. Typically, a jumper consists of a plastic plug that fits over a pair of protruding pins. Jumpers are sometimes used to configure expansion boards. By placing a jumper plug over a different set of pins, you can change a board's parameters.' - from www.webopedia.com
Source: Author Lanire 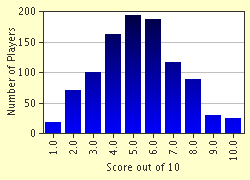 
Other Destinations
Explore Other Quizzes by Lanire