The hard drive is a critical component in a computer system. This is a quiz on some hard drive trivia. Good luck and enjoy!

Quiz Answer Key and Fun Facts
1. The first hard disks, created in the 1950s, could be up to 20 inches in diameter. Which company invented the hard disk?

The first commercial hard disks were used on an IBM 305 RAMAC. These original drives were large and usually mounted in a stand-alone rack with special power and cooling. Through the years the physical size of the drives has decreased, but the capacity has continued to grow.
2. When purchasing a hard disk which of these is generally NOT a specification that would be of concern?

The mounting holes on hard disks are fairly standard. In some cases, where a manufacturer has equipped the drive with non-standard mounting holes, a special mounting bracket is also included.

The data rate is measured by the speed in which the data is delivered to the CPU. The seek time refers to the amount of time it takes to begin delivering data to the CPU once a request has been received. The capacity defines how much data the drive with hold.
3. Inside the hard disk drive, where is the data actually stored?

Hard disks generally have a tower of platters mounted on a spindle. The platter is the "hard" surface that gave the hard disk its name, as opposed to "floppy" disks. The platter spin speed is measured in revolutions per minute or rpm.
4. When a user formats a disk, they are generally performing a high-level format which prepares the drive to hold data. When a low-level format is performed, how does it divide the platter?

The sectors and tracks provide the map for the drive and how the data will be stored and retrieved. The tracks are created in concentric circles from the outer to inner data area. The sectors divide the tracks into pie-shaped areas.

The high-level format usually organizes the disk so that the OS (operating system) knows where to find data. The OS format is different for each, such as MS Windows, Linux, etc.
5. Which of these is disk interfaces was the precursor to SCSI (Small Computer System Interface)?

The SASI for Shugart Associates System Interfaces was developed around 1978 by pioneer Larry Boucher. The name was changed to SCSI (pronounced "scuzzy") during a meeting of the ANSI (American National Standards Institute) because a standard could not reference a company name.
6. Hard drive failure rates are measured with MTBF (Mean Time Between Failures). Which of these failures would be reason to replace your current hard disk?

A head crash refers to a hardware failure where the head (the read/write mechanism) actually falls onto the platter. This could be caused by mechanical failure, or perhaps an accidental bump to the case where the hard drive is installed. The head landing on the platter can scratch the surface, obliterating the data stored there, and worse, the scratch could loosen particles which further damage the platter.

If the lost data is critical, there are companies that will work on a recovery of your data. The amount of data restored will vary depending on the damage incurred.
7. An external hard disk is often purchased by the home computer user for backups of the main hard disk (generally installed internally to the computer case). Which of these interfaces is commonly used for this purpose?

USB (Universal Serial Bus) is an industry standard and can be used for many computer devices such as external hard disk, keyboard, mouse, etc. These come with varying cable connectors such as Type A, Type B, Mini-B, Micro-A, Micro-B. Since each cable connector only fits one type of host receptacle, the user must be well informed when selecting a cable to connect their device (luckily, most new devices come with the appropriate cable!).
8. Which of these refers to the hard drive circuit board?

The PCB (Printed Circuit Board) is a piece of woven green glass and copper. Some of the electronic components installed on the PCB generally include a memory chip which the hard disk uses to cache information, and a flash chip which stores the hard disk firmware.
9. During the life of a disk, is it true that defragmentation of the file system can significantly improve performance?

When a disk is first formatted, data is written from the inner portions toward the outside or vice versa. At first all data is contiguous and quick to find. However, over time the data becomes fragmented throughout the disk.

De-fragmenting a hard disk repositions the data so that it possible that ABDE becomes ABCD, CFG becomes EFG, EHIJKL becomes HIJKLM, etc. The actual algorithm is not the same for all defragmentation programs, this is just presented conceptually.
10. Which of these is NOT known as one of the world's hard disk manufacturers?

The manufacturing of hard disks has been a brisk, competitive market. Many manufacturers have focused on other product lines (BASF, Hewlett-Packard, etc.) , many have gone bankrupt (Atasi Corporation, Syquest, etc.), and some have been acquired by others (Fujitsu, Maxtor, etc.)
Source: Author mlcmlc 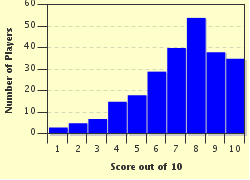 Related Quizzes
This quiz is part of series Sprint:

Quizzes by leith90 and mlcmlc for the first FT sprint (2012)


1. Take Your Mark... Average
2. Hard Drive Basics Average
3. You Can't Handle The Truth! Average
4. In the Beginning... Average
5. He Abandoned Ship and All Hope Average
6. Put Some Steak on There Average
7. Remembering the 1920s (US) Average
8. Norman Rockwell Portrait Average
9. Run Amok Easier
10. The Tale of Cheerios Easier
11. Personalize This! Average
12. Which Direction? (Musically) Easier