All numbers are coming to the costume party tonight, but they are in disguise! Now it's your task to find out their real identities.

The number one is written as "1" in both decimal and binary numeral systems. Take any number, multiply it with 1, you will get the original number. So 1 is the multiplicative identity. "Lonesome Number One" is a popular song by Roy Orbison.
3. You see another number is dancing happily on the stage. She is wearing a colorful rainbow suit. You are informed that she is a prime number. She is a good friend with the number 111 because she is written as 111 in the binary numeral system. Now, can you tell me which one-digit number is this lady?

7 is the fourth prime number, after 2, 3 and 5. It is interesting to note that in the English language, among the number 1 until 10, 7 is the only two-syllable word integer.
4. You meet with another number. This time, this number is wearing a vampire costume. He is a palindromic number. He is left alone by all other numbers because they think that he is demonic. However, what the other numbers do not know about him is that he is the 36th triangular number! Which number is this gentleman?

Notice that 1 + 2 + 3 + ... + 36 = 666. Therefore, 666 is a triangular number. 666 is also known as the Number of the Beast.
5. A lady in a shining gold costume seems to be complaining almost everything about the party. She says that the lighting is not bright enough and the food is not delicious. Well, you cannot blame her. After all, she is one of those perfect numbers! You know that the number 6 is the smallest perfect number. However, this lady is a two-digit number. To help you out, she only likes February. What number is she?

The first few perfect numbers are 6, 28, 496 and 8128.
6. It is always nice to meet a friend from a foreign country. You can't help noticing an old man who is eating his bowl of rice with chopsticks. He is from China. In China, he is considered to be a lucky number. He is also one of those Fibonacci numbers. Moreover, he is an even number. Some people say that he is actually number 0 in disguise because he is wearing a belt, but he explains that he is really not number 0. What number is he?

The number 8 is pronounced as "ba" in Mandarin, which rhymes with the word "fa", which means prosperity.
7. You find a loner in the party. He is wearing an outfit of an Easter Bunny with a basket of eggs in his hand. He seems to be very sad and sobbing in the corner. You approach him to find out the reason. Well, he says that he is caught in the middle, because he is neither positive nor negative. What number would he be?

0 is neither positive nor negative. However, 0 is an even number.
8. On the way to the toilet, you meet another guy. He seems to be pretty upset. He says that everyone is staying away from him as far as possible, but he does not know the reason. Maybe you can help him. He describes himself as a 2-digit odd number. He is also a prime number. He also informs you that he appears on a famous painting of Leonardo da Vinci, The Last Supper. You notice that he is wearing a calender outfit with the word "Friday" on it. Maybe that's the reason everyone is so scared to be with him. Now, have you figured out what number is he?

In many western countries, 13 is considered to be an unlucky number. Triskaidekaphobia is the term used for the fear of this number. There are 13 people (12 apostles and Jesus) in The Last Supper.
9. In another corner, the crowd is getting excited because the most beautiful number competition will begin soon. However, they need a judge. A gentleman comes to the front and says he will judge the competition since he is a square number. Well, he will judge the competition fair and square. His costume is of the letter "C". He is the smallest 3-digit square number. What number is he?

In the Roman numeral system, 100 is represented by the letter "C". In addition, 100 can be expressed as the sum of four consecutive cubes, namely 1^3 + 2^3 + 3^3 + 4^3 = 1 + 8 + 27 + 64 = 100.
10. The party is about to end. A man comes and greets you. You see his hand is holding a trident and you know he dresses up as Poseidon. He introduces himself as number 3. He seems to be very nice and polite. You two shake hands and you introduce yourself as the smallest number with exactly 7 divisors. You are also a square number and a cube number. Number 3 looks confused and cannot figure out what number you are. You give him another clue. You are a number between 50 and 100. Now, which number am I?

The party is over now. I, number 64 would like to thank you for your help with figuring out these numbers. Have a nice day!
Source: Author Matthew_07 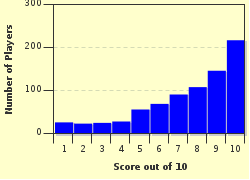 Related Quizzes
This quiz is part of series Guess the Numbers:

Guess the numbers (positive integers) based on the clues and descriptions given.