This quiz is about the amazing and interesting world of biology! I hope you enjoy it!

The retina is a light-sensitive tissue located in the inner eye that can detect light. When light strikes the retina, chemical and electrical events occur which trigger nerve impulses. These nerve impulses are sent through the optic nerve to the brain.
2. Neurones carry nerve impulses around the human body. What are the gaps between these neurones called?

The gaps between neurones are called synapses. When nerve impulses reach the end of a neurone, a substance called a neurotransmitter is fired from one neurone to the next. This is how nerve impulses can be transported all over the body.
3. Plants may respond to changes in the environment. These responses are referred to as a tropism. If a plant bends towards the light, which type of tropism is the plant demonstrating?

Gametes are sex cells formed by cell division. They are all genetically different as the pairs of chromosomes may switch places with each other during cell division, and the way the chromosomes are arranged during the second meiotic division is random.
5. Which of the following statements is NOT true about fungi in general?


Answer: Their cells have a cellulose cell wall

Fungi have a chitin cell wall and plants have a cellulose cell wall. Some examples of fungi include mold, yeast and mushrooms.
6. Which of the following terms describes the emission of light by a living organism?

Bioluminescence does not produce much thermal radiation. Many organisms have this ability, including the bobtail squid and the glowing firefly.
7. What is entomology the study of?

Entomology is a branch of arthropodology, which is specifically the study of an invertebrate animal with an exoskeleton, a segmented body and jointed body parts.
8. The Djungarian hamster is a species of dwarf hamster found in Siberia. It has the binomial name Phodopus sungorus. It is an air-breathing vertebrate animal and is a mammal. Which part of the hierarchy of biological classification will classify the Djungarian hamster as a mammal?

The cytoskeleton is the structure of the cell. The cytosol is also called the cytoplasmic matrix and is the liquid inside cells, and the lysosomes contain enzymes which break down the waste products of the cell.
10. Pasteurization is named after which famous French chemist and microbiologist?

Pasteurization is when you heat a substance to a specific temperature and then cool it down immediately afterwards. This increases the life of the substance as it prevents microbial growth.
Source: Author ThisGlows 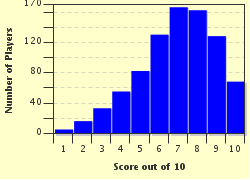 
Other Destinations
Explore Other Quizzes by ThisGlows