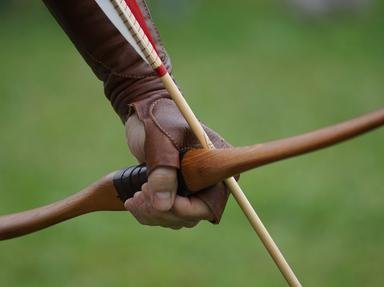 The Ultimate Archery Quiz | Sports Other

For all you archers out there, this is your quiz.

Quiz Answer Key and Fun Facts
1. How long ago have people been using a bow and arrow (according to historians)?

Historians suggest that people were using as far back as 25,000 years ago, when it was used mainly as a weapon of war. But, now is primarily used for hunting and target shooting.
2. What year did archery first appear in the Olympics?

Archery returned in the 1972 Munich Olympics.
4. How fast can competitors fire arrows?

Competitors can pull back their bows and fire arrows 200+ mph at their targets that are 70 meters away.
5. How many points is the bullseye worth?

The round targets each contain 10 circles. At ten points, the center zone or bullseye is worth ten points.
6. How many ends does an archers shoot in a round?

Archers shoot six arrows in each end of each round.
8. How many archery events are there in the Olympics?

There are 4 events, individual events for women and men, and team events for men and women.
9. What year did the modern Olympics begin?

Archery was included in the 2nd Olympics.
10. How did the legend archer, Robin Hood win an archery contest?


Answer: splitting the arrow of a competitor

This quiz was reviewed by FunTrivia editor Nightmare before going online.
Any errors found in FunTrivia content are routinely corrected through our feedback system.
Most Recent Scores
Jan 22 2023 : ozzz2002: 6/10
Dec 07 2022 : Guest 165: 7/10 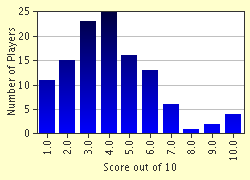 
Other Destinations
Explore Other Quizzes by dragonrider27