The Braves were the first MLB franchise to win the World Series in three different cities. How much do you know about the Braves' history and their first three world championship teams?

The Braves franchise began in Boston in 1871 as the Boston Red Stockings. They changed names in 1883 (Beaneaters), 1907 (Doves), and 1911 (Rustlers). In 1912 they finally chose the name Braves, just two years before winning their first World Series.

The 1957 Milwaukee Braves won the World Series with one of the greatest home run hitting duos in baseball history in Henry Aaron and Ed Mathews, along with with one of MLB's winningest left-handers of all time in Warren Spahn. In 1995, again with an outstanding pitching staff, the Braves brought Atlanta its first ever major professional world championship.
2. In last place on July 4, 1914, the Boston Braves steamrolled the National League for the rest of the season, taking the National League title by 10 games over the New York Giants. They then went on to win the World Championship in the first complete World Series sweep in major-league baseball. What nickname, also applied to another National League team 55 years later, did the 1914 Braves become known by?

Even after their ride from last place to first, the Braves were still big underdogs against Connie Mack's Philadelphia A's in the Series. In 1969 the New York Mets, also referred to as "the Amazin' Mets," won the World Series over the Baltimore Orioles, thus earning the nickname, "the Miracle Mets." In the 1960s, the San Francisco Giants were often called "the Bay Bombers" with sluggers like Willie Mays, Orlando Cepeda, and Willie McCovey.

The Bay Bombers was also a roller derby team in San Francisco. Back Bay is an area in Boston, but the Braves were never called "the Back Bay Bombers." The Cincinnati Reds of the early 70s, winners of two World Series, were known as "the Big Red Machine."
3. Who were two Hall of Famers on the 1914 Braves team (although one of them was better known as a Chicago Cub)?

Evers was the second sacker on the Tinker to Evers to Chance Chicago Cubs double play combo made famous in the 1910 poem by Franklin Pierce Adams called "Baseball's Sad Lexicon." The trio went into the Hall of Fame in 1946. But in 1914 Evers played with the Braves. Maranville, only 5'5", played for 23 seasons, a record that stood until 1986, when Pete Rose retired after playing his 24th season in the major leagues.

He entered the Hall in 1954. Ruth and Gehrig both played for the Yankees and were inducted in 1936 and 1939, respectively.

The Waners played most of their seasons with the Pirates. Paul, called "Big Poison," was inducted in 1952, and Lloyd, called "Little Poison," was inducted in 1967. Both also spent a year with the Boston Braves in 1941. Wilson was a Cubs Hall of Famer, class of 1979, while Nichols played with the Boston Beaneaters, later becoming the Braves, from 1890-1901 and entered the Hall in 1949.
4. From Boston the Braves moved to Milwaukee. In what time span did the Milwaukee Braves play in Wisconsin?

The Milwaukee Braves opened their inaugural 1953 season with a 2-0 win at Cincinnati on April 13 and then won their home opener the next day, 3-2, over the Cardinals. They went 19-8 in May and 23-9 in August, finishing the season at 92-62, in second place, 13 games behind the Brooklyn Dodgers.
5. Whom did the Braves beat in the 1957 World Series?

The Yanks had a loaded line-up featuring sluggers like Mickey Mantle, Yogi Berra, Elston Howard, and Bill "Moose" Skowron, along with the pitching talents of Whitey Ford and Don Larsen, who'd pitched a perfect game just one year earlier, in the 1956 Series.
6. Who was the Most Valuable Player of the 1957 World Series?

The New York Yankees had no answer for the Braves' big right-hander, who went 3-0 on the mound, winning Game 7 with only two days' rest after winning Game 5. After pitching a complete game in the Braves' 4-2 victory in Game 2, on Thursday, October 3, Burdette then shut the Yanks out in Game 5, 1-0, on Monday, the 7th, although the Bronx Bombers out-hit the Braves, 7-6. On Thursday, the 10th, Burdette then repeated his Game 5 performance, once again shutting the Yanks out while scattering 7 hits in a 5-0 Braves victory for the world championship.
7. Which Hall of Fame infielder, traded from the Giants to the Braves in 1957, may have been the key ingredient which propelled Milwaukee to world series appearances in 1957 and 1958? Most associated with the Cardinals, he was part of five World Series winners, all of which won their championships in seven games.

His late August performance earned him the nickname "Hurricane," after a storm that hit his native South Carolina in 1954 named Hurricane Hazel.

He ended the season hitting .403 in 41 games for the Braves. Famous for hitting "the Shot Heard 'Round the World" to beat the Dodgers and put the Giants into the 1951 Series, Thomson was traded to the Braves in 1954, but was then traded by Milwaukee back to the Giants on June 15 of '57 for Schoendienst. Mathews, a Hall of Famer and twelve-time All-Star, played with the Braves from 1952 to 1966, the Braves' first year in Atlanta.


Answer: There were no playoffs.

Due to a MLB players' strike, the 1994 season ended on August 11. At that time the Expos were in first place in the Eastern Division, 6 games ahead of the Braves. Both teams had played 114 games, leaving 48 games unplayed. Thus Atlanta is credited with winning 14 consecutive Divisional titles in the 15 seasons from 1991 to 2005.
9. What team, which led the American League in batting average, runs scored, home runs, and stolen bases, did the Braves beat in six games to win the 1995 World Series?

In a close series, despite not going the full seven games, five of the six were decided by a single run, with the sixth going to the Braves in Atlanta, 1-0, on a combined one-hitter by Tom Glavine and Mark Wohlers. The Braves also won Game 1, 3-2, and Game 2, 4-3.

Maddux was the first pitcher to win four consecutive Cy Young Awards, winning three with the Braves. In those four years his ERA was 1.98. As of 2014, in addition to winning a record 18 Gold Gloves, he was the only pitcher to ever win 15 games in 17 seasons. Glavine also won two Cy Young Awards. Glavine won 20 games five times. Maddux was named on 97% of HOF ballots, while Glavine was named on almost 92%.
Source: Author shvdotr 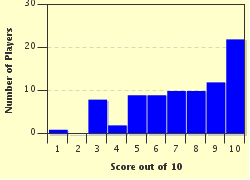