Here are some of my favorite players, plus some other interesting characters from MLB history. See if you can identify the players and the teams they played for.

Quiz Answer Key and Fun Facts
1. What two brothers were outstanding hurlers for the St. Louis Cardinals' "Gas House Gang" of the Thirties?

In 1934, Jay "Dizzy" Dean won 30 games and Paul "Daffy" Dean won 19 to lead the Cardinals to the World Series against the Detroit Tigers. Each brother won a pair of Series games to beat the Tigers 4 games to 1. None of the other brother choices were in the major leagues before 1964.
2. The first pair of teammates elected to the Baseball Hall of Fame the same year gained the honor in 1974. Who were they?

Mantle and Ford played 16 years together for the Yankees. Neither played for another team. Mantle played from 1951 to 1968, while Ford played from 1953 to 1967. Spahn was inducted in 1973, while Aaron got into the Hall in 1982. The Reds' Bench was inducted in 1989. Rose was banned from baseball for betting on baseball and was ineligible for inclusion into the Hall of Fame. Joe and Dom DiMaggio were never teammates, as Joe played his entire career for the Yankees and Dom played for the Red Sox. Joe joined the Hall of Fame in 1955, whereas Dom has not yet been elected to the Hall of Fame.
3. "Spahn and Sain and two days of rain." Fans of which East Coast team hoped this refrain would bring them into the World Series in 1948?

The Braves did make it into the Fall Classic, but despite both Spahn and Sain winning a game each, the Bravos fell in a six game series to the Cleveland Indians.
4. "Tinkers to Evers to Chance" was a famous double-play combination in the first decade of the Twentieth Century. Which team featured this trio ("fleeter than birds") whose name was the "saddest of possible words" in the 1910 poem by Franklin Pierce Adams?

Tommie Aaron hit 13 round-trippers, so he and Henry together hit 768. They were Braves teammates from 1962 to 1971. Paul Waner was an outstanding hitter for average, but he only stroked 113 home runs which, added to Lloyd's 27, make only 140. The Waners played together mostly for the Pirates.

The three DiMaggio brothers were never teammates, so don't meet the question's criteria, but hit 361 (Joe), 125 (Vince), and 87 (Dom) homers for a total of 573. Canseco and McGwire were not related, but were known as the "Bash Brothers" as Oakland A's teammates from 1986 to 1992. Canseco hit 462 career homers, while McGwire hit 583.
6. Which diminutive duo (both listed at 5'9") made up the keystone combination of the 1959 American League champion Chicago White Sox?

The '54 Series is famous for "the Catch" made by Mays off the bat of the Indians' Vic Wertz. Irvin and Mueller both had a good view of the now famous play. Smith and Doby saw it from the dugout as members of the Indians, who had won 111 games that season, but were upset in the Series by the Giants.
8. On September 15, 1963, Felipe Alou played all three outfield positions in a game for Giants' manager Al Dark. Who finished the game in the other two outfield spots as late replacements?

The Alou brothers played together in the outfield eight times in 1963 for the San Francisco Giants, but never started a game together. Felipe was a regular for the Giants, and Matty's role was primarily as defensive replacement or pinch hitter. Jesus Alou, the youngest of the three, was just called up in September.

In 1964 Felipe was traded to the Braves, and the brotherly trio were never on the same team again.
9. Which two former Baltimore Oriole teammates, who helped the O's win the World Series in 1966 and 1970, appeared in a 1980 Miller Lite commercial, in which they claimed NOT to be "identical twins"?

Frank, whose nickname was "Pencils," was Rookie of the Year for Cincinnati in 1956 and won the Triple Crown in his first season as an Oriole in '66. He also managed the Orioles from '86-'91 after becoming the first MLB black manager in 1975 with the Indians.

He joined the Hall of Fame in 1982. Brooks, perhaps the best fielding third baseman ever, won 16 Gold Gloves and played his entire career with the Orioles. He was inducted into the Hall of Fame in 1983.
10. "Murderers' Row" brings to mind the 1927 Yankees of Babe Ruth, Lou Gehrig, Earle Combs, and Tony Lazzeri. But who were two members of the ORIGINAL "Murderers' Row" of the 1918 Yankees?

Knowing that Gehrig began his 2,130 consecutive game streak by replacing Pipp in the Yankee line-up is a clue to the correct answer. Pipp actually led the American League in home runs in both 1916 (12) and 1917 (9). Much later, he was one of the first writers for "Sports Illustrated." Baker gained most of his fame with the Athletics.

He was elected to the Hall of Fame in 1955. The other four members of the 1918 Murderers' Row were Frank Gilhooley, Roger Peckinpaugh, Del Pratt, and Ping Bodie.
Source: Author shvdotr 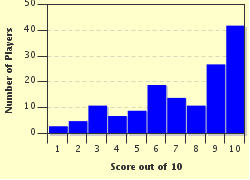