How 'Bout Them Yankees? Trivia Quiz

This quiz is about the history the New York Yankees baseball franchise.

Quiz Answer Key and Fun Facts
1. The New York Yankees organization began as the Baltimore Orioles in 1901. In 1903 the team moved to New York and took a new name. What was the new name that the team took in 1903?

The Orioles home stadium, Oriole Park, was located in Baltimore Maryland. The Orioles played two seasons in Baltimore before relocating to Manhattan, New York. With their new location, the team also took up a new name, the New York Highlanders. They took the name Highlanders because of the teams new elevated location and the Gordon Highlanders, a British Military unit.

The Highlanders played their home games at Hilltop Park.
2. In 1913, the franchise relocated to a new stadium. Along with the move, they changed their name to the New York Yankees. What was Yankees new home stadium in 1913?

In April of 1911, the Polo Grounds burned down. The Polo Grounds was rebuilt in June of 1911. The Yankees played there until 1923 when they moved into the newly built Yankee Stadium, and won the World Series in its first season.
3. On December 26, 1919, Babe Ruth was purchased by the Yankees for a large sum of money. What team did the Yankees buy Ruth from?

After the conclusion of the 1919 season, Babe Ruth demanded a pay raise. The Red Sox's owner at the time, Harry Frazee, refused to pay Ruth the salary he wanted. Frazee decided to trade Ruth, but was limited to trading Ruth to either the Chicago White Sox or the New York Yankees.

The White Sox offered Joe Jackson and a sum of money. The Yankees owners, Jacob Ruppert and Tillinghast L'Hommedieu Huston offered just money. Frazee accepted the Yankees' offer, and Babe Ruth became a New York Yankee.
4. The 1927 New York Yankees were a great team. They finished the regular season with a record of 110-44 and went on to win the World Series. What nickname was collectively given to the first six batters of the Yankees lineup in 1927?

The Yankees made their way to the 1927 World Series, where they swept the Pittsburgh Pirates in four games. This was the Yankees second World Series victory, their first came in 1923. The 1927 season was also when Babe Ruth hit 60 home runs in one season, a feat that would not be outdone until 34 years later when Roger Maris hit 61 home runs in a single season.
5. During the 1941 season, a Yankee player, Joe DiMaggio, broke the consecutive game hitting streak. How many consecutive games in a row did DiMaggio garner a hit in?

The hitting streak began on May 15, 1941, when DiMaggio hit a base hit off Eddie Smith. Smith at the time played for the Chicago White Sox. DiMaggio went 1-4 during the game. DiMaggio's 56th hit came on July 16, 1941, when the Yankees played the Cleveland Indians. That game DiMaggio went 3-4, with two singles and a double. On July 17, 1941, the amazing streak came to a close against the Cleveland Indians.

The Indians' pitchers, Jim Bagby and Al Smith, held him hitless, ending the streak at 56 games.
6. Casey Stengel was a very successful manager for the New York Yankees. How many World Series titles did the Yankees win while Stengel was manager?

In 1970, Stengel's number 37 was retired by the New York Yankees organization.
7. The most home runs hit in a season before 1961 was 60. Throughout the 1961 season, two Yankees in the names of Mickey Mantle and Roger Maris, hit a large amount of home runs. However, only one surpassed 60. Maris ended up with breaking the season home run record, with a total of 61 home runs.

Roger Maris hit the record breaking 61st home run off Tracy Stallard, who at the time pitched for the Boston Red Sox. Babe Ruth had held the home run record for 34 years until Maris broke the record. During the season, Mickey Mantle was diagnosed with a severe hip infection.

This infection caused him to sit out until fully healthy. Mantle finished the season with 54 home runs. Maris won the AL MVP for the 1961 season. The Yankees also won the World Series in 1961, beating the Cincinnati Reds in five games.
8. What New York Yankee died in a plane crash early in August of 1979?

Thurman Munson began his career with the Yankees in 1969. Before the 1976 season he was promoted to team captain. He was the first catcher to be captain of the New York Yankees. During the 1979 baseball season, Munson became homesick and began to take flying lessons. On August 2, 1979, Munson was practicing take-offs and landings.

When he was attempting to land for the third time, he sunk too low and clipped a tree stump. The plane caught fire, killing him in the process. Munson was 32 years old.

The Yankees flew out to Canton, Ohio, where Munson's funeral was. They attended the funeral even though they had a game the same day. The Yankees made it back in time to play the Baltimore Orioles. They ended up winning 5-4.
9. New York Yankees pitcher David Wells did something very unique when the Yankees played the Minnesota Twins on May 17, 1998. What did Wells do that was so significant?


Answer: He pitched a perfect game

David Wells' perfect game took place in Yankee Stadium on May 17, 1998. Before a crowd of over 41,000 fans, Wells threw a perfect game. Wells, a left handed pitcher threw 120 pitches and struck out 11 batters. The Yankees defeated the Twins 4-0. Jorge Posada was the Yankee who caught the perfect game. Ted Barrett was the head umpire during the game. Just a few months later, another Yankee, David Cone, would throw another perfect game.
10. Who did the New York Yankees defeat to win the 2009 World Series?

The New York Yankees finished the regular season with a record of 103-59. They beat the Minnesota Twins and the Los Angeles Angels in the ALDS and ALCS, respectively. The Yankees were pitted against the Philadelphia Phillies in the World Series. The Yankees had homefield advantage, since the American League won the All-Star game.

The Yankees won the sixth game by a margin of 7-3. This was the New York Yankees 27th World Series title. Hideki Matsui was named the MVP of the 2009 World Series.
Source: Author ThurstAsh 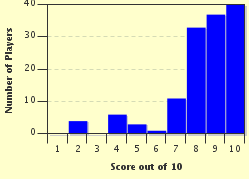 
Other Destinations
Explore Other Quizzes by ThurstAsh