All multiple choice in a series of decade quizzes. This is about Major League Baseball in the 1980s. I hope that you have fun with it. :)

Quiz Answer Key and Fun Facts
1. Which team brought in the decade with their first World Series title in 1980?

The Phillies, led by the bat of third baseman Mike Schmidt and the arm of pitcher Steve Carlton who won two World Series games, defeated the Royals four games to two. Schmidt was the series MVP for his eight hits, seven RBIs, .381 average, and his two home runs.
2. Which player won three season MVP awards in the 1980s?

The others did not take a MVP Award in the 1980s. Mike helped the Phillies win their first World Series crown in 1980, and also won the NL MVP Award. He won his second MVP in 1981, then his third in 1986. He won his MVPs over Gary Carter, Andre Dawson, and Glenn Davis, respectively. Mike was inducted into the Hall of Fame in his first year of eligibility in 1995 after retiring in 1989.
3. Which of the following teams made their first World Series appearance in the decade?

The other teams did not exist yet in the 1980s. The Padres' franchise began in 1969 in the National League. The team made their first playoff appearance in 1984, defeating the Chicago Cubs three games to two in the NLCS. They lost the World Series to the Detroit Tigers four games to one. The Padres were led by the bat of Tony Gwynn, and the pitching arm of Eric Show.
4. The Manager of the Year Award began in 1983. Who won this first award in the American League in 1983?

While Tommy Lasorda of the Dodgers took the first National League Award, LaRussa won his with the Chicago White Sox. Tony took the White Sox to a 99-63 record, and met the Orioles in the ALCS, but lost three games to one. He would go on to win the Manager of the Year Award with the 1988 Athletics, 1992 Athletics, and the 2002 St. Louis Cardinals.

In 2009, he was still at the helm with the Cardinals.
5. In the decade of the 1980s, two players tied for the most home runs hit in a season. One was Andre Dawson of the Cubs with 49. Which rookie player also hit 49 home runs in a season?

The others never hit more than 40 home runs in a season. McGwire was a rookie with the Oakland Athletics in 1987. He not only smacked 49 home runs setting a rookie record, but he also led the American League in slugging percentage with .618. This was the second consecutive season that an Athletic had won the Rookie of the Year Award, with Jose Canseco winning it in 1986. McGwire would go on to break Roger Maris' single season home run record of 61, when he clouted 70 in 1998, then followed that up with another 65 in 1999.
6. Which player had the most stolen bases in a season in the 1980s?

Rickey was with the Oakland Athletics in the 1982 season. He set a new season record by stealing 130 bases, and retired with 1406 in his career. Henderson stole 838 in the 1980s. The others listed were out of baseball before the 1980 season began.
7. In 1980, the New York Yankees, baseball fans, and Major League Baseball lost this catcher who died at the age of 51. Who was he?

Howard was well over six feet tall, very tall for a catcher, and joined the Yankees as a rookie in 1955. In 1967, he found himself in a Red Sox uniform. Elston was the American League MVP in 1963, and won two Gold Glove awards behind the plate. He went to 10 World Series in the pinstripes while winning four. Howard also had five World Series home runs to his credit.
8. Only one pitcher lost 20 games in a season in the 1980s. Which pitcher was it?

Brian was in his second big league season with the Oakland Athletics in 1980, and he went a dismal 8-20 in the season. After five seasons in Major League Baseball, he was gone in 1983. His career record was 23-45, and he was a starting pitcher.
9. Which of the following teams did not win a World Series title in the 1980s?

The Yankees appeared in only one World Series in the decade, in 1981 with a four games to one loss against the Dodgers. The Dodgers won two World Series in the decade, winning in 1981 and 1988. The Orioles defeated the Phillies in 1983, and the Tigers defeated the Padres in 1984.
10. Hall of Fame player Robin Yount played his entire career with which team in the 1980s?

Not just the 1980s, but Yount played his entire 20-season career with the Brewers. Robin won the AL MVP in 1982 and 1989. He never won a batting title, never led the league in home runs, but he was just an outstanding and balanced all rounded player. Robin retired in 1993, then was inducted into the Hall of Fame in his first year of eligibility in 1999.
Source: Author Nightmare 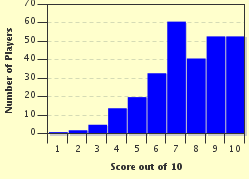 Go to MLB by Season Quizzes