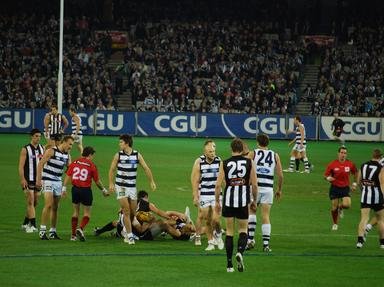 A quiz on the most successful club in Australian Rules history

Share on Facebook
Share on Twitter
Share by E-Mail
Author
mrjeremy
Time
3 mins
Type
Multiple Choice
Quiz #
315,810
Updated
Dec 03 21
# Qns
10
Difficulty
Average
Avg Score
7 / 10
Plays
195
This quiz has 2 formats: you can play it as a or as shown below.
Scroll down to the bottom for the answer key.

Quiz Answer Key and Fun Facts
1. When the Power first entered the AFL in 1997, why did they not use the name of their SANFL (South Australian National Football League) affiliate Magpies?


Answer: Because the AFL already had a team called the Magpies

The Magpies is the name of fellow AFL club Collingwood.
2. In 1997, Port Adelaide played their first ever match against whom?

Unlike their South Australian rivals, the Crows, the Power were not victorious on their debut.
3. In 1997, who was elected the inaugural captain of the Power?

Wanganeen, the first ever aborigine to win the MVP award and the Brownlow Medal was signed from Essendon. Primus would succeed him. Montgomery never became the captain, and Simpson never played for the Power.
4. Port Adelaide was the first AFL club to do what?


Answer: Give their captains the number 1 jumper

Port has always given the jumper to their captain, and if the ex-captain is still playing, he is given his old number back.
5. How many games did Port win in their 1998 season?

In 1997, they won 9, drew 1 and lost 12. However, the year after they would get a new coach, Mark Williams, who would turn the club around.
6. How many seasons did Power take to make the finals and win their first finals match?

This was the year 2004 they won the Grand Final against Brisbane.
7. In 1997, the Power chose the which colours to play in?

No teams uses red without another color (Melbourne is red and blue for example), red, white and blue is the colors for the Western Bulldogs and red, yellow and blue refers to the crosstown rivals, the Crows.
8. In 2004, who was the first player to be picked under the father-son rule?

Bretts father Russell was a legend for the SANFL Port Adelaide Magpies. Brad is his cousin and played for West Coast.
9. In 1997, Port Adelaide elected to play in the same stadium as rivals Adelaide Crows. What stadium was it?

Hindmarsh is a soccer ground. Adelaide Oval host cricket and occasionally the odd rugby match. Aurora is in Tasmania.
10. What year did the Power first make the finals?

In their third season, they scraped in. They lost to Hawthorn by eventual Premiers North Melbourne by 44 points, but the Power played a hard fought match.
Source: Author mrjeremy

This quiz was reviewed by FunTrivia editor Nightmare before going online.
Any errors found in FunTrivia content are routinely corrected through our feedback system.
Most Recent Scores
Jan 06 2023 : Guest 1: 8/10
Dec 22 2022 : Guest 101: 10/10 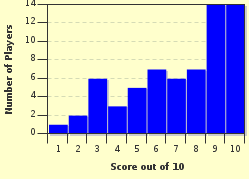 
Other Destinations
Explore Other Quizzes by mrjeremy