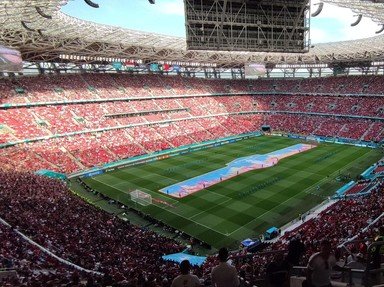 You thought you knew everything about Ajax? Well, you don't! And here's the quiz to prove that. Have fun, good luck or whatever.

Share on Facebook
Share on Twitter
Share by E-Mail
Author
jaydel
Time
5 mins
Type
Multiple Choice
Quiz #
123,430
Updated
Dec 03 21
# Qns
10
Difficulty
Tough
Avg Score
5 / 10
Plays
360
This quiz has 2 formats: you can play it as a or as shown below.
Scroll down to the bottom for the answer key.

In 1919 Ajax won the title undefeated, for the first time. Ajax won the title after 22 regional matches and 8 play-off matches. Only six matches were drawn, the remaining 24 were won. In 1995 Ajax played 34, won 27, drew 7 in the national competition.

In the Champions League Ajax had to bow to no one either in eleven matches. In fact, the only time Ajax was beaten that season was against Feyenoord in the national Cup. Mike Obiku scored the golden goal to make it 1-2.
2. What does Ajax have in common with the likes of Barcelona, Juventus and Bayern Munich?


Answer: they lost a final in Europe

In 1969 Ajax could have made history by being the first Dutch club to win the European Cup, but they lost 1-4 to a rampant AC Milan. In 1988 they couldn't retain the Cup-Winners Cup, losing 0-1 to Belgian side KV Mechelen, and in 1996 they went down on penalties to Juventus in the Champions League final, after drawing 1-1 at full-time.
4. Ajax has managed to score more than 20 goals against the same club in one season?

It happened in the 1930-1931 season against Delft side V.U.C. In the first match in Delft, Ajax won 9-0. In the second match, a few weeks later, 9-0 was the score at half-time. At the end Ajax almost doubled that up, winning 17-0!
5. In 1941, during German occupation, Ajax was involved in one of the most amazing matches in its history. What happened?

It could have become a rout, after V.U.C. went 6-0 ahead at the interval. But after halftime Ajax went for it and came back, scoring the last goal from the spot.
6. In 1980 Ajax was hit for six, at home! Who was the culprit, scoring 6 goals at Ajax's home ground?

The score was 3-6. What was surprising was not the margin or scoreline, but the fact that such modest opposition was able to inflict that upon them was quite humiliating! Curiously enough, a few weeks later Ajax won the title.
7. Ajax has a positive score against bitter rivals Feyenoord. But that doesn't mean that it hasn't suffered some crushing defeats, the biggest of them in the 1960s. What were the scores?

It might surprise you, but in the sixties Ajax wasn't the swinging, fluent playing club it became later on. That role was for Feyenoord. And when the Rotterdam club was on a roll, it could produce some dazzling performances, as Ajax found out in 1960 and 1964.
8. Like so many clubs, Ajax hasn't always played in the current strip. The first time it was worn was in 1911. Why was the original one changed?


Answer: It resembled the strip of another team

In fact it was the second change. In the first year, Ajax played in a almost entirely black outfit. A red ribbon could be worn around the waist or the neck. The next few years Ajax played in a strip with black trousers and red and white stripes on its shirt, the same as Sparta Rotterdam had. So when Ajax promoted, it meant that two teams with the same strip would meet. Ajax had to change again and chose the famous shirt we all know so well.

The black socks however were worn until well into the sixties, before Ajax current strip was complete.
9. Ajax have never been relegated from the First to the Second Division?

Ajax relegated once. It happened in 1914 after three years in the top flight.
10. In 1917, nobody could argue that Ajax had the best team in the land. But they weren't crowned champions. Why?


Answer: they played in the second division

As World War I went on, Ajax was in prime position to win promotion, but the Dutch FA inexplicably changed the rules during the play-offs. Despite fierce protests Ajax had to comply and played another season in a lower division. It became a season in which Ajax never lost a match.

Not in the national cup and not in friendlies against the opposition they should have played, including the eventual national champions.
Source: Author jaydel


Other Destinations
Explore Other Quizzes by jaydel