This quiz is about Phoebe Buffay on "Friends."

Quiz Answer Key and Fun Facts
1. Who was Phoebe's boyfriend that ate chalk?

Joey: "Come on, you're going out with the guy, there's has to be something wrong with him." Chandler: "All right Joey, be nice. So does he have a hump? A hump and a hairpiece?" Phoebe: "Wait, does he eat chalk? Just because, I don't want her to go through what I went through with Carl."
2. Finish this quote from Phoebe: "I'm just gonna pass on the concert, because I'm just not in a very _____ place right now."

Phoebe: "I'm just gonna pass on the concert, because I'm just not in a very Hootie place right now." Rachel: "Me neither." Joey: "Me too." Monica: "Guys, we bought the tickets." Phoebe: "Oh, well, then you'll have extra seats for all your tiaras and stuff."
3. In "The One At The Beach," who does Phoebe find out that her birth mother is?

Phoebe Sr: "I think that a person should know where they come from. Which is why I, okay, I'm your mother."
4. In "The One With All The Wedding Dresses," where did Phoebe rent the wedding dress?


Answer: It's Not Too Late

Monica: "Oh my God. We're really sad, aren't we?" Phoebe: "Yeah, I think we are." Monica: "This isn't even my dress." Phoebe: "Well, at least you didn't rent yours from a store called It's Not Too Late."
5. When Phoebe wrote to "Sesame Street" after her mom died, what did they send her?

Phoebe: "Right after my mom killed herself, I was just in this really bad place, you know personally. So, I just thought that it would make me feel better if I wrote to "Sesame Street" because they were so nice when I was a little kid. No one ever wrote back." Chandler: "Well you know a lot of those Muppets don't have thumbs." Phoebe: "All I got was a lousy keychain. And by that time I was living in a box. I didn't have keys."
6. In "The One Where Ross Got High," who did Phoebe say that she was dreaming about?

Phoebe: "I dreamt that he saved me from a burning building and he was so brave and so strong and it's making me look at him totally differently. I mean he used to be just, you know 'Jack Geller - Monica and Ross's dad' and now he's he's 'Jack Geller, dream hunk.'"
7. In "The One With Phoebe's Cookies," when did Phoebe say that she was going to die?

Ross: "Pheebs, come on isn't there any relative that would have the recipe? What about your sister?" Phoebe: Oh no, I made a promise to myself that the next time I would talk to Ursula would be over my dead body and that's not happening until October 15th, 2032."
8. In "The One With The Halloween Party," what was Ursula's fiance named?

Phoebe: "She is lying and I bet I can prove it. Excuse me. Not a prayer chain, but what looks like a detailed drawing of a bank floor plan. Okay, here's the nametag from the restaurant where she works as a waitress. Not a teacher, a waitress. Here's her driver license, this ought to be good, she always lies about this. How old did she say she was?" Eric: "She told me she was 25." Phoebe: "Oh, I almost don't want to show this. Just remember I'm a minute younger."
9. In which episode of season 9 does Phoebe first meet her future husband, Mike?


Answer: "The One With The Pediatrician"

Phoebe: "Why did you go along with that?" Mike: "Because I was told I'd get a free dinner, which I didn't and that I'd meet a pretty girl which I did." Phoebe: "That's true. Well, is anything you told me about yourself true?" Mike: "My name in Mike, and I do play piano." Phoebe: "Prove it." Mike: "There isn't a piano here." Phoebe: "That wouldn't stand in the way of a true pianist."
10. In "The One With Phoebe's Wedding," who walked Phoebe down the aisle?

Phoebe's stepdad was supposed to do it first, then Joey. Finally Chandler did it.
Source: Author 12friends12

This quiz was reviewed by FunTrivia editor ladymacb29 before going online.
Any errors found in FunTrivia content are routinely corrected through our feedback system.
Most Recent Scores
Dec 22 2022 : Guest 69: 9/10
Dec 04 2022 : Guest 99: 8/10 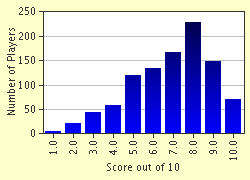 
Other Destinations
Explore Other Quizzes by 12friends12