4-H and FFA are two of the largest youth organizations in the USA! They both have their roots in agriculture, but have extended beyond that. I hope you enjoy my quiz about them!

Quiz Answer Key and Fun Facts
1. What is the symbol of 4-H?

It is a green four leaved clover with a white H on each leaf.
2. What do the four H's stand for?

You use your head, heart, hands, and health all to better live your life.
3. Finish this sentence "I pledge my head to..."

That is the first line of the 4-H pledge. The whole pledge is "I pledge my head to clearer thinking, my heart to greater loyalty,
my hands to larger service, and my health to better living,
For my club, my community, my country, and my world."
4. Of the following, which is the highest standard level of ribbon/color you can win at a 4-H fair?

The 4-H fair awards ribbons by color. A blue ribbon is normally the highest level of ribbon, followed by red and white. Green ribbons are sometimes awarded as a sign of participation for younger members. Sometimes a single Purple ribbon will be awarded to the very best of all the Blue ribbon entrants.
5. Which of the following is not considered a 4-H project?

Those are just a few of the many projects offered in 4-H. Others include, baking, painting, sewing, drawing, child safety, bike safety, and many many more.
6. What did FFA stand for in 2006?

In the late 1970s, they dropped Future Farmers of America. The organization is now simply known as The National FFA Organization.
7. In what city was National Convention held from 2000-2005?

It was held in Kansas City MO up until 1999. 1999 was the first year it was moved to Louisville KY. It was later held in Indianapolis.
8. Please complete this phrase..."I believe in the future of agriculture with a faith born not of words but of deeds-achievements won by the present and past generations of agriculturalists; in the promise of better days through better ways, even as the better things we now enjoy have come to us through...."


Answer: The struggles of former years

This is the first sentence to the FFA Creed.
9. What does CDE stand for?

These are commonly referred to as contest. They can include things such as, livestock judging, poultry judging, parly pro, horticulter judging and much more.
10. According to the opening ceremony, "FFA members, Why are we here"?


Answer: "To practice brotherhood, honor agricultural opportunities and responsibilities, and develop those qualities of leadership, which an FFA member should possess!"

Every FFA meeting starts of with an official opening ceremony conducted by the officers. I hope you enjoyed my quiz!
Source: Author ilaughlast 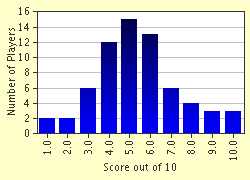 
Other Destinations
Explore Other Quizzes by ilaughlast