Mais oui, it's yet another French quiz for Funtrivia's francophiles. After all, how else will you know how to object when you notice that your teacher has put her cigar out in your pencil case?


Answer: But, what is that elephant doing in the middle of the living room?

"Donc" is a word that's interjected throughout sentences and which is probably best translated as "therefore: but not used in that way very often. If you see it in this sentence, "je pense donc je suis" you've got the Thinker's famous sentence..."I think therefore I am." But if you hear, "mais qu'est-ce que tu bois Doudou dis donc?" then don't bother with the donc! Beauty salon might be 'salon de coiffure' or a few other terms that are used throughout France. The Salon that I refer to in the false sentences is the literary gathering in the late nineteenth century where authors and others got together and discussed literature or the annual painting exhibition in Paris.
2. See if you can find the English for this French sentence: "Mon frčre Arnold a épousé la fille du Roi des singes. Ils ont eu un fils, le Prince. Me voici l'oncle du Prince des singes!"


Answer: My brother Arnold married the Monkey King's daughter. They had a son, the Prince. Here I am the Monkey Prince's Uncle!

There are two basic ways to indicate marriage in French as I'm sure you know. "Se marier avec" and "épouser". Epouser is a bit more formal, but easier to manage for a beginning student. One of the things that is shown in this example is the possessive and the difference in French as opposed to English.

In French you do the possessive with de or de plus article. La fille du roi. The daughter of the King, instead of the King's daughter. If you add another possession in English it gets complicated.

The King's daughter's monkey's uncle. In French this would be: L'oncle du singe de la fille du roi. Yet another lesson of Absurd French from Bruyere!
3. Here is some handy information for you in French should you ever require it. Can you find the English equivalent? "Madame Sand, il me semble avoir aperçu votre cigare dans ma trousse. Pourriez-vous vérifier et l'enlever si cela s'avčre vrai?"


Answer: Madame Sand, it seems to me that I noticed your cigar in my pencil case. Could you please verify this and remove it if this proves to be true?

La trousse is used for a case or a small box. "Trousse de couture" is a sewing box or bag. Every student in France carries around a trousse as they are needed for underlining math problems, whiting out mistakes and writing over them, and playing with erasers. Not to mention the ink capsules required for fountain pens when you are in elementary school, yes, it's true!
I've put in a tribute to that cigar-smoking lady author George Sand in this example.
4. How would you say this in English? "Les papillons vont en Amérique du Sud pour danser le tango en Argentine, survoler la plage au Brésil, et chercher de l'or au Pérou."


Answer: Butterflies go to South America to dance the tango in Argentina, fly over the beach in Brazil, and search for gold in Peru.

I often speak of butterflies in my Absurd French quizzes because they are such marvelous creatures. Voler is to fly (as well as to steal), and survoler is to fly over. Chercher de l'or is to hunt for gold. Chercher can be used for 'to search' as well as to look for. Je cherche mes chaussures. I'm looking for my shoes. You may come across the expression, 'ce n'est pas le Perou' which means it may not be a country paved in gold like in the legends, but it's fine. I put the people chasing in there for fun as what if butterflies chased us instead of the other way around?
5. How would you translate this French into English? "Vos cheveux sentiront le chčvrefeuille!"


Answer: Oh my ! Mr. Huppert's Chihuahua is wearing his T-shirt with a packet of Marlboros in the sleeve. I thought he'd stopped smoking

Un tricot de peau is a more formal name for T-shirt although most people in France would say T-shirt pronounced Tee shhherrrrt with the accent on the shirt bit. Tricot means anything that is 'knit'. Tricoter means to knit. Those of you who knew the era of the cigarette packet in the t shirt sleeve will have a more vivid picture of our Chihuahua going through his James Dean phase. Reminder: smoking is known to cause serious health problems and the author of this quiz does not endorse smoking except to illustrate her examples of absurdity. No real dogs were harmed during the writing of this question. I did not say anything about Chihuahuas. Just kidding, I find them very cute. So, Chihuahuas should not smoke cigarettes or even hold packs in their T shirt sleeves as it might be harmful to their health and balance!
7. How would you translate this suggestion into English from French? "Tiens, qu'est-ce qu'on mange Chérie? Ah, les pieds de poulets ŕ la mayonnaise ? J'ai une bonne idée ! Si on allait manger au restau ce soir ?"


Answer: Say, what are we eating tonight, sweetheart? Ah, chicken feet with mayonnaise? I've got a good idea. What if we were to go to a restaurant tonight?

The reason that this question is fairly absurd is that French people take the time and effort to fix good meals and most of them try to eat together most of the time if at all possible. Even the most haggard housewife and mother would never risk her reputation with chicken feet and mayonnaise. Frozen foods have made great inroads in France and the quality is far superior to any other country I've tried it in, but, they really prize themselves on cooking well at home as well as in restaurants. Oh yes, KFC exists in some parts of France as I've visited one for fun.
8. Could you find a way of saying this in English? "Jean-Luc a réussi ŕ escalader le mur du jardin sans réveiller sa mčre qui l'attendait avec impatience avec une bougie ŕ la main."


Answer: Jean-Luc managed to climb the garden wall without waking up his mother who was waiting for him impatiently with a candle in her hand.


Answer: Mom ? Did you know that there was a python in the washing machine? I got out my copy of Harry Potter to talk to him, but he does not understand me.

I've already told Absurd French fans about a python on the basket beneath the seat of my chair in elementary school no doubt. Herbie wherever you are (probably selling used cars as you could have sold anyone anything back then) thanks for the excitement for a ten-year old girl with a python on her chair! I've made lots of progress since then with reptiles because I've held a lizard.

It was an emergency though. Harry Potter was an enormous success in France and enjoyed the same hoopla that it did everywhere else. Le lave-linge is another term for 'la machine ŕ laver'
10. What is happening in this standard French textbook scenario?: "Oh zut alors! J'ai oublie mon portefeuille. Pourrais-tu me pręter dix francs ? Oh merci. Oh la la ! tu es sympa !"


Answer: Oh darn it ! I forgot my wallet ! Could you loan me ten francs? Oh thank you! Oh dear! You are so nice!

This is a tribute to every beginning French textbook that invariably gives this scenario. Plus, if the book is old, they have francs, which mean that the student is going to sound silly as the franc went out in 2000. Then, most French students would not use such delicate terms as zut! Nor would they have their conversations spiced with such delicate exclamations as the textbooks would have them think. And honestly, who would fall for the old, left my wallet or I'm out of money bit? 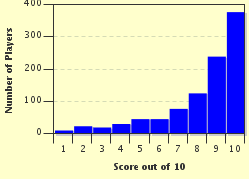