Fun facts about airlines past and present, including advertising slogans, nicknames, and even how they painted their planes.

Quiz Answer Key and Fun Facts
1. What airline was once known as "the proud bird with the golden tail"?

Prior to reorganizing under a Chapter 11 bankruptcy in the 1980s, Continental used to paint the tails of their planes gold. They also had a slogan "we really move our tails for you."
2. This airline was known as "the only way to fly"?

Their TV commericals featured an animated bird sitting on top of a plane, reclining against the tail. As the bird recited this slogan, the destination city and air fare were shown on the tail.
3. "Up, up, and away" was one advertising slogan of this airline.

TWA borrowed this slogan from the hit song of the same name by the group "The 5th Dimension", probably because it rhymed with TWA.
4. This airline was known as "the top banana in the west."

Hughes Air West, founded by the eccentric multi-millionaire Howard Hughes, painted its planes bright yellow - hence the banana reference.
5. This airline painted a smile under the cockpit area on the front of their planes to give the aircraft the appearance of a happy face.

Pacific Southwest Airlines, better known as PSA, primarily served large and medium sized cities in California in the 60s and 70s. It was purchased by US Air in the late 1980s. One of their advertising slogans was "Catch our smile."
6. This airline lets you know "you are now free to move about the country."

Southwest has become one of the more profitable airlines of the new millenium, offering low fares, no frills, and serving small cities that other airlines do not serve.
7. Speaking of Southwest Airlines, why do their planes have hearts painted on the side near the entry door?


Answer: The company's headquarters is in Dallas at Love Field

Since the much larger DFW airport opened, Southwest is the only commercial air carrier using Love Field, which was Dallas' primary airport until 1974.
8. This airline featured commericals with stewardesses who said "fly me."

Usually the line was something like "Hi, I'm Cheryl. Fly me to Miami." Of course, the name of the stewardess and the destination changed depending on the commerical. National was a Miami based airline; their planes were painted white, yellow, and orange with a smiling sun on the tail. It was bought by Pan Am in the late 1970s.
9. This airline dubbed itself as "something special in the air."

American was one of the few survivors of the deregulation of the industry in the 1980s.
10. In the academy award winning movie "Rain Man", Dustin Hoffman's character refuses to fly unless he can travel on this airline, because it "never crashes."

Because Qantas does not fly from Cincinnati to Los Angeles, Hoffman and Tom Cruise have to drive across the country. Qantas is an Australian based airline; its name was derived from Queensland and Northern Territory Aerial Services.
Source: Author 81gaucho 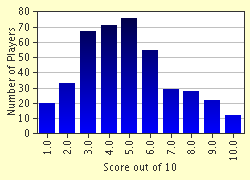 
Other Destinations
Explore Other Quizzes by 81gaucho