How many of you have read the Harry Potter books in French? If you have, this will be easy. If not, a little French knowledge will help you to guess answers.

Quiz Answer Key and Fun Facts
1. The Harry Potter books have been translated into many languages. What is the title of the first book, in the French translations?

It translates as "Harry Potter at Wizard School". Obviously, some of the characters' names have had to be changed, so that speakers of another language can manage to pronounce them, and so that the connotations surrounding certain names were preserved. Harry is still Harry though. The French editions were translated by Jean-François Ménard.
2. The name "Hogwart's" is quite difficult for a French speaker to pronounce, so the name of Harry's school was changed. What was it changed to?

"Collčge Poudlard, école de Sorcellerie" is still led by Albus Dumbledore and Minerva McGonagall. Ménard apparently suffered a breakdown after working ten-hour shifts for two months, during the translation of "Harry Potter and the Goblet of Fire". He insisted that he wanted to ensure the 'made-up' words still meant something in French.

For example, he chose 'moldu' for 'muggle' - from the French 'mol', meaning 'soft', it implies someone "a little soft in the brain."
3. Which of these characters keeps their original name in the French translations?


Answer: neither had their name changed

Both Ron and Hagrid stay the same, although "Weasley" is not easy for a French speaker to pronounce. Hermione Granger also gets to keep her own name.
4. Which company published the first Harry Potter books in France?

Gallimard publishes the hardback copies, and their sub-branch, Folio Junior, publishes the soft-cover editions. When the fifth book ("Harry Potter and the order of the Phoenix") was released in English in June 2003, it became the first English language book to top the bestseller list in France, selling between 25,000 and 30,000 copies in the first week.

It was not due to be released in French until December 2003.
5. What is the correct French title for the third book in the series?

"Londubas" just doesn't have the same comical ring to it as "Longbottom". The character is still as amusing though.
7. Draco Malfoy is an unlikeable, unpleasant, and downright nasty piece of work. What is he called in French?

JK Rowling deliberately chose the name "Malfoy" as it is a corruption of the French-Latin 'mal foi', or 'bad faith', which perfectly sums up Draco's character. With a name like that, the poor boy never had a chance!
8. The names of the four Hogwart's Houses are also changed. Which House is renamed "Poufsouffle"?

I think the word "Poufsouffle" perfectly captures the spirit of Hufflepuff. The other Houses are Gryffondor, Serpentard (Slytherin) and Serdaigle (Ravenclaw). By the way, in the Canadian (Quebec) French editions of the books, the house names remain the same as the English, with the exception of Poufsouffle.
9. Which character is renamed "Miss Teigne" in the French translations of the Harry Potter books?

JK Rowling named Filch's cat after Jane Austen's unpleasant, snooping Mrs Norris in "Mansfield Park". With this association meaning little to French readers, a different name was needed. 'Teigne' is French for ringworm, or slang for an irritating person.
10. "Praline longue langue" is the inspired translation of something featured in "Harry Potter and the Goblet of Fire". It was invented by Fred and George Weasley, and deployed with comic consequences on poor, innocent little Dudley Dursley. What was this sweet (but nasty) concoction?

Literally translating as "long-tongue-praline", the phrase carries the same amusing tongue-twister effect, and the same meaning as the English equivalent.

Reading the books in French has not only helped my French, but also made me realise just how challenging JK Rowling's books are to translate. There are a multitude of made-up names and words, that still contain some meaning, and are very difficult to translate well. I can highly recommend the French versions - and I'm off to try the German ones next.
Source: Author Elanor 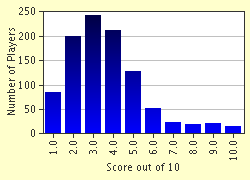 
Other Destinations
Explore Other Quizzes by Elanor