Counting in Japanese can be very confusing for someone who is used to Western ways of counting. This quiz will test your knowledge on the counting system of Japan, and maybe you'll learn a few new things!

Quiz Answer Key and Fun Facts
1. We'll start with the basics. In order to start counting in Japanese, you need to know how to say the number one. So how do you say it?

You might have heard phrases such as "ichi-ban" or "number one".
2. In English script, what is the Japanese equivalent to the number two?

"Ni" is the number two in Japanese. Some words you might hear it in: "ni-gatsu" or February (second month), "ni-nensei" or second-year student.
3. "Kaku" in Japanese can mean an "angle", so what would "san-kaku" mean?

"Shi" is the word for the number four. As you may or may not know, "shi" is also the word for "death". Therefore, Japanese people will tend to avoid doing things involving the number four, or pronounce the word "yon" instead. For instance, when you give a gift of food, you should always make sure that the amount of food is never given in a multiple of four as it is considered unlucky.
5. Of the following, which of these go in numerical order from least to greatest?

From least to greatest is "go" (five), "roku" (six), "shichi" (seven), "hachi" (eight), and "kyuu" (nine).
6. There are alternate ways of saying the numbers four and seven in basic Japanese counting. What are they respectively?

The alternate ways of saying four and seven is "yon" and "nana" respectively. For instance, "yon-pun" means four minutes (you wouldn't use "shi-pun" in this case), and "nana-fun" means seven minutes (again, you wouldn't use "shichi-fun" in this case).
7. There is also an alternative way to say nine that is often not understood as well. What are the two ways of saying nine?

"Juu" is Japanese for ten. However, sometimes this word will leave out the last "u" depending on the circumstance. For instance, "juu-ji" means 10 o'clock, while "juppun" means 10 minutes. Some people will also interchange the short "ju" for "ji" instead, although this is rare.
9. Which one of these is not a way of saying the number zero in Japanese?

Interestingly enough, "zero" (pronounced zeh-roh) is commonly used for the word zero. "Rei" and "maru" are nicknames for zero, but aren't necessarily defined as zero.
10. What is the Japanese word for one hundred?

You might have heard of the comet named "hyaku-take" which was translated roughly to "hundred tails".
11. What are the Japanese words for one thousand and ten thousand respectively?

Japanese numbers place the value before the unit. Therefore, "san-jyuu" literally means "three-tens" and "ichi" means "one" giving you 31.
13. How would you say the number 562 in Japanese?

As the Japanese use "man" (10,000) as their base units rather than 1,000, the Japanese counting system can get a little confusing. In this case, "hyaku-man" literally means a hundred ten-thousands which would give you 6 zeros or 1,000,000. "Sen-sen" (which theoretically would mean a thousand thousands) does not exist in Japanese.
15. This is a toughy for even the advanced Japanese students. What is the Japanese word for 100,000,000 (one-hundred million)?

Again, because of the Japanese counting system being based on units of 10,000, there is a need for a new original unit word when you reach 100,000,000. The Japanese do have a word for it, and it happens to be "oku". "Man man" and "hyaku sen sen" aren't real numbers in Japanese and sound like jibberish to a native Japanese speaker. 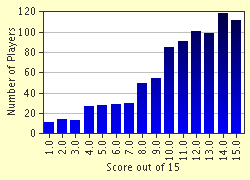 
Other Destinations
Explore Other Quizzes by daimaoh34