Referring to people in Japanese Quiz

In Japanese, it's not as simple as "you" and "I". How you refer to yourself depends on who you are and to whom you're talking. How you address, or refer to, someone else depends on your relationship with them. Show your mastery of these arcane matters!

Quiz Answer Key and Fun Facts
1. Which of the following is the politest way to say "I"?

"Watakushi" is generally used only on the most formal occasions, with "watashi" being the ordinary polite form of "I". "Boku" is a casual form used by men, and "ore" is a somewhat more rough and tough version of "boku".
2. Which of the following is the politest way to say "you"?

"Anata" is a polite way to say "you", with "kimi" being a less formal version - it is not used to one's elder, for example. "Omae" is very casual, and expresses a degree of superiority on the part of the speaker. "Temae" is rather hostile - if someone says this to you, you're probably having an argument.
3. Which of the following honorifics are you least likely to hear used?

"Dono" literally means "lord", and you're more likely to see it in a historical drama than hear it in daily life. It is sometimes used, however, on such occasions as presentation ceremonies - "This award is presented to [insert your name here]-dono".

"San" is the normal honorific applied to other people's names as a matter of course, and "chan" is a baby-talk version of it applied to children or close friends. "Sama" is a more formal version of "san" - not especially common, but you will hear it used to address, for example, customers in shops.
4. What is the most common way for a Japanese woman to address her husband?

"Anata", the formal word for "you", is a respectful but affectionate form of address (sometimes shortened to the less formal "anta"). "San" is not used to address a spouse. "Danna-san" is how she might refer to her husband when talking about him to someone else, but not to address him directly. "Otto" is a descriptive word meaning "husband", but is not used as a form of address.
5. When posting a letter, and writing the recipient's name on the envelope, which honorific would you use with their name?

"Sama", a very polite and formal form of "san" is always affixed to the addressee's name. I'm not sure exactly why this is, but note that "sama" is used to address customers and clients; the addressee is perhaps being treated here as a customer of the postal service.
6. How do the Japanese refer to the current emperor of Japan, called in English Emperor Akihito?

"Tennô Heika" simply means "His Majesty the Emperor". This is how an emperor is referred to during his reign. "Heisei" is the name given to the period of Akihito's reign, and he will be known to posterity as "Heisei Tennô" (the Heisei Emperor") after his death, but not before. "Akihito" itself is the name he bore as a child, and is no longer used by the public to refer to him. "Tennô-sama" is never used.
7. How would a junior member of a yakuza organization address one of his seniors?

"Obaasan" (or "obaachan") is the way to talk to your grandmother. "Obasan" is the word used to address an aunt, "ojisan" an uncle and "ojiisan" a grandfather. All of these words are also used generally to address or refer to anyone, including strangers, who falls into the appropriate group.

This can be a useful way of knowing when you've reached a certain age - the first time a kid in the street addresses you as "ojiisan" instead of "ojisan", you know old age has begun to show itself on your features.
9. Tanaka Keisuke is a member of the school band. Uchida Tarô is an older member of the club. How does the younger member address the older?

"San" is certainly used by younger people to address older people, but "senpai" is an honorific specifically applied to an older member of an organization that one belongs to. Although "senpai" implies that the person has greater experience and skill, he or she is still a fellow learner rather than a teacher, and does not merit being called "sensei".

As for "Tarô-san", Keisuke would never address his senior by the senior's given name.
10. Now, how does the older member most likely address the younger?

An older member of the club is not likely to use an honorific like "san" to address a younger member. "Kôhai", as you know if you've seen the movie "Rising Sun", is the opposite of "senpai". However, while "senpai" is attached to names as an honorific, "kôhai" is not.

Instead, the older member will simply call the younger by his or her name - possibly the given name if they're girls, almost invariably the family name if they're boys.
11. What aggressive way of addressing another person - the way, for example, a samurai might address another samurai whom he is about to fight - translates roughly as "precious sir"?

"Ki" means "precious" and "sama", of course, is a very polite honorific. Nevertheless, this is what you say to someone if you wish to imply that you would like to kill them. It comes from samurai times, and I assume is supposed to be ironic.

"Onore" is a different form of aggressive address that one would use to an enemy. "Omae-san" is another example of irony, combing the very informal "omae" with "san". It does not have any aggressive connotations. "Kami-sama" means "god".
12. To whom would a samurai be referring if he used the word "sessha"?

Combining the characters for "clumsy" and "person", this is a humble way of referring to oneself. You will occasionally see the more old-school samurai using it in comics or on TV shows.
13. Which of the following ranks is highest in the hierarchy of a company?

"Chô" (which, interestingly, is written with the character for "long") here implies a leader. The Japanese word for "company" is "kaisha". Taking the "sha" from this word and adding "chô" gives us "shachô" - the company president.

"Sensei" combines the characters for "ahead" and "life", and implies someone whose experience has given them knowledge, or wisdom, that they can usefully impart to other people. Doctors, teachers and political leaders all qualify. Police officers, while certainly addressed with respect, are valued for their protective function rather than for any sense that they have knowledge to pass on to people.
15. And finally, which of the following does NOT mean "you idiot!"

"Busu!" would translate instead as "you're ugly!" And on that unfortunate note, herewith we end our quiz!
Source: Author Finduskeepus 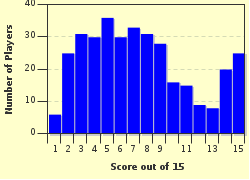 
Other Destinations
Explore Other Quizzes by Finduskeepus