Drive on the Right Trivia Quiz

Although accident statistics suggest that driving on the left is safer, more than two-thirds (164 out of 240) of the world's countries/territories drive on the right. Do you know which side to drive on?

Share on Facebook
Share on Twitter
Share by E-Mail
Author
EnglishJedi
Time
5 mins
Type
Multiple Choice
Quiz #
355,042
Updated
Dec 03 21
# Qns
10
Difficulty
Tough
Avg Score
6 / 10
Plays
326
This quiz has 2 formats: you can play it as a or as shown below.
Scroll down to the bottom for the answer key.

Besides the UK, all of the six remaining European places where you would drive on the left are former British territories. In addition, none of those six have potentially confusing land borders with a country that drives on the other side, hence Gibraltar is the odd one out above.

The other three European territories where you would drive on the left are Guernsey and Jersey in the Channel Islands, and the Isle of Man. Driving in Gibraltar was once on the left, but they switched over in 1929.
2. Staying in Europe, which was the last European country to change from driving on the left to driving on the right?

French drivers have used the right-hand side of the road since in 1792, but it took those countries on the Iberian peninsular more than a century to follow suit. Spain switched in 1924, and those with land borders soon followed suit (Portugal in 1928 and Gibraltar in 1929). Germany has always driven on the right, and many of their WWII conquests switched during that period (Austria in 1938, Czechoslovakia in 1939, Hungary in 1941, etc). Norway has always driven on the right and the rest of Scandinavia has eventually joined them --Denmark switched in the 18th Century, Finland in 1858, and Sweden in 1967.

The last Scandinavian country to switch, and the most recent European country to do so, was Iceland, in 1968.
3. It would seem to be incredibly inconvenient, not to mention potentially dangerous, if you had to switch from driving on the left to driving on the right every time you entered your country's capital city, but that was exactly the situation for 35 years in one European country. Which one?

Although there were very few vehicles on the road in the 18th Century, this strange potential cause of accidents happened in Denmark. Drivers within the city of Copenhagen switched to driving on the right in 1758 but the rest of Denmark did not follow suit until 1793.
4. Let's travel east to Asia now. Vehicles in Thailand drive on the left, which means that drivers leaving the Kingdom much switch sides at land borders with all but one of their neighbors. Which is the only country that borders Thailand which also drives on the left?

When Burma switched to driving on the right in 1970, Thailand was left with only one neighbour with whom there was not a switchover required at the border -- Malaysia. Traffic lights are used to switch traffic from one side of the road to the other at the major border crossings between Thailand and Laos (at the Friendship Bridge this takes place on the Lao side, and on the Second Thai-Lao Friendship Bridge it is on the Thai side) and on the Mae Sot Friendship Bridge between Thailand and Burma. Border crossings into Cambodia at Poipet and into Burma over the old Mae Sai Bridge are virtually uncontrolled, with just signposts reminding drivers to switch sides.
5. Considering the huge number of drivers in India, it is probably a good job that most of its land borders are with countries who drive on the same side as it does, the left. Which of its neighbours, home to more than 180 million people, is otherwise surrounded by countries that drive on the right?

With more than 180 million people, Pakistan is the world's sixth most populous country, and its millions of vehicles all drive on the left hand side of the road. That's okay if they go south across the border into India, but if they go in any other direction there is a tricky switchover to be made. Perhaps the most testing switchover occurs on the Khunjerab Pass between Pakistan-administered Kashmir and China. Pakistan also shares borders with both Afghanistan and Iran, both of which drive on the right.
6. We now head south from Asia to Oceania, which is dominated by Australia, where they drive on the left. Which Pacific Ocean island nation switched to driving on the left in 2009 to fall into line with the region's dominant country?

A former British colony, Fiji has always driven on the left, whilst the French overseas collectivity of Wallis and Futuna still follow their motherland's example and drive on the right.
7. We continue out eastward trek around the globe by crossing the Pacific Ocean to South America. Other than the former British colony of Guyana, which is the only South American country where they drive on the left?

The vast majority of drivers in South America drive on the right hand side of the road. The only countries to buck this trend are two of those three small nations on the Caribbean coast. One is the former British colony of Guyana and the other is the former Dutch colony of Suriname. Needless to say, the third of the group, French Guiana (technically part of France rather than an overseas territory), follows the example set by all other French drivers of sticking to the right.
8. Although all of mainland Central and North America (and most of South America) drives on the right, many Caribbean island nations still drive on the left. Which of the following follows the lead of the USA and drives on the right?

With many former British territories in the Caribbean, it is perhaps not surprising to find that many have maintained their colonial tradition of driving on the left. Amongst these are Jamaica, Bahamas, St Vincent, Trinidad & Tobago, Bermuda and Barbados. Formerly part of the Danish West Indies, the Virgin Islands (now divided between the British and U.S. sectors) perhaps surprisingly drive on the left rather than following Denmark's example. Perhaps also surprising is that Cuba would be anything in line with the USA, but their tradition of driving on the right dates back to their Spanish colonial era.
9. Finally, we travel east again (and south), this time across the Atlantic Ocean to Africa. In which of these former British territories in Africa still drive on the left?

This quiz was reviewed by FunTrivia editor stedman before going online.
Any errors found in FunTrivia content are routinely corrected through our feedback system.
Most Recent Scores
Jan 08 2023 : Guest 89: 3/10
Dec 16 2022 : Andyboy2021: 10/10 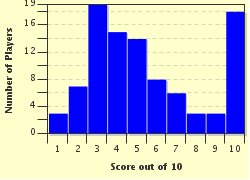