The red octagon of the stop sign is widely known, whether the word on the sign is "STOP" or its local equivalent. Here we look at some of these, and other cautionary signs, that if they don't actually tell us to stop, urge us to slow down and think.

Quiz Answer Key and Fun Facts
1. Sometimes an intersection that is not quite busy enough for traffic lights will have an all-way (or four-way) stop sign instead. Given that the sign pictured is in Ontario, Canada, who would have the right of way should two vehicles arrive at the same time?


Answer: The one on the right

If both vehicles have come to a stop at the same time, the one on the right will have the right of way. Had one stopped before the other arrived, the first car would have the right of way regardless of positioning. The size of vehicle doesn't make any difference, and if one road was considered to be of more importance than the other, it is likely only the minor road would have a stop sign.
2. Diamond-shaped yellow signs are often warning of something ahead of the driver. To what danger does the sign in the picture alert the driver, given that it is in Ontario?


Answer: Sharp turn to the left

The checkerboard pattern around the edge is a warning of danger. The turn indicated by the sign is in the direction the arrow is pointing.
3. The yellow diamond-shaped sign shown here on a Canadian street also has a small rectangular sign on the post below it, to clarify its meaning. What does it say?

The sign depicts a pedestrian strolling across behind one train into the path of a second on a parallel track. The signal is visible in the photo, so "No Signal" can be eliminated as a possibility, and a negative instruction or warning usually involves a line (often red) being drawn through the item or action that is prohibited.
4. What would you expect to happen if you saw this sign whilst driving along an Ontario road on a fine sunny day?


Answer: The paved road you are on is about to become a gravel or dirt road.

The sign is warning you to slow down and proceed cautiously, as you will be moving from the smooth ride of a paved road to a more uneven surface. There will also not be any markings on the road itself to guide you in deciding whether it is safe to pass any vehicles ahead of you.
5. The sign here is not a road sign, but still one that warns of danger. The railing here is protecting viewers from a major tourist attraction in Ontario that has claimed more than one life over the years. People with names like Wallenda and Blondin might ignore this sign, but most of us should not! Where is the railing located?

The grass in the photo should be a tip-off that we are not at the top of a tower, and Mount Royal is in Montreal, in Quebec. It might seem that such a sign would be redundant with the rushing waters pouring over the falls only feet away, but people do some strange things - perhaps in pursuit of a perfect photograph, perhaps on a dare. I'm happy to leave such bravado to daredevils like Nik Wallenda, who crossed the Falls in 2012 on a two-inch wide wire!
6. Here's another stop sign, but what's that it says? It means "Stop", to be sure, but in what language?

This French-language sign was spotted in Quebec City, capital of Canada's province of Quebec where French is the predominant of Canada's two official languages. It is interesting to note that some places in Europe, notably in tourist areas, use the English word "Stop" instead of the local language.
7. What does the sign shown here warn you to look out for? This one is in southwestern Ontario, but you might see it in Pennsylvania too.

This photo was taken in south western Ontario, near Kitchener, where there are significant Amish and Mennonite populations, who travel the roads in various types of horse-drawn vehicles. Caution is required when overtaking or meeting such conveyances.
8. What is the significance of the thin circular line around the figure's waist on this sign, spotted on a trip to Massachusetts?

When I first saw this sign in a town in Massachusetts I could not stop laughing. Surely it must be a joke? Though the "hula hoop" looked like it belonged there, research has confirmed that it is a clever bit of graffiti, in the form of a sticker, applied to an ordinary pedestrian crossing sign.
9. Whatever is crossing the road this time? The words don't help unless you speak the language, but the image should.

This sign is to be found on a First Nations Reserve in southern Ontario, and the language is Mohawk. Avoiding a slow moving turtle can be dangerous if one is driving too quickly, so caution is advised.
10. The shape of this sign tells us to stop, even if we don't speak this language. If I mention that this sign is in a country with two official languages, but that this is *not* one of them, where do you think this sign is located?

This sign is not many miles from the turtle crossing sign, and the language is once again Mohawk. If you picked up on that, looking at the turtle picture and noticing the snow would have helped you eliminate two of the choices. As far as safety on the roads is concerned, it is the shape of the stop sign that matters and alerts us to what we are expected to do.
Source: Author spanishliz 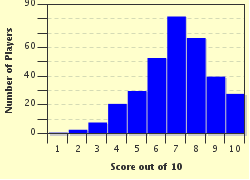 Related Quizzes
This quiz is part of series Fun with Commissions:

I didn't join a Commission in the Lounge until the 29th version, but I've been hooked ever since. This list contains not only the quizzes I have written for Commissions, but those written using my suggested titles. I had completely forgotten suggesting some of them!


1. Don't Feed the Animals Average
2. You Can't Get There From Here Easier
3. Stop Sign Average
4. Going Overboard Average
5. The Further Adventures of Ralph the Llama Average
6. Bob's Your Uncle Average
7. Kicking the Habit Average
8. Toasting the Queen Average
9. The Final Curtain Average
10. Is It Under the Couch? Average
11. Zoinks! Average
12. Hazard Warning Average