Laying Down the Tracks Trivia Quiz

No, we're not going to be creating music. The tracks in question have already been laid, and support some of the best known trains of the world. Let's find out about them.

Quiz Answer Key and Fun Facts
1. The destination of the Bernina Express is Italy, but it begins its journey in which country?

The scenic route runs from Switzerland to Tirano, located in northern Italy, crossing the Alps on the way either via tunnels or bridges. The name comes from the Bernina Pass, part of the route, which is more than 2,200 metres above sea level. There are two routes - leaving from Chur on the Albula Railway or from St Moritz on the Bernina Railway.

Your photo clue is of some rather tempting Swiss roll.
2. Located in Alaska, this train travels between Anchorage and Fairbanks during the summer, stopping at Denali National Park. The train's name consists of two parts - Denali followed by which celestial body?

In the early twenty-first century, the service begins in the middle of May and ends in mid September. As well as the park, the train stops in Wasilla and Talkeetna and is an ideal way of seeing some of the spectacular scenery of this rather remote part of the USA. During the winter months, the same route is travelled under the name of the Aurora Winter Train.

Your picture hint shows Patrick Star, one of the characters from the television show 'SpongeBob SquarePants'.
3. Passengers on the Blue Train are among the world's most cosseted, with butlers, compartments with carpets and individual en-suite facilities. Which country provides this service?

Unsurprisingly, the engine and carriages are painted in a striking blue livery. The service dates from the early 1920s when it was a service from Johannesburg to Cape Town. Enhancements were made, such as air conditioning and dining facilities, although the service was suspended during the Second World War. There used to be four Blue Train routes covering different parts of South Africa, but this was reduced to only one in 2007, travelling from Cape Town to Pretoria and vice versa. Special deals are sometimes offered on other routes, too.

Your photo clue is of South Africa's national animal, the springbok.
4. This Australian train runs between Adelaide and Darwin, via Alice Springs. What is its nickname?

The original name of the service was The Afghan Express, but it has long been known by the shorter version of The Ghan. The route is nearly 2,000 miles long and takes more than two days for its journey between the north and south of Australia. The symbol of the service is the silhouette of a man on a camel, with both the name and symbol said by some to recognise the Afghans who came to Australia to explore the outback.

The photo shows the flag of Afghanistan as an additional clue.
5. The luxury Trans-Siberian express, running between Moscow and Vladivostok, operates using which name in the early twenty-first century?

The Siberian route is not the only one offered by the Golden Eagle company, but it is probably the most iconic. The rail journey takes fourteen days to travel from Moscow to Vladivostok, with stops at Yekaterinburg, where the last Russian tsar and his family were executed, Lake Baikal and Ulaan Bataar in Mongolia, among others.

A literal photo clue for you this time, showing the head of a magnificent golden eagle.
6. Although not an official name, the train which runs from the north to the south of Vietnam is often referred to by which of these names?

With the official name of the North-South Railway, the line was originally built by the French during colonial times, with work beginning in 1899 and finishing in 1936. The Japanese made use of it during the Second World War, and the railway suffered much damage during the Vietnam War. The unofficial name refers, as you might expect, to the reunification of North and South Vietnam, and the line runs between Hanoi and Ho Chi Minh City.

Despite my best efforts, trying to illustrate 'reunification' defeated me, so I settled for a photo of the express itself travelling through Vietnam.
7. The next railway is the highest mainline service operating in the northern part of Europe, with part of its route crossing the Hardangervidda plateau. To give you its name would be a complete giveaway, but you should have enough clues to work out the answer - in which country does this operate?

The Bergen Line, or Bergen Railway, runs between Bergen and Honefoss, covering a distance of around 230 miles, or 370 kilometres. The original railway dates back to 1883, when a narrow gauge line ran from Bergen to Voss. It was later extended as a standard gauge railway and is owned and operated as a state owned asset.

The photo clue is a crown, Norway being the only monarchy among the listed options.
8. Founded in Canada in 1990, this luxury train service offers four main routes in 2016. They are based around which mountains, which form part of its name?

The Rocky Mountaineer has routes visiting Banff, Vancouver, Kamloops, Whistler and Jasper. It even ventures across the border into Seattle on its coastal service. One of its routes, called the 'First Passage to the West', covers some of the original part of the Canadian Pacific Railway, laid in the late nineteenth century, which linked the eastern part of Canada to the west.

The picture clue has nothing to do with mountains, but shows the cross section of a stick of rock from one of England's seaside resorts, Brighton.
9. The original Orient Express no longer runs, but another, privately owned, service retains part of the name. Beginning in London, and travelling through the Simplon tunnel, the VSOE service includes the name of which city in its name?

The Venice-Simplon Orient Express (VSOE) was set up in 1982 by an American and is owned in 2016 by Belmond Limited, a luxury hotel and leisure group. The first trip offered ran from London to Venice, although the service now runs to many major European cities, including Paris, Instanbul and Stockholm.

The photo shows a selection of gondolas, the main mode of transport in Venice.
10. A heritage narrow gauge railway, dating from 1882 and located in Colorado, USA, runs between Durango and which other town?

Construction of the original railway took only eleven months, laying down a track of forty-five miles. In 2016, the railway is still operating from its original premises in Durango, with the town itself not existing until it was founded by the railway company. Even in its early days, the line was advertised as a way for passengers to see parts of Colorado not otherwise accessible, although the main purpose was the transport of gold and silver ore.

The picture clue is of some ingots of silver, referring to both the correct answer and the original use of the railway.
Source: Author rossian 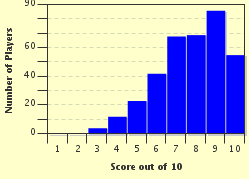 Related Quizzes
This quiz is part of series Sites and Sights:

This list has my quizzes from the World category, covering places of interest.