This is an "odd-man-out" quiz about the cars of Britain in the 50s & 60s. No technical knowledge is needed, just a memory of name plates, makers and models.

Quiz Answer Key and Fun Facts
1. Which of these British cars was not a Ford?

The Consul became the "Consul Cortina" and then the often relaunched Cortina. The Zephyr, with the Zodiac, was the mainstay of the "Z-Cars" era. The Ford Prefect was almost identical to the Popular and Anglia. It later gave Douglas Adams the name of his hero in "The Hitch-Hiker's Guide To The Galaxy". The Velox was a series of Vauxhall models in the 1950s.
2. Getting the hang of it? OK, which of these was NOT a Morris?

The Oxford and Cowley were both named for the places where they were built. The Minor 1000 was so successful that every 1,000,000th car was called a "Minor 1000000" and painted a special colour (pinky mauve, if I remember right). Originally a response to VW's "Beetle" in 1948, it was still in production in a recognizable form as late as 1971.The Minx was a series of Hillman models launched in 1947 and produced throughout the 50s.
3. Which of these marks was not part of the "Rootes Group"

Sunbeam was the fourth member of the Group. Chrysler took over the group in the 1970s and briefly relaunched the old Talbot name. Bristol was an independent manufacturer. Its first cars were British versions of BMW's under license from the German company.
4. Which of these pairs of cars were not, at some time, just slightly different versions of the same model?

From 1959, the Austin Seven and Morris Mini-Minor were the first Minis. The Cambridge and Oxford were usually the same car with different badges and trim. The Prefect, Anglia (and the Popular) were, for much of the late 1950s, all variations on the same model with different appointments. The Alpine was a sports car while the Sceptre was a large luxurious "tank" of a car.
5. Which of these does NOT fit with the other three to make the name of a luxury car?

The Armstrong-Siddeley Sapphire was a lovely car to look at and ride in (says I, who had the honour) but I hear tell it was heavy to handle. I guess you were supposed to have a chauffeur anyway. The Standard Vanguard was a vehicle of an entirely different sort - small, practical, but a tad tinny.
6. Which of these did NOT make cars in the UK in the 1950s?

Leyland became "British Leyland" in the 1960s and included many big names including Austin, Morris, Jaguar, Rover and others but in the 50s it was only known for its buses and trucks. The other three are all high-end sports car manufacturers.
7. The name of Daimler has moved around over the years. Which of these has NOT been associated with it at some time, past or present.

"Mercedes" was originally a car produced by Daimler-Motoren-Gesellschaft (DMG) in Germany in 1900. Jaguar bought Daimler in the UK in 1959. The modern company is called Daimler-Chrysler after a merger in the 90s. Triumph was associated with Jaguar as part of Jaguar-Rover-Triumph during the gradual break-up of British Leyland, but never with Daimler.
8. Which of these never looked like a more luxurious Austin?

At various times, all of the other three badges have adorned what was basically an Austin OR Morris, but with added walnut, leather, chrome and/or muscle.
9. Which of these was a wheel short of a set?

The Vanguard and A40 were small cars, but with a full set of wheels. the AC Cobra was a sports car - with everything a sports car needs. The Robin? Better ask Batman where the other front wheel went.
10. As today, many cars had no names, just numbers. Which of these was NOT a British car of the 50s & 60s?

The 6/90 was the large Wolseley much loved by UK police forces of the time. Consequently, it featured in TV shows like "No Hiding Place" and "Dixon Of Dock Green". The A55 and A60 were generic names for the Cambridge/Oxford models. The Austin Seven has a long history but was, in its final manifestation, the original Mini. The Z5 is a BMW sports car that's MUCH too new for this quiz
Source: Author dyve 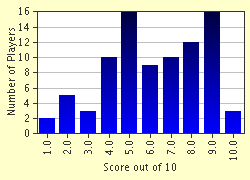 
Other Destinations
Explore Other Quizzes by dyve