Quiz Answer Key and Fun Facts
1. Which of these manufacturers produced a classic Mini or Mini variant?

The Riley Elf was manufactured from 1961 to 1969 and was the luxury version of the Mini. It had an extended boot and a Riley grille as well as updated trim. The remainder of the car was the same as a Mini Saloon.
2. In which of these locations was the classic Mini NEVER manufactured?

The Mini was first manufactured in England. South Africa and Australia also had factories and customized the Mini for their locations, such as having wind-up windows versus sliding windows. Minis were also built in other locations, such as New Zealand in "Complete Knock-down" or "CKD" format where all the parts were shipped to be assembled from England. No parts were made at these locations.
3. Which of these models had the fastest 0-60mph times in unmodified format?

The 1969 Mini Cooper S had a 1275cc engine with a 0-60mph time of 10.3 seconds. Alas, with the exception of the very limited run in 1990 of the ERA turbo, this was the high-point for the Mini as the "boy-racer" image made for high-insurance rates and made it very costly to own.
In spite of the exciting names, the Mini Racing and Mini Red Hot only had a 998cc engine with a 17.5 0-60mph time.
The 1275cc Mini Cooper 2000 did better with a 11.7 second 0-60mph time but was still slower than the Mini Cooper S made more than 30 years earlier.
4. Which of these Mini variants was designed with the British Army in mind?

The Mini Moke was a Jeep style Mini, but without the off-road capability. Early marketing to the Army showed the Moke's ability to both carry four soldiers and to be carried by four soldiers (much needed because of the poor ground clearance!). The name Moke came from an old dialect word meaning "donkey". The Moke was most successful in Australia where over 25,000 were produced.
5. Which of these wheel sizes was stock on a classic Mini?

The only wheel sizes that were stock on the classic Mini were 10 inch, 12 inch and 13 inch. The BMW Mini has the larger wheel sizes.

The 10 inch wheels take the same tires as do a modern golf cart. This is not recommended due to the higher speeds a Mini can attain!
6. What does the 'S' stand for on a classic Mini Cooper S?


Answer: No-one knows for sure

There are lots of theories, but no generally accepted answer. It certainly does not stand for "Supercharged", as no stock classic mini was ever supercharged.
7. Which classic Mini had a square front?

The Mini Clubman was a very 70s look and enthusiasts tend to either love it or hate it, although there is general agreement that the square nose makes it easier to work on the engine. The Mini Clubman was made from 1969-1980. The 1275GT model also had the Clubman square nose.
8. Which of these cars was supposed to replace the classic Mini?

In 1980 the Austin Metro was introduced with the intention of replacing the Mini. However, in 1997, after a production run of "only" 17 years the Metro was discontinued, while the classic Mini outlasted its replacement, being produced until 2000.
9. Which of these celebrities was a famous Mini owner?

Owning a Mini was a rite of passage for many English teenagers as second hand Minis were cheap and cheerful.
Paul McCartney owned a green customised 1965 Radford Cooper 'S with license plate number GGJ 382C.
While Winston Churchill was alive when the first Minis were made, he preferred more luxurious transport. Ricky Gervais did not have a drivers license growing up, so never owned a car.
10. Which of these is a real Mini variant model?

The Wolseley 1000 is a rare South African built Mini variant. Around 20 are known to survive out of a production run of 400. The Wolseley was a "luxury" version of the Mini in that it had a heater as standard equipment and carpet in the boot. As in most Wolseleys it has the Wolseley grill and a lit grill badge.
Source: Author whee 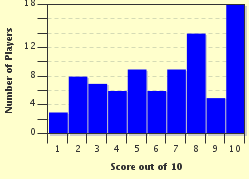 
Other Destinations
Explore Other Quizzes by whee