Test your knowledge of Penn State.

Quiz Answer Key and Fun Facts
1. In what year was Penn State founded?

The school was initially chartered by the Pennsylvania State Agricultural Society as a farming college. It was started in Centre County on 200 acres donated by ironmaster James Irvin of Bellefonte.
2. One going East and the other West, what are the two main, one-way streets running through State College?

Only tourists look both ways before crossing these streets, as traffic is only headed in one direction. Almost all of the entertainment, shopping, and cultural distractions in State College are located on these two streets (especially College Ave).
3. Where can one purchase a "Grilled Sticky"?

A "must eat" for anyone likes sweets. It's a grilled sticky bun, served warm, with or without ice cream. "The Diner" opened in 1933 and has been the subject of a PBS historic diners broadcast.
4. What building houses the administrative offices and has a clock tower whose chimes can be heard all over campus?

Originally built in 1863 and called the "Main Building", it was rebuilt in 1930. The limestone for the original building was hauled to the construction site by a mule named Old Coaly. Morbidly, Old Coaly's bones are on display at the HUB.
5. The student union is called the HUB. What does HUB stand for?

The HUB was built in 1953. Renovations were made in 1997 to increase its size to almost 250,000 square feet. It was named after Ralph Dorn Hetzel, a previous president of the university. The HUB houses, among other things, restaurants, a book store, an art gallery, an aquarium and Penn State's student run radio station.
6. What is the name of the arena on campus that the basketball team calls home?

In addition to basketball and concerts, each graduating class holds its commencement there. The BJC has 15,261 seats. It was named after former university president Bryce Jordan.
7. In what State College bar, located "directly above the center of the earth", can you drink "80 beers around the world"?

For those who like microbrews, Zeno's is the place to be. Don't order a Budweiser or Coors Light!
8. What is and will always be the most popular flavor at The Penn State Creamery?

I made up the other three flavors! Joe Paterno is the beloved coach of the football team.
9. What is the mascot of Penn State University?

The Nittany Lion is a mountain lion indigenous to Pennsylvania. It is purported that they still exist in the state, however, this has not been confirmed for some time.
10. Who was the starting tailback on Penn State's 1982 National Champion football team?

Warner was drafted third overall by the Seattle Seahawks. Cappelletti won the Heisman trophy in 1973. Dozier played on the 1986 championship team. Carter played for the undefeated 1994 team that should have won the title.
Source: Author clamking 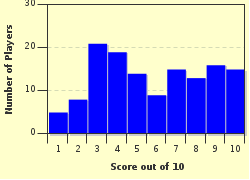 Related Quizzes
1. Where in the U.S. Are These Colleges? Average
2. Where Are These Schools? Average
3. Where is that College? Average
4. Locate the College Average
5. U.S. College Entrance Exams - Facts and Fiction Tough
6. US Colleges Difficult
7. Where Is This University? Average
8. Colleges and Universities Average
9. Where Did I Learn? Average
10. Ivy League Schools Difficult
11. US College Lists and Rankings Tough
12. Go, State! But Where? Average


Other Destinations
Explore Other Quizzes by clamking