Ranks in the Boy Scouts of America Quiz

The Boy Scouts of America was formed on February 8, 1910, by Baden Powell. This quiz consists of ten questions about its ranks.

Share on Facebook
Share on Twitter
Share by E-Mail
Author
Buddy1
Time
4 mins
Type
Multiple Choice
Quiz #
366,252
Updated
Dec 03 21
# Qns
10
Difficulty
Tough
Avg Score
6 / 10
Plays
280
This quiz has 2 formats: you can play it as a or as shown below.
Scroll down to the bottom for the answer key.

Quiz Answer Key and Fun Facts
1. Which of the following is a requirement to be a First Class Scout?

There are sixteen requirements to become a First Class scout. One of those is to complete the Boy Scouts of America swimming test. To pass the test, a scout must jump into a pool, swim 75 yards in a strong manner, swim 25 yards using a backstroke, and finally rest by floating. A Boy Scout must also complete this test by making one sharp turn, and the test must be done without stopping.

Other Tenderfoot requirements include explaining why the buddy system is used, demonstrating the Heimlich maneuver, and spending a night on a campout sleeping in a tent the Boy Scout pitched.
2. Which of the following ranks in the Boy Scouts of America is the highest?

In order, the ranks are Tenderfoot, Second Class, First Class, Star, Life, and Eagle. This means of the choices listed Eagle is the highest. Scout was not originally considered a rank, even though its requirements must be met before being a Tenderfoot. However, in 2016, it was changed so that Scout would be a rank.
3. What is the minimum amount of time a Star Scout must stay at that rank until he can become a Life Scout?


Answer: Complete a board of review


Answer: Complete an Eagle Scout board of review

It is believed that only about 3% of scouts become Eagle Scouts before either dropping out or reaching his 18th birthday.
Source: Author Buddy1

This quiz was reviewed by FunTrivia editor stedman before going online.
Any errors found in FunTrivia content are routinely corrected through our feedback system.
Most Recent Scores
Nov 29 2022 : Guest 180: 6/10
Oct 17 2022 : Guest 69: 7/10 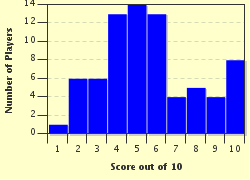