This quiz is designed to quiz you on aspects of one of US Cub Scouting's most popular activities, the Pinewood Derby! We'll cover some history and car specifications in this quiz.

Share on Facebook
Share on Twitter
Share by E-Mail
Author
captaindebacle
Time
3 mins
Type
Multiple Choice
Quiz #
266,678
Updated
Dec 03 21
# Qns
10
Difficulty
Average
Avg Score
6 / 10
Plays
469
This quiz has 2 formats: you can play it as a or as shown below.
Scroll down to the bottom for the answer key.

Quiz Answer Key and Fun Facts
1. The first Pinewood Derby was held in what year?

55 Cub Scouts from Pack 280C participated in the first Pinewood Derby race in Manhattan Beach, California on May 15, 1953. Cubmaster Don Murphy is credited with developing the idea because his son was too young to participate in Soap Box Derby.
3. Which year did the Pinewood Derby become an officially recognized part of the Cub Scout program?

The BSA officially incorporated the Pinewood Derby into the Cub Scout program in 1955. Plans for tracks and car specifications first appeared in the October 1954 issue of "Boys' Life" magazine.
4. According to the rules included with the car kit, what is the maximum amount the car may weigh when ready to race?

Each pack may adjust the specifications to suit their individual pack race. Most district, council, and multi-council races use the specifications listed in the kit instructions.
5. According to the rules included with the car kit, what is the maximum length of the car?

Cars are to be free-running, with no motors or mechanical assists of any kind.
7. Which of these would not be an acceptable way to add weight to a car?

Liquid weights are not permitted.

One year, a scout in our pack made his car with a cockpit and driver. During the race, the driver fell off of the car. It was then we discovered that the driver figure was made from a LIVE .45 caliber pistol round.
8. The minimum length of a Pinewood Derby track is 40 feet.

You need at least two lanes, but there is no set number. Our pack has a 4-lane track, and I have seen 3-lane, 6-lane, and even an 8-lane track.
10. 55 Cub Scouts participated in the first Pinewood Derby race in 1953. Fifty years later (in 2003), approximately how many Cub Scouts raced in Pinewood Derbies nationwide?

Don Murphy (the original creator of the Pinewood Derby) was on hand in Manhattan Beach for the 50th anniversary race.

Many other organizations (such as the YMCA) hold similar wood car races. There is even a competitive organization called the Woodcar Independent Racing League which holds sanctioned races.

This concludes our look at the Pinewood Derby race. I hope you have found this quiz to be fun and informative.
Source: Author captaindebacle

This quiz was reviewed by FunTrivia editor Bruyere before going online.
Any errors found in FunTrivia content are routinely corrected through our feedback system.
Most Recent Scores
Nov 26 2022 : Guest 108: 1/10
Oct 10 2022 : Guest 99: 9/10 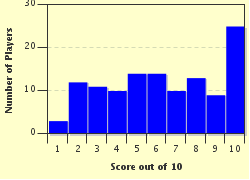 
Other Destinations
Explore Other Quizzes by captaindebacle