Scouting - Not So Trivial Trivia Quiz

Scouting is a worldwide movement for boys and girls, men and women. Many world and business leaders have been, or still are, Scouts. Just how much do you know about this movement?

Robert Baden Powell (Baden Powell, no hyphen, was his last name. Later he was honoured as Lord Baden Powell of Gilwell) was a distinguished British soldier. His book, 'Scouting for Boys' was based on his experiences in Africa and India. Churchill was British Prime Minister & Douglas Bader was a WWII airman who had lost his legs in a flying accident before the war. Kipling was a famous author whose books Baden Powell used as inspiration for Scouting for younger boys.
2. Scouting has a formal mission statement that explains its purpose. What is included in this mission?


Answer: To contribute to the education of young people

The mission of Scouting is to contribute to the education of young people, through a value system based on the Scout Promise and Law, to help build a better world where people are self-fulfilled as individuals and play a constructive role in society. This is achieved by:

- involving them throughout their formative years in a non-formal educational process.
- using a specific method that makes each individual the principal agent of his or her development as a self-reliant, supportive, responsible and committed person.
- assisting them to establish a value system based upon spiritual, social and personal principles as expressed in the Promise and Law.
3. Scouts were into icons well before computers and icon clip art came along. Scouts from all over the world wear a badge based on what icon?

The "fleur de lys" symbol is, in a heraldic context, usually associated with the French monarchy. However, it is believed that Baden Powell chose it because it often appeared as a directional symbol on maps, showing "north", and he wanted to imply that scouts "showed the way" through behaviour and example.

The other options are also used in heraldry. An escutcheon is a shield with a coat of arms, the acorn and leaves symbolize endurance, and the cross symbolizes redemption.
4. Scouts have their own language (to a degree anyway). What do they call one of their regular large gatherings?

Jamborees are a highlight of any Scout's life. They get to meet Scouts from around the world and undertake lots of exciting activities. Gymbaroo is a excellent pre-schooler physical development program, Ginganguli and Kumbaya are words from songs often sung at Scout gatherings.
5. Girl Guides (or Girl Scouts in some countries) were an offshoot of Scouting - which was originally for boys only. Who was first asked by the founder of Scouting to develop a similar program for girls?

At the Scouts' first rally, at Crystal Palace in 1909, Baden-Powell was faced with a small group of girls, representing hundreds of others, who insisted they wanted to be Scouts too. In 1910, he formed the Girl Guides, asking his sister Agnes to look after the new organisation. A few years later his wife Olave became involved and, in 1918, was appointed Chief Guide. Marcia is my Mum, Tabitha is my daughter. Neither of them have met Baden Powell.
6. Scouting Leaders must undertake training. What will a Leader wear to show that they have completed advanced training?

Uniform, badges and pins are used to denote various levels of training, but the Wood Bead Badge is the worldwide badge of advanced leader training. The original Wood Beads were taken by Baden Powell from a Zulu King's necklace.
7. Scouting developed largely spontaneously in response to 'Scouting for Boys'. In 1909 a Rally was held that led to a more formal organisation under the leadership of the founder. Where was this Rally held?

Crystal Palace is in London and Baden Powell called for the Rally here at the suggestion of King Edward. Over 11,000 boys, and a small number of girls, turned up. Brownsea Island is offshore from Poole in England and was the site of the first Scout camp in 1907. Gilwell Park is outside London and was bought for Scouts in 1919 by Mr de Bois Maclaren for Ł10,000. Cottermouth is a Scout Camp outside Canberra in Australia where I did my Leader training.
8. OK, let's test your knowledge of the special Scout language again. Most Scout uniforms include a brightly coloured scarf. Usually the scarf will identify where the Scout comes from, or at times such as during large gatherings, that they are part of that gathering. Scouts use a special fastener for their scarves. What do Scouts call this fastener?

The fastener is called a woggle. They can be made from a variety of materials - leather, canvas or even wood are the more common. The first woggle is reported as having been made by Bill Shankley who worked at Gilwell Park and was based on the Turks Head knot. The word 'woggle' is thought to have come from a term - 'Boon Doggles' - used in the USA for their original woggles using rings made of animal bones. 'Boon Doggles' itself was a corruption of 'dog bones'.

Boggle is a fun word finding game involving lettered dice. Oggel is a brand name for a strap that holds on swimming goggles while a toggle is a pin that is inserted into a loop in a rope, chain or strap to hold it fast.
9. Scouts have often been featured in the movies or on TV. What is the name of the 1966 Disney film starring Fred MacMurry as the somewhat reluctant Scoutmaster who later came to realise how Scouting had enriched not only the lives of his Scouts, but his life as well?

'Follow Me, Boys' is a good family film from gentler times. 'Be Prepared' is the universal Scouting motto. I made up 'Summer Camp' & 'The Long Hike', but who knows, they may be movies, but not from 1966, they didn't star Fred MacMurray and they have nothing to do with Scouting!
10. Scouting is about providing members with skills for life. What is something that a Scout might learn during Scouting activities?

That was an easy one to finish off. All of these and a whole lot more as well. Maybe you should get involved whatever your age!
Source: Author Stump1 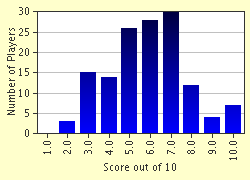 
Other Destinations
Explore Other Quizzes by Stump1