Girlguiding in the UK Trivia Quiz

I have been a Guide and am now a Brownie Guide Leader. I hope this quiz will give a little history and a flavour of what Girlguiding in the UK is all about.

Quiz Answer Key and Fun Facts
1. Who became the president of the Girl Guide Association when it was formed?


Answer: I will do my best to love my God and to be kind and helpful.

Rainbows are usually aged between five and seven (except in parts of Northern Ireland where girls can join as young as four years). Rainbows earn Roundabout badges for taking part in activities which they can sew onto their uniform.
3. The Rainbow programme is called the Rainbow Jigsaw. What four areas does it cover?

The four parts of the Rainbow jigsaw are designed to help the girls to take a look at the wider world; learn through fun activites; enjoy games, songs, parties and celebrations; and to gain a better understanding of love and helping others, thereby promoting a fuller understanding of the Promise.
4. Brownie Guides were formed in 1914 but were not originally called Brownies. What were they first known as?

Not many of the girls liked this name so Lord Baden-Powell changed their name to Brownies. The Brownies are open to girls between the ages of seven and ten. They meet in packs and are divided into groups called Sixes, who have names like Elves, Gnomes and Pixies, or are named after woodland animals. Each Six has a Sixer - usually the oldest or most experienced Brownie in that Six - and a Second to help her.
5. What is the adult Leader of a Brownie Pack usually called?

Other adult leaders in the pack are often called after owls too, common names being "Snowy" and "Tawny" Owls. There are also Young Leaders, helpers and Guides from the local unit, who are given names of the Brownies choice.
6. What is the Guide motto?

At age 10 Brownies move onto being Guides and new girls can join. Being a Guide is all about learning new skills, making your own decisions and having fun. It is generally much less structured than Brownies and incorporates many more outdoor activities.
7. Until it was retired in 2019, the Baden-Powell Challenge Award was the highest award a UK Guide could achieve.

According to the Girlguiding UK website this award was the highest achievement a guide could attain, but it ceased to be awarded in spring 2019. It consisted of 10 challenges chosen from different sections and culminated in a Baden-Powell Adventure which was normally a residential event organised at Division, County, Country/Region or Association level.
8. Girls can continue as Guides until they are 14 when they must leave or join "The Senior Section".

Girls can continue in Guides until they are 16, however they can join "The Senior Section" at age 14 if they wish.
In The Senior Section, young women participate in a fun and flexible programme known as "Look Wider". This programme is also linked to a variety of recognised qualifications or awards, both within and outside guiding. The Senior Section consists of both Rangers and Young Leaders.
9. At the 1926 World Conference what special day was named when Girl Guides from all over the world will remember each other and reaffirm their commitment to international friendship and understanding?

World Thinking Day is celebrated on 22 February because this marks the joint birthday of the Founder and the World Chief Guide, Lord Robert and Lady Olave Baden-Powell.
On this day, Girl Guides (all sections) all over the world do something special to celebrate such as holding an act of worship, having an international party or undertaking an extra service project.
10. After adult Leaders retire (at any age) what organisation can they join?

The Trefoil Guild is an organisation of over 20,000 members - mostly made up of women and men who have been and still are connected with Guiding and Scouting. However, even if you have never been involved in Guiding there is always a warm welcome for anyone who likes the idea of learning something new, travelling, meeting new people or getting involved in local Guiding projects. Find out more at http://www.trefoilguilduk.org.uk

If you want to find out more about Girl Guides in the UK this is the official website: http://www.girlguiding.org.uk
Source: Author April 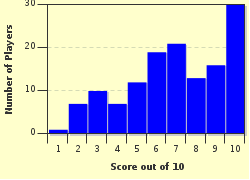 
Other Destinations
Explore Other Quizzes by April