The Girl Guides originated from the UK many years ago, so here is a quiz about their birth and subsequent development.

Quiz Answer Key and Fun Facts
1. In 1909, Robert-Baden Powell asked his sister to organise a version of the Boy Scouts for girls, which became the Girl Guides. What was his sister's name?

In 1909 there was a Boy Scout Rally at Crystal Palace in London. Among the multitude of Boy Scouts there was also a group of girls who approached Baden Powell and asked him to let girls be Scouts. He was somewhat reluctant, so as a sort of compromise he formulated the concept of the Girl Guides.

His sister Agnes was at first reluctant to take on this task, but it very quickly became popular and successful.
2. Who was appointed Chief Guide in 1918?

Robert's wife Olave was 32 years younger than Robert whom she met on a cruise.
She was appointed World Chief Guide in 1930, awarded the 'Silver Wolf' by the Scout Association for looking after Robert Baden-Powell and was awarded the 'Grand Cross of the British Empire' in 1932. When she was honoured with the 'Silver Fish', the pinnacle accolade in the Guide Association, hers was made of gold.
3. What were the Brownies originally known as?

Initially the girls were known as 'Rosebuds', but were renamed by Lord Baden-Powell after the girls had complained that they didn't like their name. Their name came from the story 'The Brownies' by Juliana Horatia Ewing, published in 1870.
4. Who became president of the association in 1965?

When Princess Mary died Princess Margaret became the new President. I don't know if the sixties English model Twiggy was a Girl Guide but she did write a book called 'A Guide to Looking and Feeling Fabulous Over Forty'.
5. Where is the memorial to Lord and Lady Baden-Powell?

Although their remains are buried in Kenya, positioned in the south aisle of Westminster Abbey is where you will find a memorial stone to Lord and Lady Baden-Powell.
6. Why did Baden-Powell not initially want girls to join the Scouts?


Answer: He saw scouting as an activity for boys

The rudimentary ethos of the Girl Guides was established in the beginning by giving their patrols names associated with flowers or birds, unlike the Scouts who had adopted predatory animal names. Contemporary Guides now have far more freedom in choosing patrol names and now select names that accentuate the modern ethos of the present day Guides.
7. What is the highest award a member of the UK Guiding Association can achieve?

The award which demands a great degree of commitment, is open to members of the Senior Section aged 16 to 25. Based on the concepts of personal challenge and participation it gives a chance for personal development through flexible and enjoyable activity. Areas covered in the award are; service in guiding, outdoor challenge, personal skill development, community action and residential experience. Personal skills such as; communication, time management, organisation, planning, evaluation and teamwork are particularly focused upon. On completion of the 'Queen's/King's Guide Award', the participant is presented with a silver brooch, and a certificate signed by the reigning monarch.
8. Former Girl Guide Helen Sharman is famous as what?

In 1991, 27 year old Helen Sharman became the first Briton in space. The former Girl Guide, answered an advertisement broadcast on the radio which said, "Astronaut wanted. No experience necessary." She was selected from over 13,000 applicants, a great testament to the Guiding experience.
9. What was the first Girl Guide Handbook called?


Answer: How Girls Can Help to Build Up the Empire

The handbook was produced by Robert Baden-Powell and his sister Agnes in 1912 and comprised 475 pages. The other three options are lines from the 'Guides Promise'.
10. Which of the following is not included in the 'Guide Law'.


Answer: A Guide must try to do a good turn everyday.

It is both the Brownies and Wolf Cubs that must do a 'good turn everyday'.
The Guide Law:
A Guide is honest, reliable and can be trusted.
A Guide is helpful and uses her time and abilities wisely.
A Guide faces challenges and learns from her experiences.
A Guide is a good friend and a sister to all Guides.
A Guide is polite and considerate.
A Guide respects all living things and takes care of the world around her.
Source: Author jimpimslim1 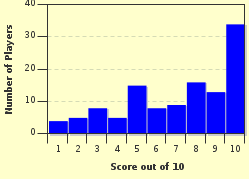 
Other Destinations
Explore Other Quizzes by jimpimslim1