For those who are members of Scouts Australia, this quiz should be fairly easy. For those who aren't, I encourage you to give the quiz a go - you will learn something new.

Quiz Answer Key and Fun Facts
1. What is the Scout motto?

Every Scout should know this motto! When Baden Powell, the founder of Scouting, was once asked what a Scout must be prepared for, he said "Why any old thing". "On My Honour" is part of the Scout Promise, "For Life" is the motto of Volvo, while "Scouts Together We Stand" is a song title.
2. Can girls join Scouts?

It is a common misconception that Scouts is only for boys. This used to be the case, however, now girls are just as welcome to join in the fun.
3. Where was the 2007 Australian Jamboree held, and what were the conditions like?

Elmore is near Bendigo, in Victoria. If you see any photos from the Jamboree, you will understand what I mean when I say it was dusty! All the Scouts came home covered in dust!
4. What are the names of the sections within the movement?

Each section has their own name, colour and characteristics. For example, the Cub section is called a Pack, has yellow as a colour and is modelled on "The Jungle Book" by Rudyard Kipling.
5. Australian Scouting celebrates its 100th birthday the same year as Scouting worldwide.

False - Scouting was brought to Australia a year after it began in Britain. This means Australian Scouting celebrates 100 years in 2008 while Scouting worldwide turns 100 in 2007.
6. Which of these is an actual Venturer Scout badge (tape)?

Expeditions 1 is a compulsory badge (tape) for a Queen Scout Award, the highest award in Venturers. Expeditions 2 is optional and requires more effort. Both tapes, however, require a Venturer to plan, organise and complete a hike of at least two days.
7. When you become a registered member of Scouts Australia, you receive a membership number.

These numbers are used in administration. They can also be used to track lost property.
8. Which animal's home is also the name of a meeting place for a Scout Group?

A Scout Group meets at their den, which is normally a small building with a parade ground nearby. Often a den can be old or shabby, as any funds raised normally go into buying equipment or funding activites, not renovating the den.
9. What is the name of the section for children aged under five?


Answer: There is none

When a child turns 5, they can join Joey Scouts. Until this age they cannot officially join, but may participate in activities designed for the whole family (e.g. a Family Camp).
10. Is there a badge for speaking a foreign language?

The requirements differ depending on what section you are a part of, but basically you have to speak, write and translate the language to qualify for the badge.
Source: Author tenorsax2 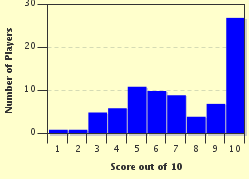 
Other Destinations
Explore Other Quizzes by tenorsax2