Join the ladies from 4Pi as they travel around the world on the Amazing Race. Don't forget to 'smile' for their photos while you figure out where they are.

A multiple-choice quiz by Team Pi in the Sky. Estimated time: 3 mins.

Quiz Answer Key and Fun Facts
1. The 4Pi ladies have travelled to a European country to sample a traditional onion pie and their favourite black forest cake. Which country would you be in if the photographer told you to "Lächeln"?

German is the most widely spoken language in the European Union, with almost 90 million people world-wide using it as their primary language. It is also the third most commonly taught language in English-speaking schools, behind French and Spanish.

The zwiebelkuchen is an onion pie from Swabia in south-central Germany. Once a year in Autumn, winemakers serve the traditional onion pie with new wines. Visitors trying the pie and 'green' wine for the first time should be cautious. The mix of onions and wines may have disastrous consequences!

Black Forest cake really needs no introduction. Layers of chocolate liqueur cake with whipped cream and cherries between each layer. Add more cream over the cake, add maraschino cherries and shaved chocolate and watch it disappear.
2. The Pi ladies now travel to Northern Europe to a constitutional monarchy where they pose for photos near the Christiansborg Palace and the statue of the Little Mermaid. Don't forget to "smil"!

The Danish language is a West Germanic language that evolved into Old Norse by the 8th Century. It further split and evolved into Old West Norse and Old East Norse, the latter being the version spoken in Denmark.

The Little Mermaid is a character created by Danish legend Hans Christian Andersen. The statue, sculpted by Edvard Eriksen, is situated in the harbour in Churchill Park.

The Christiansborg Palace had been extensively remodelled following fires at the end of the 18th and 19th centuries. It is home to the Supreme Court and the Danish parliament.
3. The ladies are now in a part of the United Kingdom that used to have its own language. Some people still speak it, and as we pose in front of a famous signpost the photographer asks us to "gwenwch". Where are we?

The Welsh language in recent decades has seen a move to revive itself, and it is now taught in many schools, with a lot of children now being bilingual. In 2002 it gained official recognition from the European Union as a regional or minority language.
4. The ladies are now visiting a country famous for its tulips, cheese and windmills. "Lachen" for the camera so we can record our visit to which low-lying country?

The Dutch language is the native tongue for the majority of the population of the Netherlands, Belgium and Suriname. The Cape Dutch (Dutch and Flemish)dialects of Southern Africa have evolved to become the Afrikaans language of today.

From March until May, the Keukenhof flower garden near Lisse is home to one of the most spectacular flower shows in the world. During the Dutch Spring, an area of 17500 hectares is covered in a carpet of flowers. More than half of these are the traditional tulip.
5. In which language, spoken in a Northern European country with a blue and white flag, would the photographer ask the ladies of Pi to "hymy!" for the camera?

Finnish is spoken as the primary language by over 90% of the population of Finland. The other languages of the country are Swedish and Sami. It is used as a minor language in Sweden and Estonia and is an official language of the European Union.
6. In which country, the birthplace of Pope John Paul II, would the ladies of Pi be invited to "usmiechnij się" for the camera?

Polish is one of the West Slavic languages and is spoken by almost 97% of the inhabitants of that country as well as in the Polish diaspora. It is written using the Polish alphabet which has more letters than ours. It is most closely related to Russian and has similar grammatical rules.
7. The intrepid ladies are off to a safari in Kruger National Park. Which language would their guide be speaking if he asked them to "glimlag" nicely for their photos?

Afrikaans is a West Germanic language derived from the Dutch dialects of the 17th century. While it is spoken natively in South Africa and Namibia, it is also spoken to a lesser degree in Botswana and Zimbabwe.

The Kruger National Park is one of the world's largest game reserves. It is well known for its vast landscape, spectacular African wildlife and unique biodiversity. Not only can you see lions, elephants, leopards, Rhinoceros and buffalo in the wild but there is also an abundant bird life to watch.
8. The ladies are really globetrotting now! This time they're off to South America's largest country. What language is the photographer speaking when he asks the ladies to "sorrir" in front of the Christ the Redeemer statue?

Portuguese is the official language in nine different countries, including Portugal and Brazil. It is classified as a Romance language, and has been called sweet by Spanish author Miguel de Cervantes and playwright Lope de Vega.

The giant statue of Jesus Christ, known as 'Christ the Redeemer' is situated atop Corcovado Mountain and is considered to be one of the New Seven Wonders of the World.
9. "Sorriso, sorriso" calls the photographer as the team pose to throw their coins into the fountain. Which country are they in now?

While we throw our coins into the Trevi fountain in Rome we reflect on the fact that Italian is one of the Romance family of languages, spoken mainly in Europe. It is one of the four official languages of Switzerland. There are pronounced differences in regional dialects throughout Italy, as well as between north and south.
10. Team 4Pi have decided to explore the delights of the east. Arriving in cherry blossom time they have no problem in summoning up a "hohoemi" when asked to do so by the photographer. Which language have they been asked to smile in this time?

Cherry blossom time is very important in Japan. Families make a virtual pilgrimage to see the trees in full blossom, taking picnics with them and having a blossom party. The weather bureau give out a daily blossom forecast.

Japanese is not widely spoken outside of Japan. There are immigrant communities in various countries that speak it, but it is not normally taught as a second language in schools around the world. This is possibly due to the fact that how you address someone in Japanese depends on their status, and is quite rigid and formal. A certain knowledge of how Japanese society functions is needed to master this.
Source: Author leith90 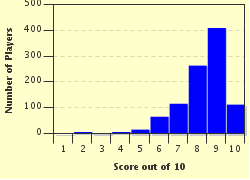 Related Quizzes
This quiz is part of series Itchy Feet:

An assortment of quizzes about travel, holidays and things to see.